The Focolare Movement is an international organization that promotes the ideals of unity and universal brotherhood. Founded in Trent, northern Italy, in 1943 by Chiara Lubich as a Catholic movement, it remains largely Roman Catholic but has strong links to the major Christian denominations and other religions, or in some cases with the non-religious.

The Focolare Movement operates in 180 nations and has over 140,440 members. The word "Focolare" is Italian for "hearth" or "family fireside". [3] While Focolare is the common sobriquet given to this organisation, its official name when approved in 1990 as an International Association of the Faithful of Pontifical Right, was "Work of Mary". [4]

In the Northern Italian city of Trent in 1943, in the climate of violence and hatred of the Second World War, the young elementary school teacher Chiara Lubich saw God's love as the only antidote when civil life was crumbling around her. With her Bible in hand while sheltering during air raids, she felt deeply Jesus' desire "that they all may be one." A group sharing her vision joined in helping those in the shelters and in the poorest parts of town, and numbers grew. In 1948, the journalist Igino Giordani, a member of Parliament and pioneer of ecumenism, joined the group, bringing his ideal of social unity. Another co-founder was Fr. Pasquale Foresi with his theological background, and founder of New City Press in 1964. [4]

After 1949, summer vacations together in Fiera di Primiero in the Dolomite Mountains led to the desire to share – materially, culturally, and spiritually. Numbers increased for these retreats, including priests and religious with a variety of spiritualities, and by 1955 this gathering took on the name "Mariapolis", a model of peace for the world under Mother Mary's patronage. In 1962 Chiara's visit to the Benedictine Einsiedeln Abbey in Switzerland made her dream of permanent towns of brother/sisterhood, "simple houses, workplaces, schools – just like an ordinary town." In 1964 Loppiano, the first permanent Mariapolis was built on land donated by Vincenzo Folonari, near Florence. It has grown to include 900 people of worldwide origins and diverse occupations, married and single, priests and religious, who work and study together and strive to live in exemplary Christian charity. Each year an average of 40,000 visitors pass through Loppiano.[ citation needed ]

According to the movement twenty four other such towns have sprung up worldwide. [5] Some have specific emphases: ecumenism (Ottmaring, Germany; [6] Welwyn Garden City, Great Britain); ecology (Rotselaar, Belgium); interreligious dialogue (Tagaytay, Philippines); multi-ethnic harmony (Luminosa, New York; Križevci, Croatia); or inculturation (Fontem, Cameroon; Kenya; Ivory Coast [7] ). In these towns religious and cultural differences are respected, to exemplify Jesus' dream: "Father, may they all be one, as you and I are one." [8]

The president of the Focolare Movement, who is always a lay woman, [4] is Maria Voce, first elected in 2008. [9] [10] [11] The chief goals of the movement are: to cooperate in the consolidation of unity in the Christian world, with individuals and groups, movements, and associations; to contribute to full communion with Christians of different churches; and to work towards universal brother/sisterhood of all peoples, regardless of religious beliefs.[ citation needed ]

The movement has branched out to address a variety of groups including families, youth, and different religions. Special projects have sprung up within the movement, such as the "Abba" school, [12] Young People for a United World (now Youth for a United World), Teens4unity, [13] Economy of Communion (involving 800 companies), evangelism within small cities, social work, the Igino Giordani Centre, [14] and 27 publishing houses. [15] Pope Francis in praising Economy of Communion called on it to change "the rules of the game of the socio-economic system." [16] John L. Allen Jr. has observed that it is hard to "pick a fight with a focolarino. ...They tend to be open, ego-free, and just relentlessly nice." [17]

Focolare has 140,440 members in more than 180 countries. People more broadly involved in the movement are estimated by the Vatican at 4.5 million. [4]

At a reorganizational meeting in 2014 newly elected council members had an average age 16 years younger than that of the previous council, and the 30 council members came from 20 different countries. In Pope Francis' address to the reorganizational meeting, he said: "The Work of Mary, that everyone knows as the Focolare movement, was a little seed in the Catholic Church’s womb, that in the course of the years has brought to life a tree which now extends its branches in all the expressions of the Christian family and also among members of different religions and among many who cultivate justice and solidarity together with the search for truth." Francis went on to describe elements of the movement as contemplation, going out to engage in dialogue and formation of youth. Of contemplation he said: “We need to contemplate God and the beauty of his love,” keeping in mind that “to contemplate means to live together with brothers and sisters, breaking with them the bread of communion and fraternity,” since “contemplation that leaves people outside is a lie, it is narcissism.” [11]

New City Press, established in 1964, is the official publishing house for the Focolare movement, publishing books, periodicals, and e-books. [18] Among its publications are the Spirituality of Unity series, featuring the works of founder Chiara Lubich, and Understanding the Scriptures, Bible commentaries by scholars such as Daniel J. Harrington, Dianne Bergant, [19] Robert Karris, [20] and Ronald Witherup. [21] NCP publications include: the academic journal Sophia twice a year; three quarterlies – Gen's on ecclesial commitment [22] as well as New Humanity, [23] [24] and Unity and Charisms; [25] the bimonthly Teens for children; and the monthly periodicals Città Nuova (published in 38 different national or regional formats; known as New City in the UK, and as Living City in the US) with opinion and dialogue, [26] Big Smart Kids including inserts for educators, and Gospel of the Day. [27] 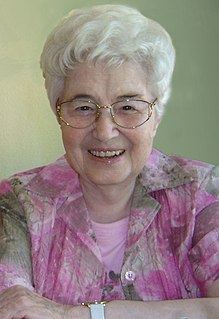 Chiara Lubich, was an Italian teacher and author who founded the Focolare Movement, which aims to bring unity among people and promote universal family.

Maria Orsola Bussone was an Italian Roman Catholic and a member from the Focolare Movement. Bussone's involvement in her adolescence in parish activities led her to Catholic Action as well as to other movements that she served as an active participant; she learnt the guitar and liked sports and music which she engaged in with her close friends. But those who knew her attested to her deep spiritual desires which she found sated in the Focolore Movement that she first came into contact with in the late 1960s. Bussone desired to act as a vessel for the goodness of God and desired that He would "... use me as He wants". Bussone died in an accident in 1970 and there were immediate calls to launch a process for beatification due to the impact she had made on local communities.

Bernard Longley is an English prelate of the Roman Catholic Church. He was named the Archbishop of Birmingham on 1 October 2009, and installed by Bishop David McGough and presented with his crozier by Archbishop Vincent Nichols, his predecessor, in St Chad's Cathedral at a Solemn Mass on 8 December 2009, the Feast of the Immaculate Conception, attended by 600 people. Previously he was an Auxiliary Bishop of Westminster.

Renato Corti was an Italian cardinal and prelate of the Roman Catholic Church. He was Bishop of Novara from 1990 to 2011. Pope Francis raised Corti to the rank of cardinal on 19 November 2016.

The Economy of Communion (EOC) project is an initiative of the international ecclesial and ecumenical Focolare Movement, and is a concrete attempt to address acute social problems by creating businesses that are integral parts of their communities. The project requires member businesses to commit, after an appropriate investment in the sustainability of the business, a part of their profits to direct aid for those in need and another part toward nurturing a “culture of giving”(http://www.edc-online.org). The EOC presents examples of companies that are both successful global competitors as well as clear and intentional manifestations of “lived” faith in the business world. It was started by Chiara Lubich in May 1991, in São Paulo, Brazil, with the aim of building a human society where, following the example of the first Christian community in Jerusalem, "no one among them was in need".1 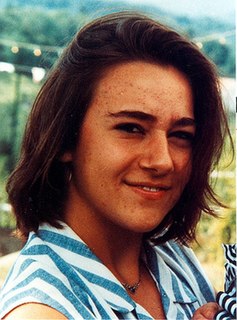 Chiara Badano was a young Italian teenager who is currently in the process of being pronounced a saint by the Catholic Church. At age nine she joined the Focolare Movement and received the nickname "Luce" by the founder Chiara Lubich. When she was 16 she was diagnosed with osteogenic sarcoma, a painful bone cancer. Badano succumbed to the cancer on October 7, 1990, after a two-year battle with the disease. She was beatified on September 25, 2010, at the Sanctuary of Our Lady of Divine Love in Rome. Her feast day is celebrated on October 29.

Igino Giordani, was an Italian politician, writer and journalist, born at Tivoli. He was also a significant figure in the Catholic/ecumenical Focolare Movement.

Brendan Leahy is an Irish Roman Catholic prelate and theologian who has served as Bishop of Limerick since 2013.

Klaus Hemmerle was a Roman Catholic bishop in Aachen, Germany. He was ordained as a priest in 1952 and became bishop of the Diocese of Aachen in 1975. He was inspired by Chiara Lubich, who said she was also inspired by him and considered him one of the co-founders of the Focolare Movement due to his teachings on theology and philosophy, and particularly his views on plural thinking and unity.

Pasquale Foresi was an Italian priest and theologian. He was connected to the Focolare Movement co-founded by him, Chiara Lubich and Igino Giordani. The Focolare Movement is an international organization that promotes the ideals of unity and universal brotherhood with other religious movements.

Maria Voce is an Italian lawyer and former president of the Focolare Movement. She was born in Calabria, Italy. She was elected as the president by the General Assembly of the Movement after the death of its founder Chiara Lubich, in March 2008.

Daniela Zanetta was an Italian Roman Catholic laywoman and a member from the Focolare Movement. From her birth she suffered from a rare skin disease that weakened her over time and which would cause skin tears and blistering. Her condition also forced frequent visits to the hospital and blood transfusions. Zanetta tried to put her illness behind her so that she could live a normal adolescent life with her friends and in her free time collaborated with her local parish. Zanetta worked with the Focolare Movement that she joined after being drawn to their charism and that of its founder.

Janina Hiebel is a German-born biblical scholar now residing in Australia who works at the University of Divinity in Melbourne, Australia. Her research interests are in the period of the Babylonian Exile, particularly the book of the prophet Ezekiel. 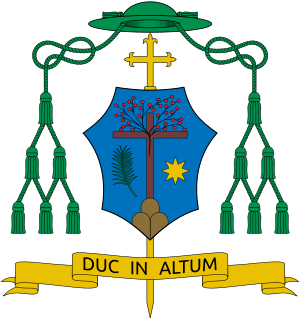 Marco Salvi is an Italian prelate of the Catholic Church who has been auxiliary bishop of Perugia–Città della Pieve since 2019.