Aid to the Church in Need

Aid to the Church in Need (German : Kirche in Not, Italian : Aiuto alla Chiesa che Soffre) is an international Catholic pastoral aid organization, which yearly offers financial support to more than 5,000 projects worldwide.

The roots of Aid to the Church in Need (ACN) go back to the time after World War II. For the Dutch priest Werenfried van Straaten [2] [3] the Stunde Null was the starting point of his life's work. In 1947 he founded Aid to the Eastern Priests, centred in Belgium, aimed mostly at providing material and pastoral support to displaced Germans, including Catholic priests from East Germany. Although the initial goal was to aid refugees who fled or were expelled from Eastern Europe in the wake of the Second World War, many of them Catholic, [2] in 1952 the organisation began to work to help persecuted Christians behind the Iron Curtain. In 1961 work spread to Christians in difficulty in Asia, and in 1965 to Africa [4] .

In 1984 ACN was recognised as a Universal Public Association of Pontifical Right, and later, during his pontificate, in December 2011, Pope Benedict XVI recognised the importance of Aid to the Church in Need's work by elevating the charity to a Pontifical Foundation of the Catholic Church. At the same time, the Pope appointed the Prefect of the Congregation for the Clergy, Cardinal Mauro Piacenza, to the position of President of the Foundation. [5] [6]

By a personal decision of Pope John Paul II, in 1992, following the end of communism across most of Eastern Europe, ACN begins to work towards dialogue with the Russian Orthodox Church, and in 2007 Benedict XVI asks the organisation to intensify its work in the Middle East, as Christians face rising persecution there. [4]

In 2019 Aid to the Church in Need becomes involved in the Safeguarding project, helping local churches to introduce measures to prevent abuse, and encouraging safeguarding courses for priests and religious worldwide. [7]

In 2021 Die Zeit published an article which made known the existence of a letter from 2010 indicating that Werenfried van Straaten was accused of committing sexual assault in 1973 against a 20-year-old woman working for the charity. [8] [9] In a statement consisting of questions and answers, the charity responded to the disclosure and noted that "ACN deeply regrets the serious allegations and condemns any kind of behavior of which Father van Straaten has been accused in the article." [10] 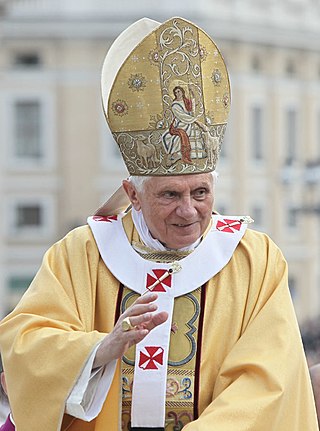 Pope Benedict XVI was the head of the Catholic Church and sovereign of the Vatican City State from 19 April 2005 until his resignation on 28 February 2013. Benedict's election as pope occurred in the 2005 papal conclave that followed the death of Pope John Paul II. Benedict chose to be known as "Pope emeritus" upon his resignation, and he retained this title until his death in 2022. 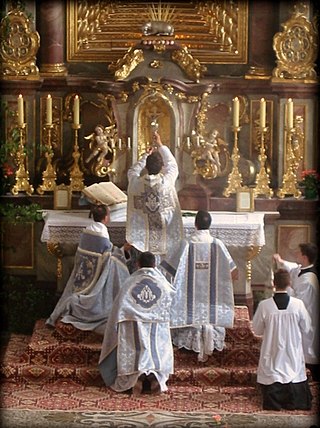 Traditionalist Catholicism is the set of beliefs, practices, customs, traditions, liturgical forms, devotions, and presentations of Catholic teaching that existed in the Catholic Church before the reforms of the Second Vatican Council (1962–1965), in particular attachment to the Tridentine Mass, also known as the Traditional Latin Mass.

Francis Arinze is a Nigerian cardinal of the Catholic Church. He was Prefect of the Congregation for Divine Worship and the Discipline of the Sacraments from 2002 to 2008 and before that led the Secretariat for Non-Christians from 1984 to 2002.

Werenfried van Straaten, born Philippus Johannes Hendricus van Straaten O. Praem., was a Dutch Catholic priest and social activist. He was a Premonstratensian priest expatriate in Germany, who became known for his charitable work across the world. He was the founder of the Catholic charity Aid to the Church in Need. 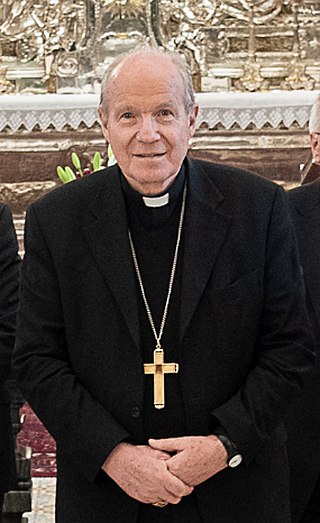 Christoph Maria Michael Hugo Damian Peter Adalbert Graf von Schönborn, O.P. is a Bohemian-born Austrian Dominican friar and theologian, who is a cardinal of the Catholic Church. He serves as the Archbishop of Vienna and was the Chairman of the Austrian Bishops' Conference from 1998 to 2020. He was elevated to the cardinalate in 1998. He is also Grand Chaplain of the Order of the Golden Fleece, of which he has been a member since 1961. He is a member of the formerly sovereign princely House of Schönborn, several members of which held high offices of the Holy Roman Empire and the Catholic Church as prince-bishops, prince-electors and cardinals. 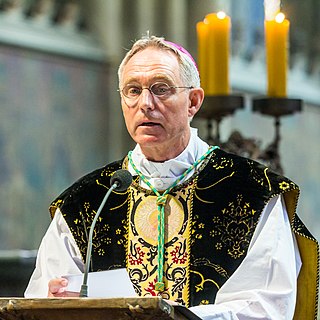 Georg Gänswein is a German prelate of the Catholic Church, who serves as Prefect of the Papal Household, and was personal secretary to Pope Benedict XVI. He was a professor of canon law at the Pontifical University of the Holy Cross for about a decade and has been Titular Archbishop of Urbs Salvia since 2012. 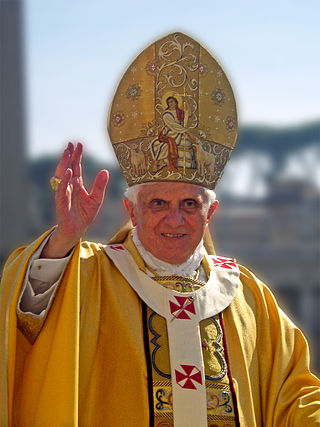 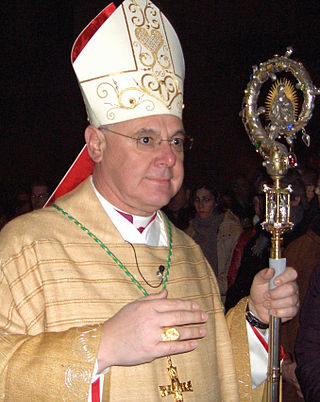 Gerhard Ludwig Müller is a German cardinal of the Catholic Church. He served as the Cardinal-Prefect of the Dicastery for the Doctrine of the Faith (CDF) from his appointment by Pope Benedict XVI in 2012 until 2017. He was elevated to the rank of cardinal in 2014.

Cyril Vasiľ S.J. is a Slovak Jesuit, eparchial Bishop of Slovak Catholic Eparchy of Košice and Archbishop ad personam, who has been a prelate of the Slovak Greek Catholic Church since Pope Francis named him Apostolic Administrator of the Slovak Catholic Eparchy of Košice on 20 January 2020. He has been professor and Rector of the Pontifical Oriental Institute, a titular archbishop from 2009 to 2021, and Secretary of the Congregation for the Oriental Churches from 2009 to 2020.

Robert Sarah is a Guinean prelate of the Catholic Church. A cardinal since 20 November 2010, he was prefect of the Congregation for Divine Worship and the Discipline of the Sacraments from 23 November 2014 to 20 February 2021. Sarah previously served as secretary of the Congregation for the Evangelization of Peoples under Pope John Paul II and president of the Pontifical Council Cor Unum under Pope Benedict XVI.

Bechara Boutros al-Rahi is the 77th Maronite Patriarch of Antioch, and head of the Maronite Church, a position he has held since March 15, 2011, succeeding Patriarch Nasrallah Boutros Sfeir. Rahi was made a cardinal on 24 November 2012 by Pope Benedict XVI.

Sviatoslav Shevchuk has been the Major Archbishop of the Ukrainian Greek Catholic Church (UGCC) since 25 March 2011, serving as the Eastern Catholic church's leader.

Ignatius Ayau Kaigama is a Nigerian prelate of the Catholic Church. He was the pioneer Bishop of Jalingo Diocese from 1995; transferred to Jos as Archbishop in 2000, and in 2019, he was named the Coadjutor Archbishop of Abuja Archdiocese, and he has been the substantive Archbishop of Abuja since 5 December, 2019. 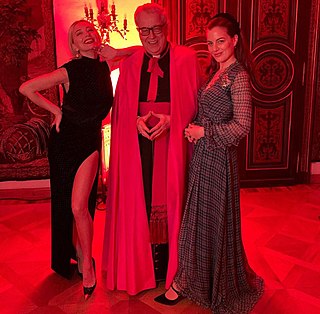 Wilhelm Imkamp is a German Catholic priest, theologian, and church historian. A former member of the Papal household, he was appointed as a Prelate of Honour of His Holiness in 2006 and an Apostolic Protonotar in 2012 by Pope Benedict XVI. Imkamp serves as a consultant for the Congregation for the Causes of Saints and the Congregation for Divine Worship and the Discipline of the Sacraments and is a member of the Pontifical Academy of Theology, The German Association of the Holy Land, and the European Academy of Sciences and Arts. He is a knight of the Order of the Holy Sepulchre, the Sovereign Military Order of Malta, and the Order of Parfaite Amitié. 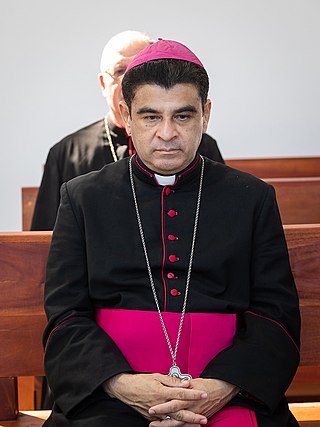 Rolando José Álvarez Lagos is a Nicaraguan prelate of the Catholic Church. He has served as the Bishop of Matagalpa since 2011 and apostolic administrator of Estelí since 2021.

On 31 December 2022, at 09:34 Central European Time (UTC+01), Pope Benedict XVI died at the Mater Ecclesiae Monastery in Vatican City at the age of 95. He had been pope emeritus since his resignation as the leader of the Catholic Church in 2013 due to ill health. Days earlier, Pope Francis, Benedict's successor, announced a deterioration in his health and asked the faithful for prayers. His death ended a nine-year period during which a current pope and a retired pope both lived within Vatican City.