The Nova Vulgata (complete title: Nova Vulgata Bibliorum Sacrorum Editio, transl. The New Vulgate Edition of the Holy Bible; abr. NV), also called the Neo-Vulgate, is the official Classical Latin translation of the original-language texts of the Bible published by the Holy See. It was completed in 1979, and was promulgated the same year by John Paul II in Scripturarum thesaurus . A second, revised edition was published in 1986. It is the official Latin text of the Bible of the Catholic Church. The Nova Vulgata is also called the New Latin Vulgate [1] or the New Vulgate. [2]

Before the Nova Vulgata, the Clementine Vulgate was the standard Bible of the Catholic Church. [3]

The Nova Vulgata is not a critical edition of the historical Vulgate. Rather, it is a text intended to accord with modern critical editions of the Hebrew and Greek Bible texts, and to produce a style closer to Classical Latin. [4]

Elaboration of the text

In 1907, Pope Pius X commissioned the Benedictine Order to produce as pure a version as possible of Jerome's original text after conducting an extensive search for as-yet-unstudied manuscripts, particularly in Spain. [5] Pope Pius XI established the Pontifical Abbey of St Jerome-in-the-City in 1933 to complete the work.

By the 1970s, the Benedictine edition was no longer required for official purposes because of liturgical changes that had spurred the Holy See to produce a new translation of the Latin Bible, the Nova Vulgata. [6] In consequence, the abbey was suppressed in 1984. [7] Five monks were nonetheless allowed to complete the final two volumes of the Old Testament, which were published under the abbey's name in 1987 and 1995. [8]

The Second Vatican Council in Sacrosanctum Concilium mandated a revision of the Latin Psalter, to bring it in line with modern textual and linguistic studies while preserving or refining its Christian Latin style. In 1965, Pope Paul VI appointed a commission to revise the rest of the Vulgate following the same principles. The Commission published its work in eight annotated sections and invited criticism from Catholic scholars as the sections were published. The Latin Psalter was published in 1969, the New Testament was completed by 1971, and the entire Nova Vulgata was published as a single-volume edition for the first time in 1979. [9]

The foundational text of most of the Old Testament is the critical edition commissioned by Pope Pius X and produced by the monks of the Benedictine Abbey of St. Jerome. [9] The foundational text of the Books of Tobit and Judith is from manuscripts of the Vetus Latina , rather than the Vulgate. The New Testament was based on the 1969 edition of the Stuttgart Vulgate, and hence on the Oxford Vulgate. All of these base texts were revised to accord with the modern critical editions in Greek, Hebrew, and Aramaic. [10] A number of changes were also made where modern scholars felt that Jerome had failed to grasp the meaning of the original languages, or had rendered it obscurely. [11]

In 1979, after decades of preparation, the Nova Vulgata was published, and was made the official Latin version of the Bible of the Catholic Church in the apostolic constitution Scripturarum thesaurus , promulgated by Pope John Paul II on April 25, 1979. [6] [13] The NV was published the same year. [12]

A second edition, published in 1986, added a Preface to the reader, [11] an Introduction to the principles used in producing the Nova Vulgata, [14] and an appendix containing three historical documents from the Council of Trent and the Clementine Vulgate. [15]

In 2001, the Congregation for Divine Worship and the Discipline of the Sacraments released the instruction Liturgiam authenticam . This text stated the Nova Vulgata was "the point of reference as regards the delineation of the canonical text". Concerning the translation of liturgical texts, the instruction states:

Furthermore, in the preparation of these translations for liturgical use, the Nova VulgataEditio, promulgated by the Apostolic See, is normally to be consulted as an auxiliary tool, in a manner described elsewhere in this Instruction, in order to maintain the tradition of interpretation that is proper to the Latin Liturgy. [...] [I]t is advantageous to be guided by the Nova Vulgata wherever there is a need to choose, from among various possibilities [of translation], that one which is most suited for expressing the manner in which a text has traditionally been read and received within the Latin liturgical tradition. [16]

This recommendation is qualified, however: the instruction specifies that translations should not be made from the Nova Vulgata, but rather "must be made directly from the original texts, namely the Latin, as regards the texts of ecclesiastical composition, or the Hebrew, Aramaic, or Greek, as the case may be, as regards the texts of Sacred Scripture". The instruction does not recommend translation of the Bible, or of the liturgy, based solely upon the Latin Nova Vulgata; the NV must instead simply be used as an "auxiliary tool". [17]

When translating the Tetragrammaton, Liturgiam authenticam says that "[i]n accordance with immemorial tradition, which indeed is already evident in the above-mentioned Septuagint version, the name of almighty God expressed by the Hebrew tetragrammaton and rendered in Latin by the word Dominus, is to be rendered into any given vernacular by a word equivalent in meaning." [18]

Most of the approximately 2,000 changes made by the Nova Vulgata to the Stuttgart Vulgate text of Jerome's version of the Gospels are minor and stylistic in nature. [19] [20]

In addition, in the New Testament the Nova Vulgata introduced corrections to align the Latin with the Greek text in order to represent Jerome's text, as well as its Greek base, accurately. This alignment had not been achieved earlier, either in the edition of 1590 or in the 1592 edition of the Vulgate. [20]

The NV contains only the Biblical canon of the Catholic Church, and not other pseudepigraphical books "often associated with the Vulgate tradition." [12]

Use of the Nova Vulgata

William Griffin used the Nova Vulgata for his Latin-to-English translation of the Books of Tobit, Judith, 1 and 2 Maccabees, Baruch, Wisdom, Sirach, and the additions to Esther and to Daniel for the Catholic/Ecumenical Edition of The Message Bible. [1]

According to Protestant university professor Benno Zuiddam, [22] [ failed verification ] many of the NV's New Testament readings are not found in any Latin manuscripts, meaning that the NV diverges from Jerome's translation. Zuiddam has called the NV "an imaginary text of Scripture on the authority of scholarship, based on a handful of manuscripts that run contrary to the textual traditions of both the Eastern and the Western Church". [23] 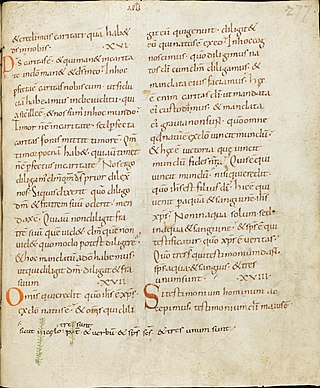 The Vulgate is a late-4th-century Latin translation of the Bible.

The Codex Vaticanus, designated by siglum B or 03, δ 1, is a fourth-century Christian manuscript of a Greek Bible, containing the majority of the Greek Old Testament and the majority of the Greek New Testament. It is one of the four great uncial codices. Along with Codex Alexandrinus and Codex Sinaiticus, it is one of the earliest and most complete manuscripts of the Bible. The codex has been dated palaeographically to the 4th century.

Ecclesiastical Latin, also called Church Latin or Liturgical Latin, is a form of Latin developed to discuss Christian thought in Late Antiquity and used in Christian liturgy, theology, and church administration down to the present day, especially in the Catholic Church. It includes words from Vulgar Latin and Classical Latin re-purposed with Christian meaning. It is less stylized and rigid in form than Classical Latin, sharing vocabulary, forms, and syntax, while at the same time incorporating informal elements which had always been with the language but which were excluded by the literary authors of Classical Latin. 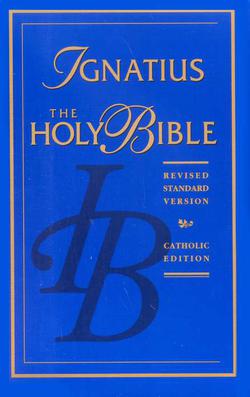 The Revised Standard Version Catholic Edition (RSVCE) is an English translation of the Bible first published in 1966. In 1965, the Catholic Biblical Association adapted, under the editorship of Bernard Orchard OSB and Reginald C. Fuller, the Revised Standard Version (RSV) for Catholic use. It contains the deuterocanonical books of the Old Testament placed in the traditional order of the Vulgate. The editors' stated aim for the RSV Catholic Edition was "to make the minimum number of alterations, and to change only what seemed absolutely necessary in the light of Catholic tradition." 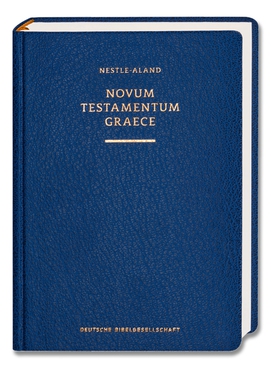 Novum Testamentum Graece is a critical edition of the New Testament in its original Koine Greek, forming the basis of most modern Bible translations and biblical criticism. It is also known as the Nestle–Aland edition after its most influential editors, Eberhard Nestle and Kurt Aland. The text, edited by the Institute for New Testament Textual Research, is currently in its 28th edition, abbreviated NA28.

The Codex Fuldensis, also known as the Victor Codex, designated by F, is a New Testament manuscript based on the Latin Vulgate made between 541 and 546. The codex is considered the second most important witness to the Vulgate text; and is also the oldest complete manuscript witness to the order of the Diatessaron. It is an important witness in any discussion about the authenticity of 1 Corinthians 14:34-35 and the Comma Johanneum. It is one of the earliest dated manuscripts of the New Testament. It was corrected until 2 May, 546 AD. 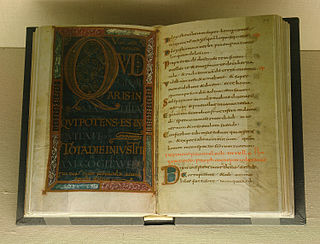 The Latin Psalters are the translations of the Book of Psalms into the Latin language. They are the premier liturgical resource used in the Liturgy of the Hours of the Latin Rites of the Roman Catholic Church.

Editio Critica Maior (ECM) is a critical edition of the Greek New Testament being produced by the Institut für neutestamentliche Textforschung —which is famous, for example, for the Novum Testamentum Graece —in collaboration with other international institutes. 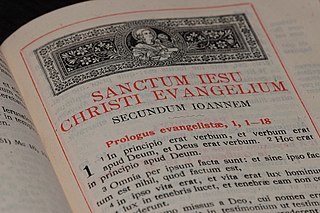 The term Catholic Bible often refers to a Christian Bible that includes the whole 73-book canon recognized by the Catholic Church, including some of the deuterocanonical books : those of the Old Testament which are in the Greek Septuagint collection but not in the Hebrew Masoretic Text collection. The term may also refer to a version of the Bible which has been approved for publication in accordance with Catholic Canon Law.

The Institute for New Testament Textual Research at the University of Münster, Westphalia, Germany, is to research the textual history of the New Testament and to reconstruct its Greek initial text on the basis of the entire manuscript tradition, the early translations and patristic citations; furthermore the preparation of an Editio Critica Maior based on the entire tradition of the New Testament in Greek manuscripts, early versions and New Testament quotations in ancient Christian literature. Under Kurt Aland's supervision, the INTF collected almost the entire material that was needed. The manuscript count in 1950 was 4250, in 1983, 5460, and in 2017 approximately 5800 manuscripts.

Liturgiam authenticam is an instruction of the Congregation for Divine Worship and the Discipline of the Sacraments, dated 28 March 2001.

Barbara Aland, née Ehlers is a German theologian and was a Professor of New Testament Research and Church History at Westphalian Wilhelms-University of Münster until 2002. 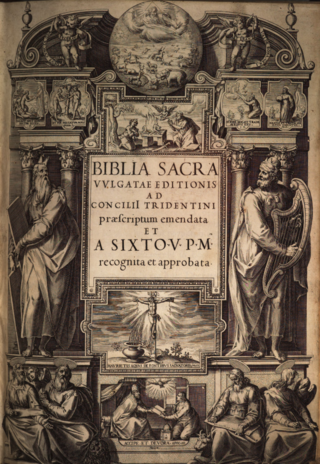 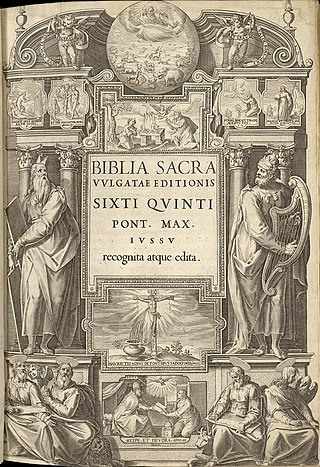 The New American Bible Revised Edition (NABRE) is an English-language Catholic translation of the Bible, the first major update in 20 years to the New American Bible (NAB), which was translated by members of the Catholic Biblical Association and originally published in 1970. Released on March 9, 2011, the NABRE consists of the 1986 revision of the NAB New Testament with a fully revised Old Testament approved by the United States Conference of Catholic Bishops in 2010.

The Bible translations into Latin date back to classical antiquity.

The Benedictine Vulgate, Vatican Vulgate or Roman Vulgate is a critical edition of the Vulgate version of the Old Testament, Catholic deuterocanonical books included. The edition was supported by and begun at the instigation of the Catholic Church, and was done by the Benedictine monks of the pontifical Abbey of St Jerome-in-the-City. The edition was published progressively from 1926 to 1995, in 18 volumes. 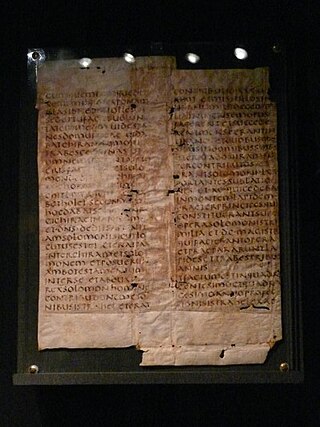 Vetus Latinamanuscripts are handwritten copies of the earliest Latin translations of the Bible, known as the "Vetus Latina" or "Old Latin". They originated from multiple translators, and differ from Vulgate manuscripts which follow the late-4th-century Latin translation by Jerome that would eventually become the basis of the official Bible of the Catholic Church as the Sixto-Clementine Vulgate in 1592.