This is the official list of titular sees of the Catholic Church included in the Annuario Pontificio . [1] Archiepiscopal sees are shown in bold.

The Italian-language Annuario Pontificio devotes some 200 pages to listing these sees, with up to a dozen names on each page. It gives their names in Latin (which are generally the names used also in English) as well as in Italian, and indicates the ancient Roman province to which most of them belonged or other geographical particulars, their status as metropolitan see or suffragan see (of episcopal or archiepiscopal rank), and basic biographical information about their current bishops. [2]

Numidia was the ancient kingdom of the Numidians located in what is now Algeria and a smaller part of Tunisia and small part of Libya in the Maghreb. The polity was originally divided between Massylii in the east and Masaesyli in the west. During the Second Punic War, Masinissa, king of the Massylii, defeated Syphax of the Masaesyli to unify Numidia into one kingdom. The kingdom began as a sovereign state and later alternated between being a Roman province and a Roman client state.

The Laterculus Veronensis or Verona List is a list of Roman provinces from the times of the Roman emperors Diocletian and Constantine I. The list is transmitted only in a 7th-century manuscript, which is preserved in the Chapter House Library in Verona. The most recent critical edition is that of Timothy Barnes (1982). Earlier editions include that by Theodor Mommsen (1862), that by Otto Seeck in his edition of the Notitia dignitatum (1876), and by Alexander Riese in the Geographi Latini minores (1878).

Consularis is a Latin adjective indicating something pertaining to the consular office. In Ancient Rome it was a title given to those senators who held consular rank, i.e. who had served as consuls or who had received the rank as a special honour. In Late Antiquity, the title became also a gubernatorial rank for provincial governors.

Caesarea, a city name derived from the first Roman imperial family, which later became a title "Caesar", was given to numerous cities and locations in the Roman Empire proper and/or Byzantine Empire :

The Diocese of Africa was a diocese of the later Roman Empire, incorporating the provinces of North Africa, except Mauretania Tingitana. Its seat was at Carthage, and it was subordinate to the Praetorian prefecture of Italy.

Mammilla was an ancient city and bishopric in Algeria. It is now a Latin Catholic titular see.

Aquae Novae in Proconsulari is a former Ancient city and bishopric in Roman Africa and present Latin Catholic titular see.

Aquae in Proconsulari is a former Ancient city and bishopric in Roman Africa and present Latin Catholic titular see. 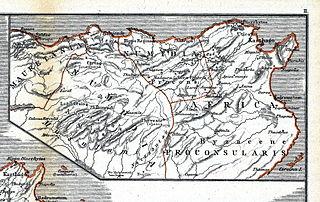