Last updated April 02, 2021
Assembly of bishops of some nation or certain territory of the Latin Church

An episcopal conference, sometimes called a conference of bishops, is an official assembly of the bishops of the Catholic Church in a given territory. Episcopal conferences have long existed as informal entities. The first assembly of bishops to meet regularly, with its own legal structure and ecclesial leadership function, is the Swiss Bishops' Conference, which was founded in 1863. [1] More than forty episcopal conferences existed before the Second Vatican Council. [2] Their status was confirmed by the Second Vatican Council [3] and further defined by Pope Paul VI's 1966 motu proprio , Ecclesiae sanctae . [4] [5]

The operation, authority, and responsibilities of episcopal conferences are currently governed by the 1983 Code of Canon Law (see especially canons 447–459) [7] [8] In addition, there are assemblies of bishops which include the bishops of different rites in a nation, both Eastern Catholic and Latin Catholic; these are described in canon 322 §2 of the Code of Canons of the Eastern Churches.

The nature of episcopal conferences, and their magisterial authority in particular, was subsequently clarified by Pope John Paul II in his 1998 motu proprio , Apostolos suos, which stated that the declarations of such conferences "constitute authentic magisterium" when approved unanimously by the conference; otherwise the conference must achieve a two-thirds majority and seek the recognitio, that is, recognition of approval, of the Holy See, which they will not receive if the majority "is not substantial". [9]

In the 2013 apostolic exhortation, Evangelii Gaudium , Pope Francis expressed his concern that the intent of the Second Vatican Council, which would give episcopal conferences "genuine doctrinal authority, has not yet been sufficiently elaborated." [10] On September 9, 2017, Pope Francis modified canon law, granting episcopal conferences specific authority "to faithfully prepare … approve and publish the liturgical books for the regions for which they are responsible after the confirmation of the Apostolic See." The Congregation for Divine Worship and the Discipline of the Sacraments, which formerly had primary responsibility for translations, was ordered to "help the Episcopal Conferences to fulfil their task." [11] [12] On October 22, 2017, the Holy See released a letter that Pope Francis had sent to the Prefect of the Congregation for Divine Worship and the Discipline of the Sacraments, Cardinal Robert Sarah, clarifying that the Holy See and its departments would have only limited authority to confirm liturgical translations recognized by a local episcopal conference. [13] In late February, 2018, the Council of Cardinals and Pope Francis undertook a consideration of the theological status of episcopal conferences, re-reading Pope John Paul II's Apostolos Suos in the light of Pope Francis's Evangelii Gaudium. [14]

In addition to the episcopal conferences as defined by the Holy See, there are a number of other regional groupings of bishops: [15] :1101–06

Synods of Bishops of the Patriarchal and Major Archiepiscopal Churches

In the Roman Catholic Church, a plenary council is any of various kinds of ecclesiastical synods, used when those summoned represent the whole number of bishops of some given territory. The word itself, derived from the Latin plenarium, hence concilium plenarium, also concilium plenum. Plenary councils have a legislative function that does not apply to other national synods.

The Deposit of Faith is the body of revealed truth in the Scriptures and Tradition proposed by the Roman Catholic Church for the belief of the faithful. The phrase has a similar use in the US Episcopal Church. 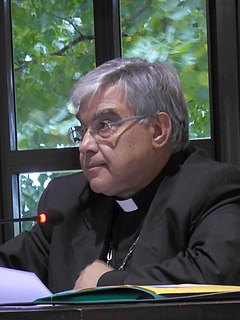 Marcello Semeraro is an Italian prelate of the Catholic Church who has been the Prefect of the Congregation for the Causes of Saints since October 2020. He was previously Bishop of Albano and secretary to the group of cardinals named by Pope Francis to advise him.

Evangelii gaudium is a 2013 apostolic exhortation by Pope Francis. In its opening paragraph, Pope Francis urged the entire Church "to embark on a new chapter of evangelism". According to the exhortation, the Church must understand itself as a "community of missionary disciples", who are "permanently in a state of mission".