Dimissorial letters (in Latin, litterae dimissoriae) are testimonial letters given by a bishop or by a competent religious superior to his subjects in order that they may be ordained by another bishop. Such letters testify that the subject has all the qualities demanded by canon law for the reception of the order in question, and request the bishop to whom they are addressed to ordain him. [1]

The plural term is often used of a single document because of the influence of the Latin term, since in that language litterae, which literally means letters (of the alphabet) can also mean a letter (in the sense of message).

Before the entry into force of the Code of Canon Law in 1917, the term had a wider sense (see the article in the Catholic Encyclopedia of that period). The conditions for issuing dimissorial letters were also different and were more complicated.

For ordination to diaconate or priesthood of a member of a religious institute, the major superior of the institute gives the letters, if the person to be ordained is a permanently professed member of the institute; all other members must obtain their dimissorial letters in the same way as the secular clergy do.. [4] In a mixed congregation of men (both priests and brothers) only a priest can be elected to be the major superior (superior general) and only a cleric that is superior general can issue a dimissorial letter.

The person who has authority to issue dimissorial letters is obliged to make sure that the testimonials and documents required by canon law have first been obtained. [5]

In addition, a testimonial is required from the rector of the candidate's seminary or house of formation concerning his sound doctrine, genuine piety, good moral behaviour, fitness for the exercise of ministry and his physical and psychological health. [7]

Incardination is the formal term in the Catholic Church for a clergyman being under a bishop or other ecclesiastical superior. It is also sometimes used to refer to laity who may transfer to another part of the church, from say the Western Latin Church to an Eastern Catholic Church or from a territorial diocese to one of the three personal ordinariates for former Anglicans. 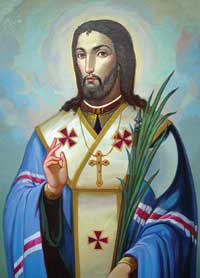 The Priestly Society of Saint Josaphat Kuntsevych (SSJK) is a society of traditionalist priests and seminarians originating from the Ukrainian Greek Catholic Church which is led by the excommunicated priest Basil Kovpak. It is based in Riasne, Lviv, Western Ukraine. In Lviv, the society maintains a seminary, at which currently thirty students reside, and takes care of a small convent of Basilian sisters. The SSJK is affiliated with the Society of St. Pius X and Holy Orders are conferred by the latter society's bishops in the Roman Rite. The SSJK clergymen, however, exclusively follow a version of Slavonic Byzantine Rite in the Ruthenian recension.

In the liturgical traditions the Catholic Church the term ordination refers to the means by which a person is included in one of the orders of bishops, priests or deacons. The teaching of the Catholic Church on ordination, as expressed in the Code of Canon Law, the Catechism of the Catholic Church, and the apostolic letter Ordinatio sacerdotalis, is that only a Catholic male validly receives ordination, and "that the Church has no authority whatsoever to confer priestly ordination on women and that this judgment is to be definitively held by all the Church's faithful." As with priests and bishops, the church ordains only men as deacons. The church cannot ordain anyone who has undergone sex reassignment surgery, and may sanction or require therapy for priests who are transsexual, regarding these to be an indicator of mental instability.

The Study Commission on the Women's Diaconate was established in August 2016 by Pope Francis to review the theology and history of the office of deacon in the Roman Catholic Church and the question of whether women might be allowed to become deacons.