Formal act of defection from the Catholic Church

In 2009, after Omnium in mentem, all mention of a formal act of defection from the Catholic Church and of any juridical effects deriving from it was removed from the Code. [5]

Between 1983 and 2006, the Catholic Church in Germany and some other countries treated as a formal act of defection from the Catholic Church the declaration that some made to the civil authorities for the purpose of avoiding the extra tax traditionally collected by the state for the benefit of whatever Church the tax-payer was a member of. The Church in those countries considered people who made this declaration as no longer entitled to the privileges of membership of the Church, such as having a wedding in church.

The 2006 notification [6] ruled that such declarations did not necessarily indicate a decision to abandon the Church in reality. It laid down that only the competent bishop or parish priest was to judge whether the person genuinely intended to leave the Church through an act of apostasy, heresy, or schism. It also pointed out that single acts of apostasy, heresy or schism (which can be repented) do not necessarily involve also a decision to leave the Church, and so "do not in themselves constitute a formal act of defection if they are not externally concretized and manifested to the ecclesiastical authority in the required manner."

The notification required therefore that the decision to leave the Church had to be manifested personally, consciously and freely, and in writing, to the competent Church authority, who was then to judge whether it was genuinely a case of "true separation from the constitutive elements of the life of the Church ... (by) an act of apostasy, heresy or schism."

If the bishop or parish priest decided that the individual had indeed made a formal act of defection from the Catholic Church – making a decision on this matter would normally require a meeting with the person involved – the fact of this formal act was to be noted in the register of the person's baptism. This annotation, like other annotations in the baptismal register, such as those of marriage or ordination, was unrelated to the fact of the baptism: it was not a debaptism (a term sometimes used journalistically): the fact of having been baptized remained a fact, and the Catholic Church holds that baptism marks a person with a seal or character that "is an ontological and permanent bond which is not lost by reason of any act or fact of defection".

The motu proprio Omnium in mentem of 26 October 2009 removed from the canons in question all reference to an act of formal defection from the Catholic Church. [5] [7] [8] Accordingly, "it is no longer appropriate to enter attempts at formal defection in the sacramental records since this juridic action is now abolished." [9]

In late August 2010, the Holy See confirmed that it was no longer possible to defect formally from the Catholic Church. [10] However, the Roman Catholic Archdiocese of Dublin declared on 12 October 2010 that it intended to keep a register of those who expressed the wish to defect. [10] [11] Since this fell short of making an annotation in the baptismal register, CountMeOut (an association in the archdiocese that had been promoting formal defections from the Catholic Church) thereupon ceased to provide defection forms. [12]

Although the act of "formal defection" from the Catholic Church has thus been abolished, public or "notorious" (in the canonical sense) [13] defection from the Catholic faith or from the communion of the Church is of course possible, as is expressly recognized in the Code of Canon Law. [14] Even defection that is not known publicly is subject to the automatic spiritual penalty of excommunication laid down in canon 1364 of the Code of Canon Law. However, when determining if a marriage is lawfully celebrated, Catholic baptism is now the sole determinant of public membership in the Catholic Church. [5]

CountMeOut.ie was a website in Ireland, the main purpose of which was to encourage and direct Irish people to leave the Catholic Church. It was started by friends Cormac Flynn, Paul Dunbar and Gráinne O'Sullivan, after researching the process of how to leave the Catholic Church. They discovered that reforms by Pope John Paul II in the second Vatican council formalised the process of leaving. An official declaration of defection document had been produced by the Vatican since 2006 because of the 1% tax in Germany levied by the German Government for the benefit of Churches. The website created a PDF of this form through a three-step process, allowing users to print and send the documentation to the diocese where they were baptised. It gained some media coverage, particularly after the Ryan Report about abuse cases by some clerics in Irish Industrial schools. Awards.ie declared for it a Realex Payments Web Award in 2009.

Omnium in mentem is the incipit of a motu proprio of 26 October 2009, published on 15 December of the same year, by which Pope Benedict XVI modified five canons of the 1983 Code of Canon Law, two concerning the sacrament of holy orders, the other three being related to the sacrament of marriage. 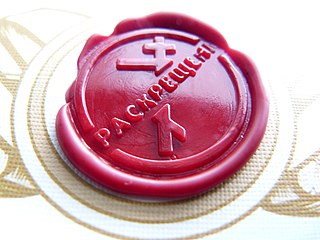 Most Christian churches see baptism as a once-in-a-lifetime event that can be neither repeated nor undone. They hold that those who have been baptized remain baptized, even if they renounce the Christian faith by adopting a non-Christian religion or by rejecting religion entirely. But some other organizations and individuals are practicing debaptism.

Spiritus Domini is an apostolic letter in the form of a motu proprio by Pope Francis signed on 10 January 2021 and released the next day. It changed the Code of Canon Law to allow women to be admitted to the instituted ministries of acolyte and lector (reader), which had until then been exclusively available to men.