Dignitas connubii is an instruction issued by the Pontifical Council for Legislative Texts on 25 January 2005 on the discipline to be observed in diocesan and interdiocesan tribunals regarding causes of the nullity of marriage. [1] It was compiled in close concert with dicasteries that have a related competence, namely, the Congregation for the Doctrine of the Faith, the Congregation for Divine Worship and the Discipline of the Sacraments, the Supreme Tribunal of the Apostolic Signatura, and the Tribunal of the Roman Rota. [2] It was partially obrogated by the matrimonial nullity trial reforms of Pope Francis in 2015, but remains in effect.

According to Cardinal Julián Herranz, then-president of the Pontifical Council for Legislative Texts which issued the instruction, the purpose of Dignitas connubii was to give the ministers of justice (tribunal officers) a practical and convenient guide for handling tribunal work in matrimonial nullity processes. [2] It was intended to serve the same purpose that a similar instruction, Provida Mater, had in 1936 [2] under the 1917 Code of Canon Law. 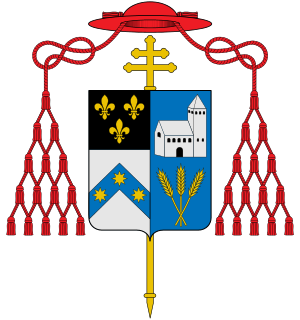 Juan Ignacio Arrieta Ochoa de Chinchetru has been secretary of the Pontifical Council for Legislative Texts since 15 February 2007.

The Council of Cardinals (C9), is a group of Catholic cardinals appointed by Pope Francis to serve as his advisers. Announced on 13 April 2013, one month after his election, it was formally established on 28 September of the same year. The Council currently has six members, following the decision by Pope Francis to remove three of its members in late 2018.

The matrimonial nullity trial reforms of Pope Francis are the reforms of Catholic canon law governing such trials, made public 8 September 2015. The reforms were effected by two separate apostolic letters from Pope Francis, the motu proprio Mitis iudex dominus Iesus amending the 1983 Code of Canon Law, and the motu proprio Mitis et misericors Iesus amending the Code of Canons of the Eastern Churches. This was in response to the Bishops who, during the Synod on the Family of 5-9 October 2014, called for simplification of the procedure whereby a legally invalid marriage is declared null.