These curias are historically descended from the Roman Curiae, and they keep that name even though they now have very different functions. When the Roman Empire collapsed, many of the administrative functions previously done by the state were subsumed by the only solid institution left, which was the church. The Bishop and curia took the place of the government officials, often to the point of sitting at the same chair in the same building. The Curia therefore passed into religious hands, and afterwards changed functions many times but always keeping its traditional name, at least in those Christian denominations that keep a strong continuity with the Apostolic tradition.

Every diocese and eparchy has a curia, consisting of the chief officials of the diocese. These officials assist the diocesan bishop in governing the particular church.

This diocesan curia includes the vicar general, who is normally also the moderator of the curia, any episcopal vicars, the chancellor of the curia, vice-chancellors and notaries, and a finance officer and financial council. The bishop may also add other officials of his choice. [1]

The administrative unit of the Holy See is called the Roman Curia, which assists the Pope in governing the Catholic Church. [4] The Roman Curia includes the Secretariats, the Curial Congregations, the Pontifical Councils, Pontifical Commissions, the tribunals, and other offices.

In many Christian Denominations, an archbishop is a bishop of higher rank or office. In some cases, such as the Lutheran Church of Sweden and the Church of England, the title is borne by the leader of the denomination. In others, such as the Roman Catholic Church, there are many archbishops who either have jurisdiction over an ecclesiastical province in addition to their own Archdiocese, or are otherwise granted a titular archbishopric.

Robert Francis Vasa is an American prelate of the Roman Catholic Church. On Monday, January 24, 2011, Bishop Vasa, 59, was named the Coadjutor Bishop, to Bishop Daniel F. Walsh of the Roman Catholic Diocese of Santa Rosa in California, by Pope Benedict XVI. Until then, he had been the fifth Bishop of Baker, in Oregon.

David Dennis Kagan is an American prelate of the Roman Catholic Church. He is the seventh and current bishop of Bismarck.

James Francis Checchio is an American Roman Catholic prelate. Bishop Checchio served as rector of the Pontifical North American College in Rome from 2005 until 2016. On March 8, 2016, Pope Francis named him Bishop of the Diocese of Metuchen to succeed Bishop Paul Bootkoski. He was consecrated and installed as Bishop of Metuchen on May 3, 2016. 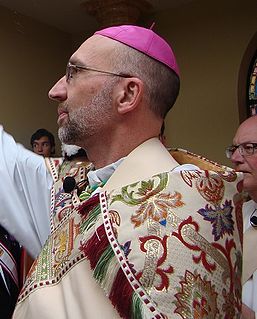 John Francis Doerfler is an American prelate of the Roman Catholic Church who serves as bishop of the Diocese of Marquette, Michigan.