A pontifical council is a mid-sized department or dicastery of the Roman Curia, the central organization responsible for assisting the pope in the governance and oversight of Catholic Church. Such a council has a cardinal or archbishop as its president and is restricted in its activities in comparison with the larger parts of the Curia. [1]

The active pontifical councils are: [2] 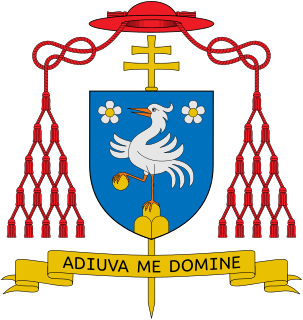 The Council of Cardinals (C9), is a group of Catholic cardinals appointed by Pope Francis to serve as his advisers. Announced on 13 April 2013, one month after his election, it was formally established on 28 September of the same year. The Council currently has six members, following the decision by Pope Francis to remove three of its members in late 2018.

The Dicastery for Communication is a division (dicastery) of the Roman Curia with authority over all communication offices of the Holy See and the Vatican City State, Its various offices can be accessed through its website. These are the Pope's website and other offices such as Vatican News on internet, the Holy See Press Office, L'Osservatore Romano, Photograph Service, Vatican Radio, Vatican Press, and the Vatican Publishing House. The Pontifical Council for Social Communications has been subsumed into this new Dicastery.

The Vatican announced the creation of the Dicastery for Promoting Integral Human Development on 31 August 2016 and it became effective 1 January 2017. Cardinal Peter K. A. Turkson was named its first prefect. The Prefect is to be assisted by a Secretary and at least one Undersecretary.