The Pontifical Council for Social Communications (Latin : Pontificium Consilium de Communicationibus Socialibus) was a dicastery of the Roman Curia that was suppressed in March 2016 and merged into the Secretariat for Communications. [4]

According to Pastor bonus , Pope John Paul II's 1988 apostolic constitution on the Roman Curia, the council was "involved in questions regarding the means of social communication, so that, also by these means, human progress and the message of salvation may benefit secular culture and mores." [5] It worked "to encourage and support" the Church and its members in social communication to imbue mass media "with a human and Christian spirit." [5] (n. 170)

First established by Pope Pius XII in 1948 and later given wider jurisdiction and new names by successive popes, most recently by John Paul II on 28 June 1988, it was responsible for using mass media to spread the Gospel. [1] [3]

The PCSC and its predecessor bodies have published a number of statements on various topics connected with social communications, including:

In addition, the PCSC helped to draft John Paul II's 2005 apostolic letter The Rapid Development , on technological changes in the media.

Il rapido sviluppo is an apostolic letter signed by Pope John Paul II on 24 January 2005; it mainly addresses those who are involved in communications.

The Pontifical Council for Dialogue with Non-Believers was a dicastery of the Roman Curia charged with promoting dialogue between the Catholic Church and non-believers. 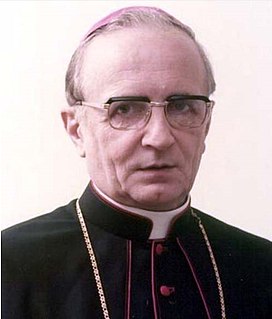 Romeo Panciroli was an Italian prelate of the Catholic Church who worked in communications until 1984 and then in the diplomatic service of the Holy See.

Cristiane Murray is a Brazilian radio journalist who serves as the Vice Director of the Holy See Press Office. She worked for Vatican Radio, within the Dicastery for Communication, providing commentary on papal events and international trips as well as managing and producing content in Portuguese for Vatican News' social media platforms. She was appointed by Pope Francis as Vice Director of the Holy See Press Office in 2019, becoming the second woman, after Paloma García Ovejero, and the first Latin American woman to serve in this capacity. The appointment has made her one of the most prominent women in Vatican leadership.