The Dicastery for Promoting Integral Human Development (Dicasterium ad integram humanam progressionem fovendam in Latin) is a dicastery of the Roman curia.

Vatican announced the creation of the dicastery on 31 August 2016 and it became effective 1 January 2017. Cardinal Peter K. A. Turkson was named its first prefect. The Prefect is to be assisted by a Secretary and at least one Undersecretary.

This dicastery of the Roman Curia combined the work of four Pontifical Councils established following the Second Vatican Council: Justice and Peace, Pastoral Care of Migrants and Itinerant People, Pastoral Assistance to Health Care Workers, and Cor Unum. [1] Pope Francis has given it responsibility for "issues regarding migrants, those in need, the sick, the excluded and marginalized, the imprisoned and the unemployed, as well as victims of armed conflict, natural disasters, and all forms of slavery and torture". [2]

The Pope announced that "temporarily" he would personally direct the special Migrants and Refugees Section which is part of the Dicastery. [4] He named the Canadian Jesuit Michael Czerny (later cardinal) and the Italian Scalabrinian Fabio Baggio to serve as undersecretaries for issues related to refugees and migrants. [5]

On 20 March 2020, Pope Francis asked the Dicastery for Promoting Integral Human Development (DPIHD) to create a Vatican COVID-19 Commission to express the Church's solicitude facing the COVID-19 pandemic, and propose responses to the potential socio-economic challenges deriving from it. [6] [7]

From the Statutes of the Dicastery for Promoting Integral Human Development: [8]

The Dicastery promotes integral human development in the light of the Gospel and in the tradition of the Church’s social teachings. To this end, it maintains relations with the Conferences of Bishops, offering them its cooperation so that values related to justice and peace as well as the care of creation may be promoted.

In fulfilling its mission, it may establish relationships with associations, institutes and non-governmental organizations, including those outside the Catholic Church, who are committed to promoting justice and peace. It may also enter into discussion with representatives of civil governments and other international public institutions, in order to promote study, deepen knowledge, and public awareness regarding matters within its competence, while respecting the competencies of other offices of the Roman Curia.

The Dicastery for Promoting Integral Human Development is committed to fostering among peoples: sensitivity for peace, commitment to justice and solidarity with those who are most vulnerable such as migrants and refugees, particularly through the celebrations of the World Day of Peace, the World Day of Migrants, the World Day of the Sick. Its activities include also the presentation of the annual Lenten Message of the Pope. 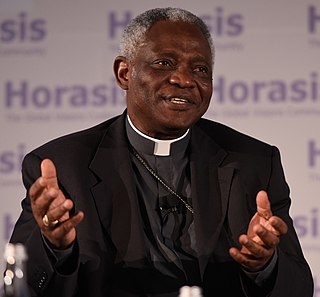 Peter Kodwo Appiah Turkson is a Ghanaian cardinal of the Catholic Church. He was president of the Pontifical Council for Justice and Peace from 24 October 2009 to 1 January 2017. Pope Francis named him the first Prefect of the Dicastery for the Promotion of Integral Human Development, which began operations on 1 January 2017, and a post he continues to hold at present. The Dicastery was the consolidation of several areas under one administration including, environment, ecology, ethics, dignity of all people, poverty, and economics, whose current implementation Pope Francis sees as destructive on many fronts.

The Migrants and Refugees Section is a section on migrants and refugees included in the Vatican Dicastery for Promoting Integral Human Development (IHD).

Michael F. Czerny is a Czechoslovakian-born Canadian cardinal of the Catholic Church. He serves as Under-secretary of the Migrants and Refugees Section of the Holy See's Dicastery for Promoting Integral Human Development since 2017. A member of the Jesuits, Czerny has worked to promote social justice in Canada, Latin America, Africa, and Rome. Pope Francis created him a cardinal in 2019.

Fabio Baggio is an Italian priest of the Scalabrinian Missionaries, a collaborator of Pope Francis and one of the Vatican officials in charge of migrations. He defends the opening of legal doors for migrants and refugees.

Fratelli tutti is the third encyclical of Pope Francis, subtitled "on fraternity and social friendship". In the document, Francis states that the way the COVID-19 pandemic was managed by world countries has shown a failure in global cooperation. The encyclical calls for more human fraternity and solidarity, and is a plea to reject wars.

The Vatican COVID-19 Commission is an institution created by Pope Francis to express the Church’s solicitude facing the COVID-19 pandemic, and propose responses to the potential socio-economic challenges deriving from it. On 20 March 2020, Pope Francis asked the Dicastery for Promoting Integral Human Development (DPIHD) to create a Commission to "prepare the future" through actions of support to local churches to save human lives and help the poorest, and through the analysis and reflection on the socioeconomic challenges that have risen with this crisis and the proposal of criteria to face them.