The Roman Rota, formally the Apostolic Tribunal of the Roman Rota (Latin : Tribunal Apostolicum Rotae Romanae), and anciently the Apostolic Court of Audience, is the highest appellate tribunal of the Catholic Church, with respect to both Latin-rite members [1] and the Eastern-rite members [2] and is the highest ecclesiastical court constituted by the Holy See related to judicial trials conducted in the Catholic Church. [3] An appeal may be had to the pope himself, who is the supreme ecclesiastical judge. [4] The Catholic Church has a complete legal system, which is the oldest in the West still in use. The court is named Rota (wheel) because the judges, called auditors , originally met in a round room to hear cases. [5] The Rota was established in the 13th century.[ citation needed ]

The pope appoints the auditors of the Rota and designates one of them the dean. [6] On Saturday, September 22, 2012, Pope Benedict XVI accepted the resignation as dean, for reasons of age, of Bishop Antoni Stankiewicz, and appointed in his place Msgr. Pio Vito Pinto, until then serving as a prelate auditor of the Court of First Instance. [7] The Rota issues its decrees and sentences in Latin. [8] The Rota adjudicates cases in a panel (called a turnus) of three auditors, or more, depending on the complexity of the matter, assigned by the dean of the tribunal, though sometimes a larger number of auditors are assigned to a particular case. [9] The auditors of the Rota are selected from among recognized ecclesiastical judges serving various dioceses around the world.

The Rota's official records begin in 1171. [10] Until the Risorgimento and the loss of the Papal States in 1870, the Rota was a civil tribunal and its judgements had the status of law in the Papal States. [11]

In March 2020, Pope Francis issued a new Vatican law which provides for greater independence of judicial bodies and magistrates dependent on the Pope. [12] It also specifies the requirements for the appointment of judges and it simplifies the judicial system while increasing the staff of the court. [12]

Until the 14th century the court was formally known as the Apostolic Court of Audience. The first recorded use of the term Rota, which referred to the wheel-shaped arrangement of the benches used by the court in the great hall at Avignon, is in Thomas Fastolf's Decisiones rotae, consisting of reports on thirty-six cases heard at the Court of Audience in Avignon between December 1336 and February 1337. [13] Its first usage in a papal bull is in 1418. [14] It is also possible that the term Rota comes from the porphyry wheel that was centered in the marble floor of Avignon, or even from the wheel-like cases in which parchment roll records were kept. [15]

The Rota's main function is that of an appellate tribunal, ordinarily reviewing decisions of lower courts if the initial court (first instance) and the first appellate court (second instance) do not agree on the outcome of a case; [16] however, any party to an initial decision before a court of the Latin Church (and also some Eastern Churches) has the right to file a second-instance appeal directly to the Rota. [17] Dominating its caseload are petitions seeking the issuance of a decree of nullity of a marriage, although it has jurisdiction to hear any other type of judicial and non-administrative case in any area of canon law. The Rota serves as a tribunal of first instance (in Anglo-American common law what would be termed exclusive original jurisdiction) in certain cases such as any contentious case in which a Bishop of the Latin Church is a defendant. [18] If the case can still be appealed after a Rotal decision, the appeal goes to a different turnus, or panel, of the Rota. [19] The Rota is the highest appeals court for all judicial trials in the Catholic Church. A judgment of the Rota can, however with the greatest difficulty, be vacated by the Supreme Tribunal of the Apostolic Signatura, which is the highest administrative court in the Catholic Church. [20] However, the legal procedure or process used by the judges of the Rota, not the merits of the case, are on trial before the Signatura: the Signatura is only able to grant the petitioner a new trial to be held before a new turnus of the Rota, if the Rota was found to have erred in procedure ("de procedendo"). [21]

The Roman Rota proceedings are governed by a specific set of rules, the "Normae Romanae Rotae Tribunalis", promulgated in 1994 by Pope John Paul II. [22] Only advocates who are registered in a specific list are allowed to represent the parties before the Tribunal. [23]

Since Pope Benedict XVI issued the motu proprio Quaerit semper the Rota has had exclusive competence to dispense from marriages ratum sed non consummatum and is also competent to examine cases concerning the nullity of sacred ordination, in accordance with both universal and proper law. [24]

In recognition of the Tribunal's almost 800 years of history and signal reputation,[ neutrality is disputed ] the Prelate Auditors, by exception to numerous norms promulgated by both Popes Paul VI and John Paul II, are to be addressed with the traditional title "Most Illustrious and Most Reverend" ("Illustrissimus ac Reverendissimus. The dean of the Rota, even if not already consecrated a bishop, is to be addressed with the traditional title of "Your Excellency" ("Excellentia Tua"). All Prelate Auditor Judges of the Rota are styled, "Most Reverend Monsignor."

The active auditors of the Rota, with their dates of appointment by the pope, are: 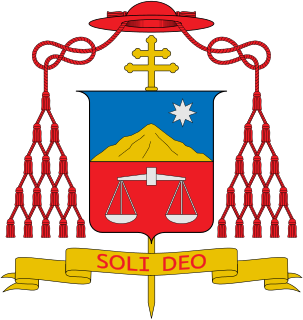 Aurelio Sabattani JUD was an Italian Cardinal of the Roman Catholic Church. He served as Prefect of the Apostolic Signatura from 1967 until his death and was elevated to the rank of cardinal in 1983.

The law of Vatican City State consists of many forms, the most important of which is the canon law of the Catholic Church. The organs of state are governe by the Fundamental Law of Vatican City State. The Code of Penal Procedure governs tribunals and the Lateran Treaty governs relations with the Italian Republic.

Giuseppe Sciacca is the current Secretary of the Supreme Tribunal of the Apostolic Signatura since his appointment by Pope Francis on July 16, 2016, replacing the retiring Archbishop Frans Daneels. Previously, he had served as Adjunct Secretary of the Apostolic Signatura, since Saturday, 24 August 2013. Previously, he had been serving as the Secretary General of the Governatorate of Vatican City State since his appointment by Benedict XVI on 3 September 2011.