Canon 1324 is a canon of the 1983 Code of Canon Law, according to which penalties prescribed in canon law must be diminished or replaced by a penance. The canon does not automatically remove the penalty completely except in cases of latae sententiae (automatic) excommunication. [1]

Cases to which the canon applies

The diminution or replacement of the penalty must be applied if the offence was committed by:

In the circumstances listed above latae sententiae (automatic) excommunications do not apply.

A judge may diminish or replace a prescribed penalty also in view of other circumstances that reduce the gravity of the offence.

Archbishop Marcel Lefebvre argued that his ordination of four bishops on 30 June 1988 (the Ecône consecrations) in contravention of a direct order from Pope John Paul II was "by reason of necessity or grave inconvenience" and was not an intrinsically evil act or one that tended to the harm of souls, and that therefore he was not subject to the penalty of excommunication. He claimed that his action was necessary because the traditional form of the Catholic faith and sacraments would become extinct without traditionalist clergy to pass them on to the next generation. He called the ordinations "opération survie" - "Operation Survival", citing in his defense canons 1323 and 1324 of the 1983 Code of Canon Law. [2]

Abortion on a minor in Brazil

In March 2009, after an abortion on a nine-year-old girl raped by her stepfather and pregnant with twins had been performed to save her life, Archbishop José Cardoso Sobrinho of Olinda and Recife stated that latae sententiae excommunication had been incurred by the girl's mother and the medical team. The National Conference of Bishops of Brazil disowned his statement, saying that, in accordance with canon law, the mother was certainly not excommunicated, since she had acted "out of grave fear" (cf. no. 5 of this canon) and there was insufficient evidence to show that any member of the medical team was acting with the full awareness and contumacy envisaged in this canon (cf. nos. 8 and 9). [3] [4] Bishop Jean-Michel di Falco of Gap, France also denied the applicability to the girl's mother of canon 1398 of the 1983 Code of Canon Law, which imposes automatic excommunication for procuring a completed abortion, pointing out that canon 1324 states that automatic censures, such as that which applies for such abortions, do not affect those who act out of grave fear. [5]

Ipso facto is a Latin phrase, directly translated as "by the fact itself", which means that a specific phenomenon is a direct consequence, a resultant effect, of the action in question, instead of being brought about by a previous action. It is a term of art used in philosophy, law, and science. A common English idiom with a similar meaning is "in and of itself". Compare also "by itself" and "per se". 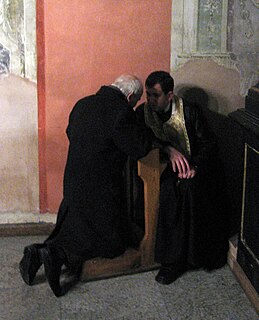 A mortal sin, in Catholic theology, is a gravely sinful act, which can lead to damnation if a person does not repent of the sin before death. A sin is considered to be "mortal" when its quality is such that it leads to a separation of that person from God's saving grace. The sin against the Holy Ghost and the sins that cry to Heaven for vengeance are considered especially serious. This type of sin should be distinguished from a venial sin that simply leads to a weakening of a person's relationship with God. Despite its gravity, a person can repent of having committed a mortal sin. Such repentance is the primary requisite for forgiveness and absolution. Teaching on absolution from serious sins has varied somewhat throughout history. The current Catholic teaching was formalized at the 16th century Council of Trent.

In Catholic canon law, an interdict is an ecclesiastical censure, or ban that prohibits persons, certain active Church individuals or groups from participating in certain rites, or that the rites and services of the church are banished from having validity in certain territories for a limited or extended time. 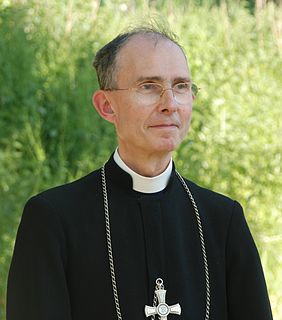 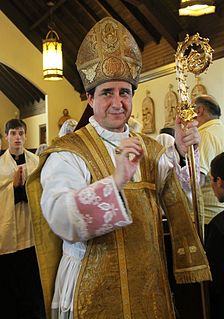 Married Priests Now! (MPN!) is an advocacy group founded and formerly led by Emmanuel Milingo, a former Roman Catholic bishop from Zambia. MPN is a liberal Catholic organization calling for relaxing the rules concerning marriage in the Latin Rite Catholic priesthood. Milingo has said that "There is no more important healing than the reconciliation of 150,000 married priests with the 'Mother Church', and the healing of a Church in crisis through renewing marriage and family."

A vitandus was someone affected by a rare and grave form of excommunication, in which the Church ordered, as a remedial measure, that the faithful were not to associate with him "except in the case of husband and wife, parents, children, servants, subjects", and in general unless there was some reasonable excusing cause.

The Catholic Church opposes all forms of abortion procedures whose direct purpose is to destroy a zygote, blastocyst, embryo or fetus, since it holds that "human life must be respected and protected absolutely from the moment of conception. From the first moment of his existence, a human being must be recognized as having the rights of a person – among which is the inviolable right of every innocent being to life." However, the Church does recognize as morally legitimate certain acts which indirectly result in the death of the fetus, as when the direct purpose is removal of a cancerous womb. Canon 1398 of the 1983 Code of Canon Law imposes automatic excommunication on Latin Catholics who procure a completed abortion, if they fulfill the conditions for being subject to such a sanction. Eastern Catholics are not subject to automatic excommunication, but by Canon 1450 of the Code of Canons of the Eastern Churches they are to be excommunicated by decree if found guilty of the same action, and they may be absolved of the sin only by the eparchial bishop. In addition to teaching that abortion is immoral, the Catholic Church also makes public statements and takes actions in opposition to its legality.

In 2009, a nine-year-old Brazilian girl became pregnant with twins; the girl's mother obtained an abortion for her, however Archbishop José Sobrinho excommunicated the girl's mother and the doctors who performed the abortion. This prompted an array of national and international criticism for the Archbishop's actions. In response, the National Conference of Bishops of Brazil declared that no one was excommunicated in the case, and in an article published on L'Osservatore Romano a Vatican bioethicist rebuked the archbishop for his public statement.

Decree on the Attempted Ordination of Some Catholic Women is a canonical decree issued by the Congregation for the Doctrine of the Faith, under Cardinal Joseph Ratzinger, and approved by Pope John Paul II on December 21, 2002. It can be found in Acta Apostolicae Sedis 95 (2003). The decree is in response to Romulo Antonio Braschi ordaining seven Catholic women to the priesthood of his movement, the Catholic Apostolic Charismatic Church of Jesus the King, on June 29, 2002, and is a follow up to a decree of excommunication of Braschi and the women issued on August 5, 2002.