Last updated May 01, 2021
Authoritative determination by the legislator concerning the application of practical principles

A determinatio is an authoritative determination by the legislator concerning the application of practical principles, that is not necessitated by deduction from natural [1] or divine law [2] but is based on the contingencies of practical judgement within the possibilities allowed by reason. [1] The concept derives from the legal philosophy of Thomas Aquinas, [3] and continues to be a part of discussions in natural law theory. [4]

In natural law jurisprudence, determinatio is the process of making natural law into positive law. [4]

In Catholic canon law, determinatio is the act by which natural law or divine positive law is made determinate in the canonical legal system as specific norms of law, [2] although the content of such law is still essentially that of divine law, which, together with canon law, forms "a single juridical system of law". [5]

Determinatio is a legal doctrine in the jurisprudence of the canon law of the Catholic Church. [2] It was imported from the legal philosophy of Thomas Aquinas. [6]

The general norms of divine or natural law serve as "shaping factors" and "a necessary basis" for the human-made canon law, but such general norms in themselves cannot have a greater legal effect until they are made into specific human laws, since the norms of divine law are "general and non-specific". [2]

But in the movement from the general to the concrete, there are sometimes many possibilities; that is, divine or natural law can be made concrete in many different ways, and all the legitimate alternatives are in line with the requirements of divine law. Wherefore the legislator must make a determinatio and "opt or choose among them". [2]

Jurisprudence, or legal theory, is the theoretical study of law. Scholars of jurisprudence seek to explain the nature of law in its most general form and provide a deeper understanding of legal reasoning, legal systems, legal institutions, and the role of law in society.

In the philosophy of law, virtue jurisprudence is the set of theories of law related to virtue ethics. By making the aretaic turn in legal theory, virtue jurisprudence focuses on the importance of character and human excellence or virtue to questions about the nature of law, the content of the law, and judging.

Analytical Thomism is a philosophical movement which promotes the interchange of ideas between the thought of Thomas Aquinas, and modern analytic philosophy.

Hans Kelsen was an Austrian jurist, legal philosopher and political philosopher. He was the author of the 1920 Austrian Constitution, which to a very large degree is still valid today. Due to the rise of totalitarianism in Austria, Kelsen left for Germany in 1930 but was forced to leave this university post after Hitler's seizure of power in 1933 because of his Jewish ancestry. That year he left for Geneva and later moved to the United States in 1940. In 1934, Roscoe Pound lauded Kelsen as "undoubtedly the leading jurist of the time". While in Vienna, Kelsen met Sigmund Freud and his circle, and wrote on the subject of social psychology and sociology.

Positive laws are human-made laws that oblige or specify an action. Positive law also describes the establishment of specific rights for an individual or group. Etymologically, the name derives from the verb to posit. 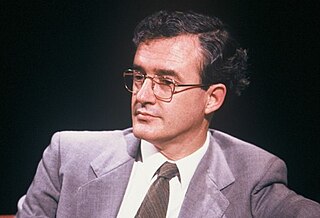 John Mitchell Finnis, is an Australian legal philosopher, jurist and scholar specializing in jurisprudence and the philosophy of law. He is currently the Biolchini Family Professor of Law at Notre Dame Law School and Permanent Senior Distinguished Research Fellow at the Notre Dame Center for Ethics and Culture. He was Professor of Law & Legal Philosophy at the University of Oxford from 1989 to 2010, where he is now professor emeritus. He acted as a constitutional adviser to successive Australian Commonwealth governments in constitutional matters and bilateral relations with the United Kingdom.

Germain Gabriel Grisez was a French-American philosopher. Grisez's development of ideas from Thomas Aquinas has redirected Catholic thought and changed the way it has engaged with secular moral philosophy. In 'The First Principle of Practical Reason: A Commentary on the Summa Theologiae, I-II, Q. 94, A. 2' (1965) Grisez attacked the neo-scholastic interpretation of Aquinas as holding that moral norms are derived from methodologically antecedent knowledge of human nature. Grisez defended the idea of metaphysical free choice, and proposed a natural law theory of practical reasoning and moral judgement which, although broadly Thomistic, departs from Aquinas on significant points.

Man-made law is law that is made by humans, usually considered in opposition to concepts like natural law or divine law.

Treatise on Law is Thomas Aquinas' major work of legal philosophy. It forms questions 90–108 of the Prima Secundæ of the Summa Theologiæ, Aquinas' masterwork of Scholastic philosophical theology. Along with Aristotelianism, it forms Aquinas' notion of law

A legal norm is a binding rule or principle, or norm, that organisations of sovereign power promulgate and enforce in order to regulate social relations. Legal norms determine the rights and duties of individuals who are the subjects of legal relations within the governing jurisdiction at a given point in time. Competent state authorities issue and publish basic aspects of legal norms through a collection of laws that individuals under that government must abide by, which is further guaranteed by state coercion. There are two categories of legal norms: normativity, which regulates the conduct of people, and generality, which is binding on an indefinite number of people and cases. Diplomatic and legislative immunity refers to instances where legal norms are constructed to be targeted towards a minority and are specifically only binding on them, such as soldiers and public officials.