The Summa contra Gentiles (also known as Liber de veritate catholicae fidei contra errores infidelium, "Book on the truth of the Catholic faith against the errors of the unbelievers") is one of the best-known treatises by St Thomas Aquinas, written as four books between 1259 and 1265.

It was probably written to aid missionaries in explaining the Christian religion to and defending it against dissenting points of doctrine in Islam and Judaism. To this end, Aquinas could rely on a substantial body of shared doctrine, especially tenets of monotheism, in the case of Judaism the shared acceptance of the Old Testament as scripture and in the case of Islam the (at the time) shared tradition of Aristotelian philosophy. [1]

Whereas the Summa Theologiæ was written to explain the Christian faith to theology students, the Summa contra Gentiles is more apologetic in tone, as it was written to explain and defend the Christian doctrine against unbelievers, with arguments adapted to fit the intended circumstances of its use, each article refuting a certain heretical belief or proposition. Instead of a mere elucidation of the length and breadth of Christian doctrine, Aquinas explains specific core articles of Christian belief. [1]

The conventional title Summa contra Gentiles, found in some of the earliest manuscripts, is sometimes given in the variant Summa contra Gentes. [2] The title is taken from chapter I.2, where Thomas states his intention as the work's author:

I have set myself the task of making known, as far as my limited powers will allow, the truth that the Catholic faith professes, and of setting aside the errors that are opposed to it. To use the words of Hilary: 'I am aware that I owe this to God as the chief duty of my life, that my every word and sense may speak of Him' (De Trinitate I, 37). [3]

A longer title is also given as Tractatus de fide catholica, contra Gentiles (or: contra errores infidelium), meaning "Tractate on the universal faith, against the pagans" (or, against the errors of the unbelievers). This is often shortened to De fide Catolica .

In the spring of 1256 Thomas was appointed regent master in theology at Paris and one of his first works upon assuming this office was Contra impugnantes Dei cultum et religionem, defending the mendicant orders, which had come under attack by William of Saint-Amour. [4] During his tenure from 1256 to 1259, Thomas wrote numerous works, and he was working on Summa contra Gentiles by the time he left Paris. [5] From Aquinas's autograph, Torrell (1996) identified the first 53 chapters of Book I as having been written in Paris based on studies of the parchment and the ink used. [6]

According to a tradition that can be traced to shortly after Thomas's death, the Summa contra Gentiles was written in response to a request, made in 1259, for a book that would help the Dominican missionaries in Spain to convert the Muslims and Jews there. The request was made by Raymond of Peñafort, a Dominican friar and advisor to James I of Aragon. [7] Raymond had been active in the Christian defense against the Moors (Muslims) and Jews in the kingdom of Aragon since the 1240s. To this end, Raymond instituted the teaching of Arabic and Hebrew in several houses of the friars, and he also founded priories in Murcia (then still under Muslim rule) and in Tunis. Additionally he went to help establish the Church in the recently conquered island of Mallorca. Raymond's request to Thomas was transmitted by fellow Dominican Ramón Martí, one of eight friars appointed to make a study of oriental languages with the purpose of carrying on a mission to Jews and Moors. [8] The historicity of this account has been questioned in modern scholarship. [9] Arguments adduced include the lack of an explicit dedication to Raymond, the evidence that substantial portions of book 1 were complete by mid-1259 (suggesting that Thomas started work on the book as early as 1257), and the suggestion that the work makes no effort to address tenets of Islam specifically. [10]

Later in 1259, Thomas left Paris and returned to Naples, where he was appointed as general preacher by the provincial chapter of 29 September 1260. In September 1261 he was called to Orvieto as conventual lector responsible for the pastoral formation of the friars unable to attend a studium generale . It was in Orvieto that Thomas completed Summa contra Gentiles, which was followed by the Catena aurea [11] and minor works produced for Pope Urban IV such as the liturgy for the newly created feast of Corpus Christi and the Contra errores graecorum . [5]

Parts of the text have survived in Aquinas's autograph, kept in the Vatican Library as Lat. 9850. The manuscript includes fragments of books one and two, and large portions of book three.

The Summa contra Gentiles consists of four books. The structure of St. Thomas's work is designed to proceed from general philosophical arguments for monotheism, to which Muslims and Jews are likely to consent even within their own respective religious traditions, before progressing to the discussion of specifically Christian doctrine.

Books I–III cover truths that naturally are accessible to the human intellect while Book IV covers revealed truths for which natural reason is inadequate.

Giuseppe Ciante (d. 1670), [12] a leading Hebrew expert of his day and professor of theology and philosophy at the College of Saint Thomas in Rome was appointed in 1640 by Pope Urban VIII to the mission of preaching to the Jews of Rome (Predicatore degli Ebrei) in order to promote their conversion. In the mid-1650s Ciantes wrote a "monumental bilingual edition of the first three Parts of Thomas Aquinas’ Summa contra Gentiles, which includes the original Latin text and a Hebrew translation prepared by Ciantes, assisted by Jewish converts, the Summa divi Thomae Aquinatis ordinis praedicatorum Contra Gentiles quam Hebraicè eloquitur…. Until the present this remains the only significant translation of a major Latin scholastic work in modern Hebrew." [13]

The history of the Jews in Italy spans more than two thousand years to the present. The Jewish presence in Italy dates to the pre-Christian Roman period and has continued, despite periods of extreme persecution and expulsions, until the present. As of 2019, the estimated core Jewish population in Italy numbers around 45,000. 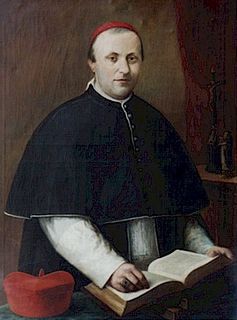 Tommaso Maria Zigliara, OP was a Corsican priest of the Catholic Church, a member of the Dominicans, a theologian, philosopher and a cardinal. 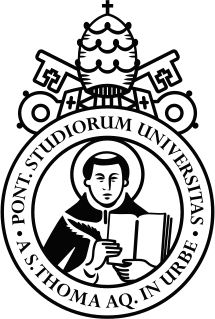 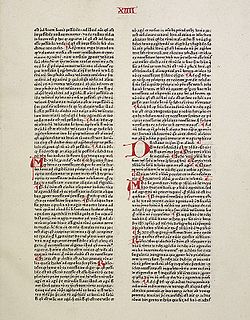 The Summa Theologiae or Summa Theologica, often referred to simply as the Summa, is the best-known work of Thomas Aquinas, a scholastic theologian and Doctor of the Church. It is a compendium of all of the main theological teachings of the Catholic Church, intended to be an instructional guide for theology students, including seminarians and the literate laity. Presenting the reasoning for almost all points of Christian theology in the West, topics of the Summa follow the following cycle: God; Creation, Man; Man's purpose; Christ; the Sacraments; and back to God.

Contra errores Graecorum, ad Urbanum IV Pontificem Maximum is a short treatise written in 1263 by Roman Catholic theologian Saint Thomas Aquinas as a contribution to Pope Urban's efforts at reunion with the Eastern Church. Aquinas wrote the treatise in 1263 while he was papal theologian and conventual lector in the Dominican studium at Orvieto after his first regency as professor of theology at the University of Paris which ended in 1259 and before he took up his duties in 1265 reforming the Dominican studium at Santa Sabina, the forerunner of the Pontifical University of Saint Thomas Aquinas, Angelicum, in Rome.

Hieronymus Medices, was a Roman Catholic philosopher and interpreter of the works of Thomas Aquinas; b. 1569 in Camerino, Umbria, the origin of his surname de Medicis a Camerino.

Angelo Pirotta, O.P. was a major Maltese philosopher. His areas of specialisation in philosophy were chiefly epistemology and metaphysics. 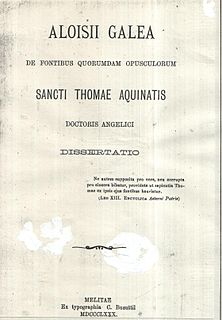 The Triumph of St Thomas Aquinas is a painting by the Italian medieval artist Lippo Memmi, dating likely to 1323, when the former Dominican friar was canonized. It is displayed in the church of Santa Caterina in Pisa, a church once belonging to the Dominican order.