"O Salutaris Hostia" (Latin, "O Saving Victim" or "O Saving Sacrifice"), is a section of one of the Eucharistic hymns written by St Thomas Aquinas for the Feast of Corpus Christi. He wrote it for the Hour of Lauds in the Divine Office. It is actually the last two stanzas of the hymn Verbum supernum prodiens , and is used for the Adoration of the Blessed Sacrament. The other two hymns written by Aquinas for the Feast contain the famous sections Panis angelicus and Tantum ergo.

As a liturgical text, the hymn is usually sung in Latin. There are however some cases in which it is found sung in the vernacular.

In Notre Dame, Paris, France a middle stanza is inserted, localising the text:

A verse rendering of the song is used during the Wednesday Novena Service to Our Lady of Perpetual Help in Baclaran Church, Parañaque, Philippines. Rev. Teofilo Vinteres, C.Ss.R and Alfredo Buenavista are credited with the music and the arrangement, respectively, and both also produced a Filipino translation, Handóg na Tagapágligtás ("Sacrificial Saviour"): 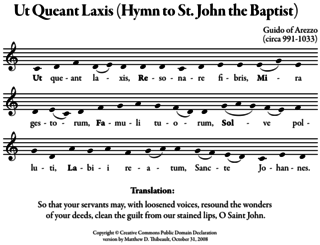 "Ut queant laxis" or "Hymnus in Ioannem" is a Latin hymn in honor of John the Baptist, written in Horatian Sapphics and traditionally attributed to Paulus Diaconus, the eighth-century Lombard historian. It is famous for its part in the history of musical notation, in particular solmization. The hymn belongs to the tradition of Gregorian chant.

The Te Deum is a Latin Christian hymn traditionally ascribed to 387 A.D. authorship, but with antecedents that place it much earlier. It is central to the Ambrosian hymnal, which spread throughout the Latin Church with other parts of the Milanese Rite in the 6th to 8th centuries. It is sometimes known as the "Ambrosian Hymn", although authorship by Saint Ambrose is unlikely. The term Te Deum can also refer to a short religious service based upon the hymn.

"Tantum ergo" is the incipit of the last two verses of Pange lingua, a Medieval Latin hymn generally attributed to St Thomas Aquinas c. 1264, but based by Aquinas upon various earlier fragments. The "Genitori genitoque" and "Procedenti ab utroque" portions are adapted from Adam of Saint Victor's sequence for Pentecost. The hymn's Latin incipit literally translates to "Therefore so great".

"Verbum supernum prodiens" is a Catholic hymn in long metre by St Thomas Aquinas. It was written for the Hour of Lauds in the Divine Office of Corpus Christi. It is about the institution of the Eucharist by Christ at the Last Supper, and His Passion and death.

The ordinary, in Roman Catholic and other Western Christian liturgies, refers to the part of the Eucharist or of the canonical hours that is reasonably constant without regard to the date on which the service is performed. It is contrasted to the proper, which is that part of these liturgies that varies according to the date, either representing an observance within the liturgical year, or of a particular saint or significant event, or to the common which contains those parts that are common to an entire category of saints such as apostles or martyrs.

Panis angelicus is the penultimate strophe of the hymn "Sacris solemniis" written by Saint Thomas Aquinas for the feast of Corpus Christi as part of a complete liturgy of the feast, including prayers for the Mass and the Liturgy of the Hours.

Veni Creator Spiritus is a traditional Christian hymn believed to have been written by Rabanus Maurus, a 9th-century German monk, teacher, and archbishop. When the original Latin text is used, it is normally sung in Gregorian Chant. It has been translated and paraphrased into several languages, and adapted into many musical forms, often as a hymn for Pentecost or for other occasions that focus on the Holy Spirit.

O filii et filiae is a Christian hymn celebrating Easter. It was written by Jean Tisserand, O.F.M., a preacher.

Vytautas Miškinis is a Lithuanian composer, choral conductor and academic teacher. He is artistic director of Ąžuoliukas, a boys' and youth choir and music school, and of other ensembles, performing internationally. He has taught choral conducting at the Lithuanian Academy of Music and Theatre from 1985. His groups have won prizes at international competitions, where he also served as member of the jury. His compositions are part of international standard choral repertoire.

"Sacris solemniis" is a hymn written by St. Thomas Aquinas (1225–1274) for the feast of Corpus Christi. The strophe of Sacris solemniis that begins with the words "Panis angelicus" has often been set to music separately from the rest of the hymn. Most famously, in 1872 César Franck set this strophe for voice (tenor), harp, cello, and organ, and incorporated it into his Messe à trois voix Opus 12. The hymn expresses the doctrine that the bread and wine are changed into the Body and Blood of Christ. In the Roman Catholic tradition the concept of transubstantiation is presented as an explanation of how this change happens.

"Jesus Christus, unser Heiland, der von uns den Gotteszorn wandt" is a Lutheran hymn in ten stanzas by Martin Luther for communion, first published in 1524 in the Erfurt Enchiridion. It is one of Luther's hymns which he wrote to strengthen his concepts of reformation. The models for the text and the melody of Luther's hymn existed in early 15th-century Bohemia. The text of the earlier hymn, "Jesus Christus nostra salus", goes back to the late 14th century. That hymn was embedded in a Hussite tradition.

"Christus, der uns selig macht" is a German Lutheran Passion hymn in eight stanzas in German by Michael Weiße, written in 1531 as a translation of the Latin hymn "Patris Sapientia" to an older melody of the Bohemian Brethren. 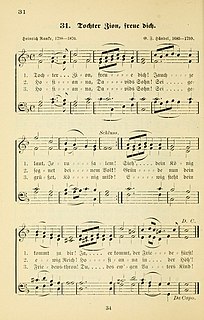 "Tochter Zion, freue dich" is a Christian Advent song in German. The text was written by Friedrich Heinrich Ranke, based on music derived from two of Handel's oratorios. The song was published in 1826, assigned to the Entry into Jerusalem. The hymn is part of the German Protestant hymnal Evangelisches Gesangbuch as EG 13 and the 2013 Catholic hymnal Gotteslob as GL 228, both four-part settings in the Advent section.

O salutaris hostia is a composition for choir a cappella by Vytautas Miškinis, a setting of the Latin prayer O salutaris hostia. Written in 1991, it was published by Carus in 2001. It has been performed in concerts internationally, and was recorded.

"Ye Choirs of New Jerusalem" or "Sing, Choirs of New Jerusalem" is an English Easter hymn by Robert Campbell. It is a 19th-century translation of the medieval Chorus novae Ierusalem, attributed to Fulbert of Chartres. The text's primary focus is the Resurrection of Jesus, taking the theme of Jesus as triumphant victor over death and deliverer of the prisoners from Hell.