Pontificalis Domus (English: The Papal Household) was a motu proprio document issued by Pope Paul VI on 28 March 1968, in the fifth year of his pontificate. It reorganized the Papal Household, which had been known until then as the Papal Court.

Paul VI begins the letter with his rationale for reorganizing the Papal Household. He notes that "many of the offices entrusted to members of the Papal Household were deprived of their function, continuing to exist as purely honorary positions, without much correspondence to concrete needs of the times" (Introduction). His goal in reorganizing its structure will be to stress the "essentially spiritual" mission of the Pope, as well to serve the civic and international aspects of the Pope's office.

He thus divides the Papal Household into two entities: the Chapel (Capella) and the Family (Familia): the Papal Chapel will assist the Pope with his role as spiritual leader of the Catholic religion, while the Family will serve the Pope insofar as he is a publicly recognized sovereign.

Section I: The Papal Household

The first section deals with the overarching structure of the Papal Household. It states that the Papal Household shall be composed of both clergy and laity (1, §1). All members of the Papal Household are subject to the direction of the Prefect of the Apostolic Palace (2), but they are all, both ecclesiastical and lay, appointed by the Supreme Pontiff (3, §1). The tenure of all members of the Papal Chapel is subject to the norms established in the 1967 apostolic constitution Regimini Universae ecclesiae , which reformed the Roman Curia; laity are appointed for a period of five years, but the Pope may extend their term of office (3, §2). All offices will be voided upon the vacancy of the Apostolic See, and no offices are hereditary (3, §3 and §4). Furthermore, all ceremonies of the Papal Household will be categorized as either sacred or civil (sacrae aut civiles); the sacred ceremonies are either solemn or ordinary. (Examples of solemn ceremonies include the coronation of a pope, canonizations, etc.) The civil ceremonies are distinguished as either audiences of official character or of a non-official character (4).

The second section deals with the organization of the Papal Chapel. It is declared to consist of the following classes of persons (6, §1):

The last point of this section defines the role of clerics of the Papal Chapel, who are to assist the Pope at the altar, under the guidance of the papal masters of ceremonies. The suppressed offices of Secret Chaplain and Secret Chaplain of Honor, Secret Cleric, Acolyte Ceroferari, Common Papal Chaplain, and Porter-Masters of the Virga Rubea are to be joined under the general heading of "Cleric of the Papal Chapel" (6, §5).

The third and last section of the document deals with the Papal Family. The Family is composed of both ecclesiastical and lay members. The ecclesiastical members are as follows (7, §1):

The lay members of the Papal Family are composed of the following (7, §2):

Section three goes on to abolish the following offices and positions: Palatine Cardinals (Cardinali Palatini); the Palatine prelates (i.e., Majordomo of His Holiness, Master of the Chamber [Maestro di Camera], Auditor of His Holiness); Master of the Sacred Apostolic Hospice; the Hereditary Quartermaster General of the Sacred Apostolic Palace(Foriere Maggiore); Master of the Horse to His Holiness (Cavallerizzo Maggiore di Sua Santità); General Superintendent of Posts; the Keepers of the Golden Rose; Secretary to Embassies; Esente of the Noble Guard of Service; Chamberlains of Honor in abito paonazzo; Chamberlains of Honor extra Urbem; Secret Chaplains and Secret Chaplains of Honor; Secret Chaplains of Honor extra Urbem; Secret Clerics; Common Papal Chaplains; Confessor of the Pontifical Family; and Secret Steward (Scalco Segreto) (7, §3).

The many offices of honorific ecclesiastical titles—i.e., those given to clerics styled Monsignori—are reduced to three categories: Protonotaries Apostolic (de numero and supernumerary), Prelates of Honor of His Holiness, and Chaplains of His Holiness. All the other categories were abolished (8).

The Corps of the Noble Pontifical Guard assumed the name Honor Guard of the Pope (Guardia d'Onore del Papa), and rendered only an honorary service (9). The Swiss Guard, the Palatine Guard, and the Pontifical Gendarmerie remained in service (10). [note 1]

An Prelate of Honour of His Holiness is a Catholic prelate to whom the Pope has granted this title of honour. They are addressed as Monsignor and have certain privileges as regards clerical clothing.

A mantelletta, Italian diminutive of Latin mantellum 'mantle', is a sleeveless, knee-length, vest-like garment, open in front, with slits instead of sleeves on the sides, fastened at the neck, once even more common than the mozzetta. 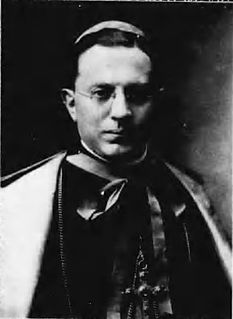 Paolo Marella was an Italian Cardinal of the Roman Catholic Church. He served in the Roman Curia following a career as a delegate of the Holy See, and was elevated to the cardinalate by Pope John XXIII in 1959. 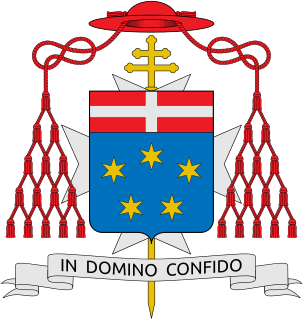 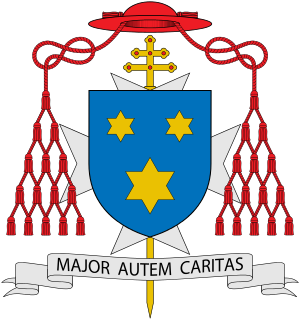 Francesco Morano was an Italian Cardinal of the Roman Catholic Church. He served as Secretary of the Apostolic Signatura in the Roman Curia from 1935 until 1959, and was elevated to the cardinalate in 1959.

Cesare Zerba was an Italian cardinal of the Roman Catholic Church. He served as Secretary of the Sacred Congregation for the Discipline of the Sacraments in the Roman Curia from 1958 to 1965, and was elevated to the cardinalate in 1965.

Evaristo Lucidi was an Italian Cardinal of the Catholic Church. He served as Secretary of the Apostolic Signatura from 1916 to 1923, and was elevated to the cardinalate in 1923.