Quattuor abhinc annos (Latin for "four years ago") is the incipit of a letter that the Congregation for Divine Worship and the Discipline of the Sacraments sent on 3 October 1984 to presidents of episcopal conferences concerning celebration of Mass in the Tridentine form.

The letter explained that previously Pope John Paul II had invited comments from the bishops concerning the reception of the Missal promulgated in 1970 by authority of Pope Paul VI in accordance with the decisions of the Second Vatican Council, and any difficulties arising in the implementation of the liturgical reform. The Congregation subsequently granted diocesan bishops an indult to authorize specified priests and groups of the faithful who requested it, celebration of the Tridentine Mass according to the 1962 Roman Missal promulgated by Pope John XXIII. [1] The permitted Tridentine Masses were to be in full accord with the 1962 Missal and in Latin.

This was not the first time that such an indult had been granted: after the promulgation of the Ordo Missae of 1970, Pope Paul VI issued a letter on 30 October 1971, [2] the so-called Agatha Christie indult, which gave permission to a large segment of priests in the United Kingdom to retain the usage of the classical Roman Rite. [3]

An important condition for granting the requests was "that it be made publicly clear beyond all ambiguity that such priests and their respective faithful in no way share the positions of those who call in question the legitimacy and doctrinal exactitude of the Roman Missal promulgated by Pope Paul VI in 1970." [4]

Diocesan bishops refused many requests by people whom they considered not to have met this condition. But authorization was in fact granted either by diocesan bishops or directly by the Holy See to many priests, parishes and priestly societies, who could then use the older forms of the Roman Rite either exclusively or only on occasion. The priestly societies included the Priestly Fraternity of St. Peter, the Institute of Christ the King Sovereign Priest, and the Personal Apostolic Administration of Saint John Mary Vianney. These used the "Tridentine" liturgical books exclusively, not only for celebrating Mass but also for the other sacraments and rituals and for the Divine Office. Individual priests and communities belonging to religious institutes also received the same authorization. There were such cases among the Fraternity of Saint Vincent Ferrer, the Institute of Saint Philip Neri, the Canons Regular of the New Jerusalem, the Canons Regular of Saint John Cantius, the monasteries of Sainte Madeleine du Barroux and Sainte Marie de la Garde. Various diocesan clergy also availed of the document's provision. See Communities using the Tridentine Mass for a list of priestly societies and religious institutes which celebrate the Tridentine Mass.

The Pope further expanded upon this with the motu proprio Ecclesia Dei of 1988, in which he exhorted the bishops to be generous in granting such a faculty for all the faithful who requested it. [1] Ecclesia Dei supersedes Quattuor abhinc annos regarding the extent of the privilege. [3]

The view that use of the earlier form of the Roman liturgy had never been formally abrogated [5] was authoritatively confirmed by Pope Benedict XVI, who declared that permission to use it (which can be granted by the priest in charge of the church) is required only for public celebration. [6]

Pope Benedict XVI revoked the directives on 7 July 2007, replacing them with the norms enunciated in his motu proprio Summorum Pontificum . [7]

The Mass of Paul VI, also known as the Ordinary Form of the Roman Rite Mass, the most commonly used liturgy in the Latin Church, sometimes referred as the post–Vatican II Mass, is the form promulgated after the Second Vatican Council (1962–65) by Pope Paul VI in 1969. It was published by him in the 1970 edition of the Roman Missal and the revised 1975 edition, and as further revised by Pope John Paul II in 2000 and published in the third Vatican II edition (2002). 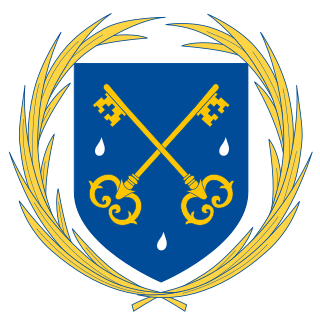 An indult in Catholic canon law is a permission, or privilege, granted by the competent church authority – the Holy See or the diocesan bishop, as the case may be – for an exception from a particular norm of church law in an individual case.

Álvaro Corrada del Río, S.J. is a Puerto Rican prelate of the Roman Catholic Church and member of the Society of Jesus. He served as the second Bishop of Mayagüez, Puerto Rico. He previously served as the Bishop of Tyler, Texas.

For a number of years after the controversial 1988 consecrations, there was little if any dialogue between the Society of St. Pius X and the Holy See. This state of affairs ended when the Society led a large pilgrimage to Rome for the Jubilee in the year 2000.

The Ceremonial of John XXIII was the last to use full papal ceremony, much of which was abolished subsequently after Vatican II.

Sts. Cyril and Methodius Parish is a Roman Catholic church in Bridgeport, Connecticut, now part of the Diocese of Bridgeport.