Servant of the servants of God

Servant of the servants of God (Latin : servus servorum Dei) [1] is one of the titles of the pope and is used at the beginning of papal bulls. [2]

Pope Gregory I (pope from 590 to 604) was the first pope to use this title extensively to refer to himself as Pope, [3] reportedly doing so as a lesson in humility for the Archbishop of Constantinople John the Faster, who had been granted the title "Ecumenical Patriarch" by the Byzantine Emperor: the humble title "Servant of the Servants of God" countervailed the other's claim of power and eminence against the Bishop of Rome (the pope). Some of Pope Gregory's successors used the phrase off and on for some centuries, but they did so regularly only from the 9th century. At times, some civil rulers also used this title, but after the 12th century it came to be used exclusively by the Pope.[ citation needed ]

This papal title also has a biblical background found in the Gospel according to Saint Matthew, chapter 20, verses 25 to 27: 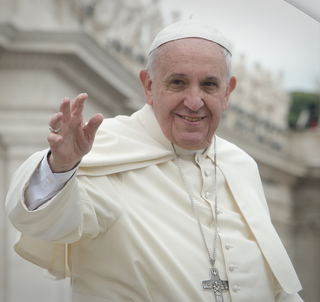 The pope, also known as the supreme pontiff or the Roman pontiff, is the bishop of Rome, head of the worldwide Catholic Church and head of state or sovereign of the Vatican City State. According to Catholics, the primacy of the bishop of Rome is largely derived from his role as the apostolic successor to Saint Peter, to whom primacy was conferred by Jesus, giving him the Keys of Heaven and the powers of "binding and loosing", naming him as the "rock" upon which the church would be built. The current pope is Francis, who was elected on 13 March 2013. 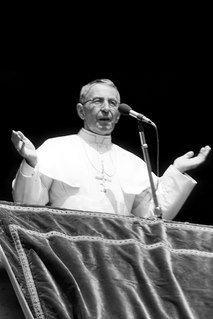 Pope John Paul I was head of the Catholic Church and sovereign of the Vatican City from 26 August 1978 to his death 33 days later. He was the first pope to have been born in the 20th century. His reign is among the shortest in papal history, resulting in the most recent year of three popes and the first to occur since 1605. John Paul I remains the most recent Italian-born pope, the last in a succession of such popes that started with Clement VII in 1523. 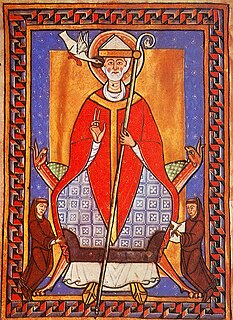 Pope Gregory I, commonly known as Saint Gregory the Great, was the bishop of Rome from 3 September 590 to his death. He is known for instigating the first recorded large-scale mission from Rome, the Gregorian Mission, to convert the then-pagan Anglo-Saxons in England to Christianity. Gregory is also well known for his writings, which were more prolific than those of any of his predecessors as pope. The epithet Saint Gregory the Dialogist has been attached to him in Eastern Christianity because of his Dialogues. English translations of Eastern texts sometimes list him as Gregory "Dialogos", or the Anglo-Latinate equivalent "Dialogus". 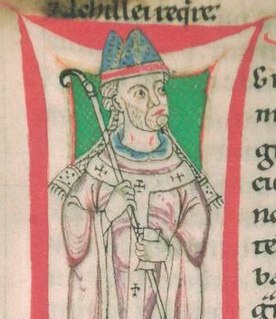 The pallium is an ecclesiastical vestment in the Roman Catholic Church, originally peculiar to the pope, but for many centuries bestowed by the Holy See upon metropolitans and primates as a symbol of their conferred jurisdictional authorities, and still remains a papal emblem. In its present (western) form, the pallium is a long and "three fingers broad" (narrow) white band adornment, woven from the wool of lambs raised by Trappist monks. It is donned by looping its middle around one's neck, resting upon the chasuble and two dependent lappets over one's shoulders with tail-ends (doubled) on the left with the front end crossing over the rear. When observed from the front or rear the pallium sports a stylistic letter 'y'. It is decorated with six black crosses, one near each end and four spaced out around the neck loop. At times the pallium is embellished fore and aft with three gold gem-headed (dull) stickpins. The doubling and pinning on the left shoulder likely survive from the Roman pallium. The pallium and the omophor originate from the same vestment, the latter a much larger and wider version worn by Eastern Orthodox and Eastern Catholic bishops of the Byzantine Rite. A theory relates origination to the paradigm of the Good Shepherd shouldering a lamb, a common early Christian art image — but this may be an explanation a posteriori, however the ritual preparation of the pallium and its subsequent bestowal upon a pope at coronation suggests the shepherd symbolism. The lambs whose fleeces are destined for pallia are solemnly presented at altar by the nuns of the convent of Saint Agnes outside the walls and ultimately the Benedictine nuns of Santa Cecilia in Trastevere weave their wool into pallia. 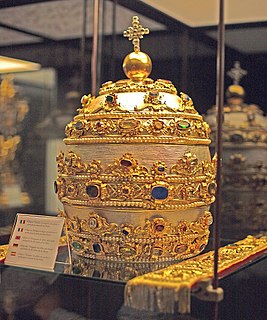 "Servant of God" is a term used for individuals by various religions for people believed to be pious in the faith's tradition. In the Catholic Church, it is the first step in designating an individual who is being investigated by the Church for possible canonization as a saint. In the Eastern Orthodox Church, this term is used to refer to any Eastern Orthodox Christian. The Arabic name Abdullah, the German name Gottschalk, and the Sanskrit name Devadasa are all variations of "servant of God". 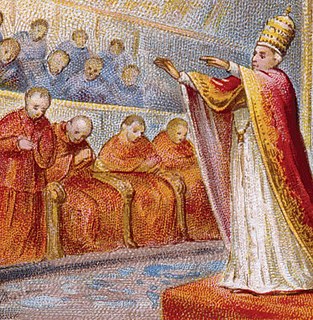 Papal supremacy is the doctrine of the Catholic Church that the Pope, by reason of his office as Vicar of Christ, the visible source and foundation of the unity both of the bishops and of the whole company of the faithful, and as pastor of the entire Catholic Church, has full, supreme, and universal power over the whole Church, a power which he can always exercise unhindered: that, in brief, "the Pope enjoys, by divine institution, supreme, full, immediate, and universal power in the care of souls." 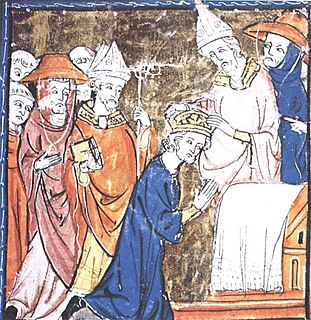 The Coronation of the Holy Roman Emperor was a ceremony in which the ruler of Western Europe's then-largest political entity received the Imperial Regalia at the hands of the Pope, symbolizing both the pope's right to crown Christian sovereigns and also the emperor's role as protector of the Roman Catholic Church. The Holy Roman Empresses were crowned as well.

Wiching or Viching was the first bishop of Nitra, in present-day Slovakia.