An Apostolic Exarch was appointed for Bulgarian Catholic Apostolic Vicariate of Macedonia as early as 1883 and lasting until 1922/1924 as part of the Bulgarian Greek Catholic Church. [4] After the end of World War I and the foundation of Yugoslavia, the Exarchate was absorbed into the Eparchy of Križevci.

In January 2001, a separate Greek Catholic Apostolic Exarchate of Macedonia was formed for Eastern Catholics of the Byzantine Rite in North Macedonia. It was separated from the Eparchy of Križevci and constituted as immediately subject to the Holy See. [5] On the same day (11 January 2001) the Holy See appointed the Latin Bishop of Skopje as the first Apostolic Exarch of North Macedonia. [6] 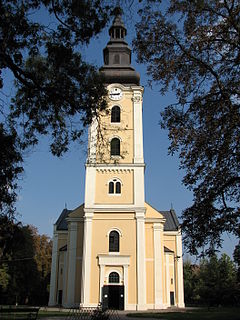 Monsignor Dr. Joakim Herbut 14 February 1928 – 15 April 2005) was a Macedonian Catholic prelate. He was bishop of the Roman Catholic diocese of Skopje-Prizren from 1969 to 2005 and exarch of the Greek Catholic Apostolic Exarch of Macedonia from 2001 to 2005.