According to the United States Conference of Catholic Bishops, "the separation of church and state does not require division between belief and public action, between moral principles and political choices, but protects the right of believers and religious groups to practice their faith and act on their values in public life." [1]

As a program and a movement, political Catholicism - a political and cultural conception which promotes the ideas and social teaching of the Catholic Church in public life through government action - was started by Prussian Catholics in the second half of the 19th century. They were responding to the secular social measures of Chancellor Otto von Bismarck to limit the influence of Catholic Church, first in Prussia, and then in united Germany, a struggle known as the Kulturkampf .

From Germany, political Catholic social movements spread in Austria-Hungary, especially in today's Austria, Ukraine, Slovenia and Croatia. Catholic Action was the name of many groups of lay Catholics attempting to encourage Catholic influence on political society.

Political changes in Spain during the second half of the nineteenth century led to the development of Catholic Integrism and Carlism struggling against a separation of church and state. The clearest expression of this struggle arose around the 1884 publication of the book Liberalism is a Sin . The book was rapidly referred to Rome, where it received a positive, albeit cautious welcome. [2]

Pope Leo XIII's 1891 encyclical Rerum novarum (Of New Things) gave political Catholic movements an impulse to develop and to spread the area of their involvement. With this encyclical, the Catholic Church expanded its interest in social, economic, political and cultural issues, and it called for a drastic conversion of Western society in the 19th century in the face of capitalist influences. Following the release of the document, the labour movement which had previously floundered began to flourish in Europe, and later in North America. Mary Harris Jones ("Mother Jones") and the National Catholic Welfare Council were central in the campaign to end child labour in the United States during the early 20th century.

Catholic movements in the 20th century

In the 20th century, Catholic political movements became very strong in Spain, Italy, Germany, Austria, Ireland, France and Latin America. What these movements had in common was a defense of the acquired rights of the Catholic Church (attacked by anticlerical politicians) and a defense of Christian faith and moral values (threatened by increasing secularization). Opponents called such efforts clericalism.

These Catholic movements developed various forms of Christian democratic ideology, generally promoting a morally and socially conservative agenda while supporting a middle ground or third way between unrestrained capitalism and state socialism. Freemasons were seen mainly as enemies and vehement opponents of political Catholicism. In 1920's Mexico, an atheistic president repressed the Church and Catholics, leading to the Cristero War revolution of 1926 to 1929.

Some of the earliest important political parties were:

Most of these parties in Europe joined together in the White International (1922), in opposition to the Communist International. Franco's mixture of Catholicism and nationalism received its own brand of National Catholicism and it inspired similar movements throughout Europe. [3]

In addition to political parties, Catholic/Christian trade unions were created, which fought for worker's rights: the earliest include:

After World War II, more such unions were formed, including:

Until the Second Vatican Council, the Church did not always accept the model of modern democracy and its expansion into social and economic realms because it was wary of anticlerical socialistic tendencies. When Catholic social activists were perceived to be too extreme in social conflicts, the Church hierarchy tried to restrain their excesses; this included the Worker-priest movement in France in the 1940s and 50s, and liberation theology in Latin America in the 60s, 70s, and 80s. But some movements were strongly supported by the Church - in Australia the Catholic Social Studies Movement during the 40s and 50s, from which the National Civic Council developed.

Catholic clergy and lay activists sometimes tended to support far-right leaders such Francisco Franco and António de Oliveira Salazar, as well as the military regimes in Latin America. As a result, many workers involved in the labor movement joined social democratic and communist parties, which were mostly secular and called for revolution against old values, including religion and the Church.

In recent times, Christian engagement in politics has weakened, and even the nominal "Demo-Christian" parties have lost some of their Christian values. Stronger Christian involvement in Europe at the beginning of the 21st century has produced some new small parties, for example those joined in the European Christian Political Movement. According to New York Times columnist Ross Douthat, part of the younger generation of Catholics are now showing a renewed interest in forms of political Catholicism such as a revived Catholic Integralism or Tradinista! socialism. [4]

Catholics are called to participate in the political process, be informed voters, and to encourage elected officials to act on behalf of the common good. There are limits to official Catholic Church political activity. The Church engages in issue-related activity, not partisan political candidate activities. This restriction does not apply to individuals or group provided they do not represent themselves as acting in an official Church capacity. [5]

Every two years the USCCB produces "Faithful Citizenship" guides, to provide guidelines and explanations of Catholic teaching to Catholic voters. [6]

Left-wing politics supports social equality and egalitarianism, often in opposition to social hierarchy. It typically involves a concern for those in society whom its adherents perceive as disadvantaged relative to others as well as a belief that there are unjustified inequalities that need to be reduced or abolished.

In politics, integralism or integrism is the set of theoretical concepts and practical policies that advocate a fully integrated social and political order, based on converging patrimonial (inherited) political, cultural, religious, and national traditions of a particular state, or some other political entity. Some forms of integralism are focused on achieving political and social integration, and also national or ethnic unity, while others were more focused on achieving religious and cultural uniformity. In the political and social history of the 19th and 20th centuries, integralism was often related to traditionalist conservatism and similar political movements on the right wing of a political spectrum, but it was also adopted by various centrist movements as a tool of political, national and cultural integration.

Social conservatism is the belief that society is built upon a fragile network of relationships which need to be upheld through duty, traditional values and established institutions. This can include moral issues. Social conservatism is generally sceptical of social change, and believes in maintaining the status quo concerning social issues such as family life, sexual relations, and patriotism.

Christian democracy is a political ideology that emerged in 19th-century Europe under the influence of Catholic social teaching. Christian democratic political ideology advocates for a commitment to social market principles and qualified interventionism. It was conceived as a combination of modern democratic ideas and traditional Christian values, incorporating the social teachings espoused by the Catholic, Lutheran, Reformed, and Pentecostal traditions in various parts of the world. After World War II, the Protestant and Catholic movements of the Social Gospel and Neo-Thomism, respectively, played a role in shaping Christian democracy. Christian democracy continues to be influential in Europe and Latin America, although it is also present in other parts of the world.

Political colours are colours used to represent a political ideology, movement or party, either officially or unofficially. Parties in different countries with similar ideologies sometimes use similar colours. For example, the colour red symbolises left-wing ideologies in many countries, while the colour orange symbolizes Christian democratic political ideology, and the colour yellow is most commonly associated with liberalism and right-libertarianism.

Pro-Europeanism, sometimes called European Unionism, is a political position that favours European integration and membership of the European Union (EU). It includes European federalists, who seek to create a federal European Union known informally as a United States of Europe. A related term is ’Europhile’.

Liberal conservatism is a political ideology combining conservative policies with liberal stances, especially on economic, social and ethical issues, or a brand of political conservatism strongly influenced by liberalism. 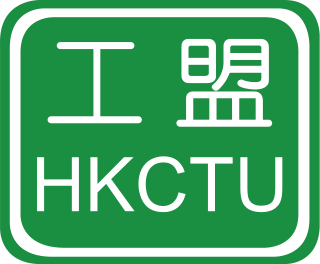 The Hong Kong Confederation of Trade Unions is a pro-democracy labour and political group in the Hong Kong. It was established in 1990. It has 160,000 members in 61 affiliates and has representation in the Legislative Council of Hong Kong (LegCo) to challenge government policies and push for legal protection of worker and trade union rights. It is one of the two most influential labour groups in Hong Kong..

Catholic Action was the name of many groups of lay Catholics who were attempting to encourage a Catholic influence on society.