Last updated July 28, 2020
Not to be confused with Liberal conservatism or Libertarian conservatism.

Conservative liberalism is a variant of liberalism, combining liberal values and policies with conservative stances, or simply representing the right wing of the liberal movement. [1] It is a more positive and less radical variant of classical liberalism. [2]

According to Robert Kraynak, a professor at Colgate University, rather than "following progressive liberalism (i.e. social liberalism), conservative liberals draw upon pre-modern sources, such as classical philosophy (with its ideas of virtue, the common good, and natural rights), Christianity (with its ideas of natural law, the social nature of man, and original sin), and ancient institutions (such as common law, corporate bodies, and social hierarchies). This gives their liberalism a conservative foundation. It means following Plato, Aristotle, St. Augustine, St. Thomas Aquinas, and Edmund Burke rather than Locke or Kant; it usually includes a deep sympathy for the politics of the Greek polis , the Roman Republic, and Christian monarchies. But, as realists, conservative liberals acknowledge that classical and medieval politics cannot be restored in the modern world. And, as moralists, they see that the modern experiment in liberty and self-government has the positive effect of enhancing human dignity as well as providing an opening (even in the midst of mass culture) for transcendent longings for eternity. At its practical best, conservative liberalism promotes ordered liberty under God and establishes constitutional safeguards against tyranny. It shows that a regime of liberty based on traditional morality and classical-Christian culture is an achievement we can be proud of, rather than merely defensive about, as trustees of Western civilization". [5]

In the United States, neoconservatives might be classified as conservative liberals, according to Peter Lawler, a professor at Berry College, who argued: "[I]n America today, responsible liberals—who are usually called neoconservatives—see that liberalism depends on human beings who are somewhat child-centered, patriotic, and religious. These responsible liberals praise these non-individualistic human propensities in an effort to shore up liberalism. One of their slogans is 'conservative sociology with liberal politics.' The neoconservatives recognize that the politics of free and rational individuals depends upon a pre-political social world that is far from free and rational as a whole". [8] In the American context, conservative liberalism as well as liberal conservatism should not be confused with libertarian conservatism, influenced by right-libertarianism.

Right-wing politics holds the view that certain social orders and hierarchies are inevitable, natural, normal, or desirable, typically supporting this position on the basis of natural law, economics, or tradition. Hierarchy and inequality may be viewed as natural results of traditional social differences or the competition in market economies. The term right-wing can generally refer to "the conservative or reactionary section of a political party or system".

The Reformist Movement is a liberal French-speaking political party in Belgium. The party is in coalition as part of the Michel Government then Wilmès Government since October 2014, providing the current Prime Minister of Belgium Sophie Wilmès. After the 2007 general election the MR was the largest Francophone political formation in Belgium, a position that was regained by the Socialist Party in the 2010 general election.

The Union for French Democracy was a centre-right political party in France. It was founded in 1978 as an electoral alliance to support President Valéry Giscard d'Estaing in order to counterbalance the Gaullist preponderance over the political right in France. This name was chosen due to the title of Giscard d'Estaing's 1976 book, Démocratie française. The party brought together Christian democrats, liberals and radicals, and non-Gaullist conservatives, and described itself as centrist.

Christian democracy is a political ideology that emerged in 19th-century Europe under the influence of Catholic social teaching, as well as Neo-Calvinism. Christian democratic political ideology advocates for a commitment to social market principles and qualified interventionism. It was conceived as a combination of modern democratic ideas and traditional Christian values, incorporating the social teachings espoused by the Catholic, Lutheran, Reformed, and Pentecostal traditions in various parts of the world. After World War II, the Protestant and Catholic movements of the Social Gospel and Neo-Thomism, respectively, played a role in shaping Christian democracy. Christian democracy continues to be influential in Europe and Latin America, although it is also present in other parts of the world.

Centre-right politics or center-right politics, also referred to as moderate-right politics, are politics that lean to the right of the left–right political spectrum, but are closer to the centre than other right-wing politics. From the 1780s to the 1880s, there was a shift in the Western world of social class structure and the economy, moving away from the nobility and mercantilism, as well as moving toward the bourgeoisie and capitalism. This general economic shift toward capitalism affected centre-right movements such as the British Conservative Party, that responded by becoming supportive of capitalism.

Conservatism in the United States is a political and social philosophy characterized by respect for American traditions, republicanism, support for Christian values, moral universalism, pro-business, anti-labor union, anti-communism, pro-individualism, advocacy of American exceptionalism, and a defense of Western culture from the perceived threats posed by socialism, communism, and moral relativism.

National conservatism is a variant of conservatism common in Europe and Asia that concentrates on upholding national and cultural identity, while mixing conservative elements with purely nationalist ones. 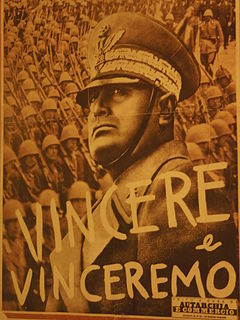 The history of fascist ideology is long and draws on many sources. Fascists took inspiration from sources as ancient as the Spartans for their focus on racial purity and their emphasis on rule by an elite minority. Fascism has also been connected to the ideals of Plato, though there are key differences between the two. Fascism styled itself as the ideological successor to Rome, particularly the Roman Empire. The concept of a "high and noble" Aryan culture as opposed to a "parasitic" Semitic culture was core to Nazi racial views. From the same era, Georg Wilhelm Friedrich Hegel's view on the absolute authority of the state also strongly influenced Fascist thinking. The French Revolution was a major influence insofar as the Nazis saw themselves as fighting back against many of the ideas which it brought to prominence, especially liberalism, liberal democracy and racial equality, whereas on the other hand Fascism drew heavily on the revolutionary ideal of nationalism. Common themes among fascist movements include; nationalism, hierarchy and elitism, militarism, quasi-religion, masculinity and philosophy. Other aspects of fascism such as its "myth of decadence", anti‐egalitarianism and totalitarianism can be seen to originate from these ideas. These fundamental aspects however, can be attributed to a concept known as "Palingenetic ultranationalism", a theory proposed by Roger Griffin, that fascism is a synthesis of totalitarianism and ultranationalism sacralized through myth of national rebirth and regeneration.

Social democracy is a political, social and economic philosophy within socialism that supports political and economic democracy. As a policy regime, it is described by academics as advocating economic and social interventions to promote social justice within the framework of a liberal democratic polity and a capitalist-oriented mixed economy. The protocols and norms used to accomplish this involve a commitment to representative and participatory democracy, measures for income redistribution, regulation of the economy in the general interest and social-welfare provisions. Due to longstanding governance by social-democratic parties during the post-war consensus and their influence on socioeconomic policy in Northern and Western Europe, social democracy became associated with Keynesianism, the Nordic model, the social-liberal paradigm and welfare states within political circles in the late 20th century. It has been described as the most common form of Western or modern socialism as well as the reformist wing of democratic socialism. While having socialism as a long-term goal, social democracy seeks to humanize capitalism and create the conditions for it to lead to greater democratic, egalitarian and solidaristic outcomes. It is characterized by a commitment to policies aimed at curbing inequality, eliminating oppression of underprivileged groups and eradicating poverty as well as support for universally accessible public services like care for the elderly, child care, education, health care and workers' compensation. It often has strong connections with the labour movement and trade unions, being supportive of collective bargaining rights for workers and measures to extend decision-making beyond politics into the economic sphere in the form of co-determination for employees and stakeholders.

Progressivism is a political philosophy in support of social reform. Based on the idea of progress in which advancements in science, technology, economic development and social organization are vital to the improvement of the human condition, progressivism became highly significant during the Age of Enlightenment in Europe, out of the belief that Europe was demonstrating that societies could progress in civility from uncivilized conditions to civilization through strengthening the basis of empirical knowledge as the foundation of society. Figures of the Enlightenment believed that progress had universal application to all societies and that these ideas would spread across the world from Europe.

Conservatism in the United Kingdom is related to its counterparts in other Western nations, but has a distinct tradition and has encompassed a wide range of theories over the decades. The Conservative Party, which forms the mainstream centre-right party in Britain, has developed many different internal factions and ideologies.