Liberal internationalism emerged during the nineteenth century, notably under the auspices of British Foreign Secretary and Prime Minister Lord Palmerston, and was developed in the second decade of the 20th century under U.S. President Woodrow Wilson. In this form it became known as Wilsonianism. [1]

The goal of liberal internationalism is to achieve global structures within the international system that are inclined towards promoting a liberal world order. To that extent, global free trade, liberal economics and liberal political systems are all encouraged. In addition, liberal internationalists are dedicated towards encouraging democracy to emerge globally. Once realized, it will result in a 'peace dividend', as liberal states have relations that are characterized by non-violence, and that relations between democracies is characterized by the democratic peace theory.

Liberal internationalism states that, through multilateral organizations such as the United Nations, it is possible to avoid the worst excesses of "power politics" in relations between nations.

Pax Americana is a term applied to the concept of relative peace in the Western Hemisphere and later the world beginning around the middle of the 20th century, thought to be caused by the preponderance of power enjoyed by the United States. Although the term finds its primary utility in the latter half of the 20th century, it has been used with different meanings and eras, such as the post-Civil War era in North America, and regionally in the Americas at the start of the 20th century. Pax Americana is primarily used in its modern connotations to refer to the peace among great powers established after the end of World War II in 1945, also called the Long Peace. In this modern sense, it has come to indicate the military and economic position of the United States in relation to other nations. For example, the Marshall Plan, which spent $13 billion to rebuild the economy of Western Europe, has been seen as "the launching of the pax americana". 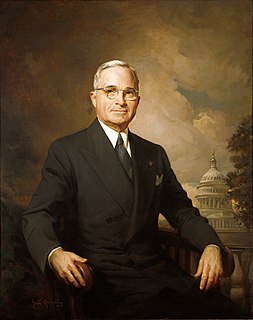 The Truman Doctrine was an American foreign policy whose stated purpose was to contain Soviet geopolitical expansion during the Cold War. It was announced to Congress by President Harry S. Truman on March 12, 1947, and further developed on July 4, 1948, when he pledged to contain the communist uprisings in Greece and Turkey. Direct American military force was usually not involved, but Congress appropriated financial aid to support the economies and militaries of Greece and Turkey. More generally, the Truman Doctrine implied American support for other nations thought to be threatened by Soviet communism. The Truman Doctrine became the foundation of American foreign policy, and led, in 1949, to the formation of NATO, a military alliance that still exists. Historians often use Truman's speech to date the start of the Cold War. 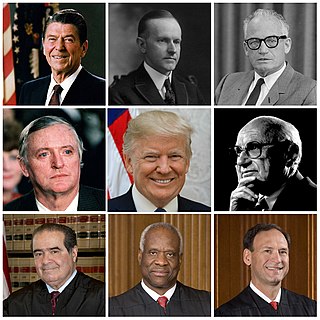 Neoconservatism is a political movement born in the United States during the 1960s among liberal hawks who became disenchanted with the increasingly pacifist foreign policy of the Democratic Party, and the growing New Left and counterculture, in particular the Vietnam protests. Some also began to question their liberal beliefs regarding domestic policies such as the Great Society.

Grand strategy or high strategy is the long-term strategy pursued at the highest levels by a nation to further its interests. Issues of grand strategy typically include the choice of primary versus secondary theaters in war, distribution of resources among the various services, the general types of armaments manufacturing to favor, and which international alliances best suit national goals. With considerable overlap with foreign policy, grand strategy focuses primarily on the military implications of policy. A country's political leadership typically directs grand strategy with input from the most senior military officials. Development of a nation's grand strategy may extend across many years or even multiple generations. 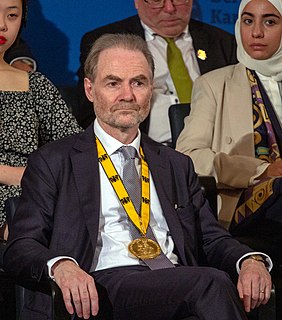 Timothy Garton Ash CMG FRSA is a British historian, author and commentator. He is Professor of European Studies at Oxford University. Much of his work has been concerned with the late modern and contemporary history of Central and Eastern Europe.

Non-interventionism is the diplomatic policy whereby a nation seeks to avoid alliances with other nations in order to avoid being drawn into wars not related to direct territorial self-defense. It has had a long history among elite and popular opinion in the United States. At times, the degree and nature of this policy was better known as isolationism, such as the period between the world wars.

Interventionism is a policy of non-defensive (proactive) activity undertaken by a nation-state, or other geo-political jurisdiction of a lesser or greater nature, to manipulate an economy and/or society. The most common applications of the term are for economic interventionism, and foreign interventionism.

Idealism in the foreign policy context holds that a nation-state should make its internal political philosophy the goal of its conduct and rhetoric in international affairs. For example, an idealist might believe that ending poverty at home should be coupled with tackling poverty abroad. Both within and outside of the United States, American president Woodrow Wilson is widely considered an early advocate of idealism and codifier of its practical meaning; specific actions cited include the issuing of the famous "Fourteen Points".

In the study of international relations, neoliberalism refers to a school of thought which believes that states are, or at least should be, concerned first and foremost with absolute gains rather than relative gains to other states. Neoliberalism is a revised version of liberalism.

Non-interventionism or non-intervention is a foreign policy that holds that political rulers should avoid interfering in the affairs of foreign nations relations but still retain diplomacy and trade, while avoiding wars unless related to direct self-defense. A 1915 definition is that non-interventionism is a policy characterized by the absence of "interference by a state or states in the external affairs of another state without its consent, or in its internal affairs with or without its consent".

Wilsonianism or Wilsonian describe a certain type of foreign policy advice. The term comes from the ideas and proposals of President Woodrow Wilson (1913-1921). He issued his famous Fourteen Points in January 1918 as a basis for ending World War I and promoting world peace. He was a leading advocate of the League of Nations in order to enable the international community to avoid wars and end hostile aggression. Wilsonianism is a form of liberal internationalism. Wilson learned from American history and applied that knowledge and democratic model to his ideas on international relations.

Westphalian sovereignty, or state sovereignty, is a principle in international law that each state has exclusive sovereignty over its territory. The principle underlies the modern international system of sovereign states and is enshrined in the United Nations Charter, which states that "nothing should authorise intervention in matters essentially within the domestic jurisdiction of any state." According to the idea, every state, no matter how large or small, has an equal right to sovereignty. Political scientists have traced the concept to the Peace of Westphalia (1648), which ended the Thirty Years' War. The principle of non-interference was further developed in the 18th century. The Westphalian system reached its peak in the 19th and 20th centuries, but it has faced recent challenges from advocates of humanitarian intervention.

British neoconservatism is sometimes more socially liberal than its US counterpart, but shares a world view of threats and opportunities. British neoconservatives are strong proponents of foreign intervention in the Arab world and beyond, the role of the private sector in military contracts and an alliance with Israel.

Internationalism is a political principle which advocates a greater political or economic cooperation among nations and people.

Proletarian internationalism, sometimes referred to as international socialism, is the perception of all communist revolutions as being part of a single global class struggle rather than separate localized events. It is based on the theory that capitalism is a world-system and therefore the working classes of all nations must act in concert if they are to replace it with communism. Proponents of proletarian internationalism often argued that the objectives of a given revolution should be global rather than local in scope—for example, triggering or perpetuating revolutions elsewhere.