Catholic spiritual teaching includes spreading the Gospel while Catholic social teaching emphasises support for the sick, the poor and the afflicted through the corporal and spiritual works of mercy. The Catholic Church is the largest non-governmental provider of education and medical services in the world. [1]

The Catholic church has had a long tradition of co-ordinating charity to the poor, something that was closely linked to the early Christian eucharist, with the office of deacon being started for this purpose. [2]

Over time this became a part of the bishop's responsibilities and then from the fourth century onwards was decentralised to parishes and monastic orders. After the reformation the church lost a large amount of property in both Catholic and Protestant countries, and after a period of sharply increased poverty poor relief had to become more tax based.

Within the United States, each diocese typically has a Catholic Charities organization that is run as a diocesan corporation, that is to say, a civil corporation owned by the diocese or archdiocese. 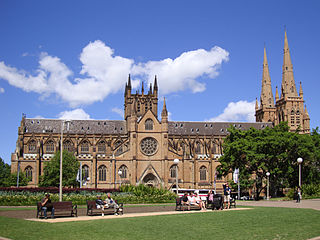 The Catholic Church in Australia is part of the worldwide Catholic Church under the spiritual and administrative leadership of the Holy See. From origins as a suppressed, mainly Irish minority in early colonial times, the church has grown to be the largest Christian denomination in Australia, with a culturally diverse membership of around 5,439,268 people, representing about 23% of the overall population of Australia according to the 2016 census.

The Franciscan Sisters of Christian Charity are a Congregation of Roman Catholic apostolic religious women. The congregation was founded in 1869 in Manitowoc, Wisconsin in the Roman Catholic Archdiocese of Milwaukee, later part of the Roman Catholic Diocese of Green Bay. The sisters have active apostolates in education, health care, spiritual direction, and other community ministries. As of 2021, there are 188 sisters in the community. The FSCC is a member of the Council of Major Superiors of Women Religious, an organization which represents women religious in the United States.

Catholic schools are pre-primary, primary and secondary educational institutions administered under the aegis or in association with the Catholic Church. As of 2011, the Catholic Church operates the world's largest religious, non-governmental school system. In 2016, the church supported 43,800 secondary schools and 95,200 primary schools. The schools include religious education alongside secular subjects in their curriculum.

The Institute of Christ the King Sovereign Priest is a Roman Catholic society of apostolic life of pontifical right in communion with the Holy See of the Catholic Church. The institute has the stated goal of honoring God and the sanctification of priests in the service of the Catholic Church and souls. An integral part of the institute’s charism is the use of the traditional Latin liturgy of 1962 for Mass and the other sacraments. It has undertaken the restoration of a number of historic church buildings.

Catholic Relief Services (CRS) is the international humanitarian agency of the Catholic community in the United States. Founded in 1943 by the Bishops of the United States, the agency provides assistance to 130 million people in more than 110 countries and territories in Africa, Asia, Latin America, the Middle East and Eastern Europe.

A society of apostolic life is a group of men or women within the Catholic Church who have come together for a specific purpose and live fraternally. It is regarded as a form of consecrated life.

The Archdiocese of Miami is a particular church of the Catholic Church in the United States of America. Its ecclesiastical territory consists of Broward, Miami-Dade and Monroe counties in the U.S. state of Florida. The archdiocese is the metropolitan see for the Ecclesiastical Province of Miami, which covers Florida. The archbishop is Thomas Wenski. As archbishop, he also serves as pastor of the Cathedral of Saint Mary, the mother church of the archdiocese. Also serving are 258 priests, 133 permanent deacons, 41 religious brothers and 204 religious sisters who are members of various religious institutes. These priests, deacons and persons religious serve a Catholic population in South Florida of 475,774 in 109 parishes and missions. 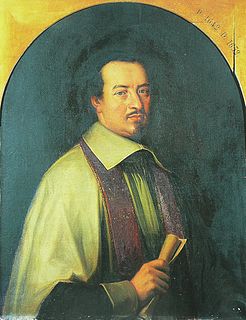 Jean-Jacques Olier, S.S., was a French Catholic priest and the founder of the Sulpicians. He helped to establish the Société Notre-Dame de Montréal, which organized the settlement of a new town called Ville-Marie in the colony of New France.

Catholic Charities is a network of charities with headquarters in Alexandria, Virginia. In 2005 Forbes magazine ranked it as the fifth largest charity in the United States in terms of total revenue. The organization serves millions of people a year, regardless of their religious, social, or economic backgrounds. In 2019, 12 million persons were served at more than 2600 locations. Next to the federal government, Catholic Charities is the largest US social-safety-net provider.

Exsul Familia is the apostolic constitution written by Pope Pius XII on the topic of migration. It was released on 1 August 1952. The title of the document refers to the migrant Holy Family, forced to flee into Egypt, taken as the archetype of every refugee family. Exsul Familia is the only papal document in which Pope Pius himself outlines the nature and extent of Papal charities during and after World War II on millions of refugees and displaced persons.

The Sisters of Providence of Holyoke, Massachusetts, are a congregation of Roman Catholic religious sisters founded in 1892.

The Catholic Church is the largest non-government provider of health care services in the world. It has around 18,000 clinics, 16,000 homes for the elderly and those with special needs, and 5,500 hospitals, with 65 percent of them located in developing countries. In 2010, the Church's Pontifical Council for the Pastoral Care of Health Care Workers said that the Church manages 26% of the world's health care facilities. The Church's involvement in health care has ancient origins. 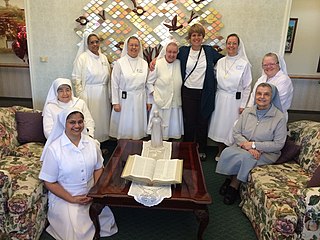 Caritas Internationalis is a confederation of 162 Catholic relief, development and social service organizations operating in over 200 countries and territories worldwide.

Christian humanitarian aid is work performed by Christian non-governmental organizations (NGOs) to alleviate the suffering of people around the world. Charity is a concept of great importance in Christianity. Humanitarian aid occurs in areas where some churches donate financial resources and get involved in order to show compassion.