The International Federation of Catholic Universities (IFCU) is an organisation of over 200 Catholic universities throughout the world.[ citation needed ]

Founded in 1924 [2] . Created by a Papal Decree in 1948 as the Fœderatio Universitatum Catholicarum it became the International Federation of Catholic Universities in 1965. [3] The federation has its origins in collaboration in 1924 between the Università Cattolica del Sacro Cuore in Milan and the Catholic university of Nijmegen in the Netherlands. The FIUC facilitates, research, partnership and exchange programmes between catholic institutes of education. [4] The secretariat is in Paris; Institut Catholique de Paris.

Radboud University is a public university with a strong focus on research located in Nijmegen, the Netherlands. It was established on 17 October 1923 and is situated in the oldest city of the Netherlands. The RU has seven faculties and enrolls over 22,000 students. The university features many student associations which encourage participation in extracurricular activities.

The Netherlands, informally Holland for the original County of Holland, is a country in Northwestern Europe with some overseas territories in the Caribbean. In Europe, it consists of 12 provinces that border Germany to the east, Belgium to the south, and the North Sea to the northwest, with maritime borders in the North Sea with those countries and the United Kingdom. Together with three island territories in the Caribbean Sea—Bonaire, Sint Eustatius and Saba—it forms a constituent country of the Kingdom of the Netherlands. The official language is Dutch, but a secondary official language in the province of Friesland is West Frisian. In the northern parts of the country, Low Saxon is also spoken.

The IFCU is broken up into a number of regions of the world:

The Association of Catholic Colleges and Universities (ACCU) is a voluntary association of delegates from Catholic institutions of higher learning.

The Universidad Católica de la Santísima Concepción sometimes translated as "Catholic University of the Most Holy Conception", is a university in Chile. It is part of the Chilean Traditional Universities.

The Fédération Internationale de Hockey, commonly known by the acronym FIH, is the international governing body of field hockey and indoor field hockey. Its headquarters are in Lausanne, Switzerland and the president is Narinder Batra. FIH is responsible for field hockey's major international tournaments, notably the World Cup.

A film society is a membership-based club where people can watch screenings of films which would otherwise not be shown in mainstream cinemas. In Spain, Ireland and Italy, they are known as "cineclubs", and in Germany they are known as "filmclubs". They usually have an educational aim, introducing new audiences to different audiovisual works through an organized and prepared program of screenings.

The Universidad de La Salle is a catholic and lasallian university, founded in 1964. It is a private institution of higher education, having 4 locations: 3 in Bogotá DC- one in the downtown area, in Chapinero, and in the northern section of city. There is also a campus in El Yopal, Casanare in the East of the Country. This campus is the seat where the La Salle has developed the most innovative social and educational projects for young farmers, victims of violence in Colombia.

Assumption University is a private Catholic university with 4 campuses in different locations- Huamak near Rajamangala Stadium, City Campus located at Central World Plaza in downtown Bangkok, and Suvarnabhumi areas of Samut Prakan Province, and ACC School of Commerce, Thailand. The university is led by the Brothers of St. Gabriel congregation, which have been active in education in Thailand since 1901. The instruction language of the programs is English.

Hugh Gerard Connolly is an Irish Catholic priest. He is the current Aumônier des Irlandais at the Collège des Irlandais in Paris and formerly the president of St Patrick's College, Maynooth, Ireland.

SIGNIS is a Roman Catholic lay ecclesial movement for professionals in the communication media, including press, radio, television, cinema, video, media education, internet and new technology. It is a non-profit organization with representation from over 100 countries. It was formed in November 2001 by the merger of International Catholic Organization for Cinema and Audiovisual (OCIC) and International Catholic Association for Radio and Television (Unda). At its World Congress in Quebec in 2017, SIGNIS welcomed also former member organisations of the International Catholic Union of the Press (UCIP). 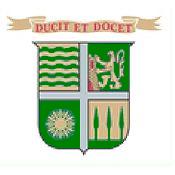 The Fédération internationale catholique d’éducation physique et sportive (FICEP) is an international nongovernmental organization (INGO) which governs all Catholic sports associations. The FICEP was founded between 1906 and 1911, under the auspices of the Italian federation FASCI, the Belgium federation FBCG, and the Fédération sportive et culturelle de France. Its development has mainly been confined to Europe, in spite of various and recurrent attempts to increase its geographical expansion after World War II.

The International University of Africa is a private university in Khartoum, Sudan. It is a member of the Federation of the Universities of the Islamic World. The university has faculties of Education and Humanities, Shariah and Islamic Studies, of Pure and Applied Sciences, Engineering and medicine.