Wm. B. Eerdmans Publishing Company is a religious publishing house based in Grand Rapids, Michigan. Founded in 1911 by William B. Eerdmans (1882–1966) and still independently owned with William's daughter-in-law Anita Eerdmans [2] as president, Eerdmans has long been known for publishing a wide range of Christian and religious books, from academic works in Christian theology, biblical studies, religious history, and reference to popular titles in spirituality, social and cultural criticism, and literature.

Eerdmans was born "Wiltje Eerdmans", the son of Dirkje Pars and the textile manufacturer Bernardus Dirk Eerdmans. He immigrated to the United States in 1902, heading for Grand Rapids, Michigan, a center of 19th-century Dutch immigration and Calvinism. In 1911 with his partner, Brant Sevensma, Eerdmans formed the Eerdmans–Sevensma book dealership, specializing in theological textbooks. In 1915, Sevensma left, and Eerdmans continued as sole owner of the renamed William B. Eerdmans Publishing Company.

After his death in 1966, he was succeeded by his son, William B. Eerdmans Jr.

Eerdmans Books for Young Readers began in 1995 as an imprint of Wm. B. Eerdmans Publishing Company, [4] specializing in quality fiction and non-fiction for younger readers, from babies to young adults.

The Book of Habakkuk is the eighth book of the 12 minor prophets of the Bible. It is attributed to the prophet Habakkuk, and was probably composed in the late 7th century BC.

Gordon Donald Fee is an American-Canadian Christian theologian and an ordained minister of the Assemblies of God (USA). He currently serves as Professor Emeritus of New Testament Studies at Regent College in Vancouver, British Columbia, Canada. 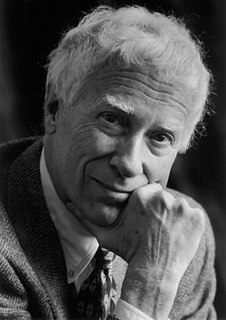 Nicholas Paul Wolterstorff is an American philosopher and a liturgical theologian. He is currently Noah Porter Professor Emeritus Philosophical Theology at Yale University. A prolific writer with wide-ranging philosophical and theological interests, he has written books on aesthetics, epistemology, political philosophy, philosophy of religion, metaphysics, and philosophy of education. In Faith and Rationality, Wolterstorff, Alvin Plantinga, and William Alston developed and expanded upon a view of religious epistemology that has come to be known as Reformed epistemology. He also helped to establish the journal Faith and Philosophy and the Society of Christian Philosophers.

James Douglas Grant Dunn, also known as Jimmy Dunn, is a British New Testament scholar, who was for many years the Lightfoot Professor of Divinity in the Department of Theology at the University of Durham, now Emeritus Lightfoot Professor. He has worked broadly within the Protestant tradition. 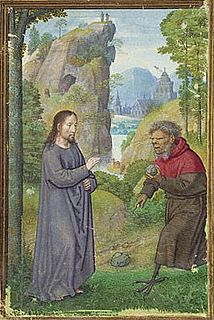 Matthew 4:3 is the third verse of the fourth chapter of the Gospel of Matthew in the New Testament. This verse opens the section in Matthew dealing with the temptation of Christ by Satan. Jesus has been fasting for forty days and forty nights and in this verse the devil gives Christ his first temptation and encourages him to use his powers to get food. 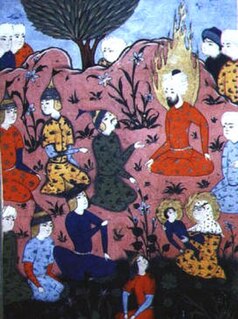 Matthew 5:1 and Matthew 5:2 are the first two verses of the fifth chapter of the Gospel of Matthew in the New Testament. The verses introduce the Sermon on the Mount that will be recited in the next several chapters. The previous verse mentioned the large crowds "from Galilee, and from the Decapolis, Jerusalem, Judea, and beyond the Jordan" who followed Jesus to witness him healing: these verses present Jesus as seeing the crowds and going up onto a mountain to begin teaching.

In Christian eschatology, the post-tribulation rapture doctrine is the belief in a combined resurrection and rapture of all believers coming after the Great Tribulation. 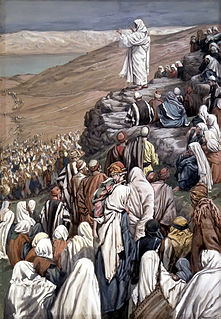 Matthew 5:29 is the twenty-ninth verse of the fifth chapter of the Gospel of Matthew in the New Testament and is part of the Sermon on the Mount. It is the third verse of the discussion of adultery. 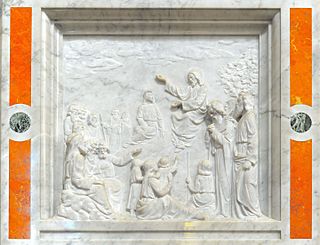 Matthew 5:31 is the thirty-first verse of the fifth chapter of the Gospel of Matthew in the New Testament and is part of the Sermon on the Mount. This verse opens the brief, but much scrutinized, discussion of the issue of divorce. 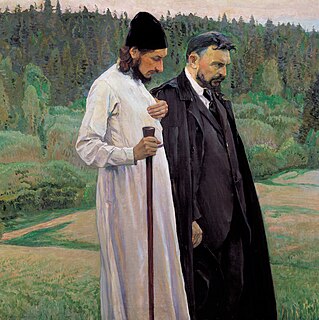 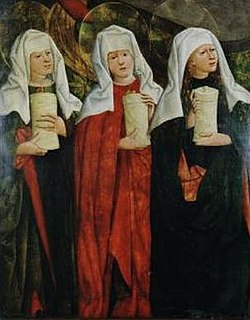 Matthew 28:1 is the first verse of the twenty-eighth chapter of the Gospel of Matthew in the New Testament. This verse opens the resurrection narrative as Mary Magdalene and "the other Mary" visit Jesus' tomb after the crucifixion. 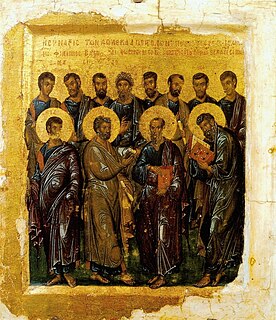 Matthew 10:1 is the first verse of the tenth chapter of the Gospel of Matthew in the New Testament. In this verse Jesus gathers his disciples and grants them healing powers in what is known as the commissioning the twelve apostles.

William T. Cavanaugh is an American Roman Catholic theologian, known for his work in political theology and Christian ethics.

Peter Thomas O'Brien is an Australian New Testament scholar. He has written commentaries on Ephesians, Philippians, Colossians, Philemon, and Hebrews.

John N. Oswalt is an American scholar and distinguished professor of Old Testament at Asbury Theological Seminary. He teaches in theology, Old Testament and ancient semitic languages including Hebrew. He is the author of 11 scholarly books; foremost is the 2-volume commentary on the Book of Isaiah in the New International Commentary on the Old Testament series. Exodus: The Way Out (2013) is a recent work. Oswalt adheres to single, unitary authorship of the Book of Isaiah. Numerous scholarly journals, biblical encyclopedias and academic religious periodicals have included articles by him.