Fourth Council of the Lateran

The Fourth Council of the Lateran or Lateran IV was convoked by Pope Innocent III in April 1213 and opened at the Lateran Palace in Rome on 11 November 1215. Due to the great length of time between the Council's convocation and its meeting, many bishops had the opportunity to attend this council, which is considered by the Roman Catholic Church to be the twelfth ecumenical council.

Innocent III first mooted organizing an ecumenical council in November 1199. [1] In his letter titled Vineam Domini, dated 19 April 1213, [2] the Pope writes of the urgent need to recover the Holy Land and reform the Church. [3] The letter, which also served as a summons to an ecumenical council, was included alongside the Pope's papal bull Quia maior . [1] In preparing for the council, the Pope spearheaded the extensive refurbishment of the old St. Peter's Basilica, which he designated as the "centrepiece for display and decoration" during the council. The lunette of the main door leading to the tomb of St. Peter had engravings of Old Testament prophets and twenty-four bishops, alongside the messages, "Feed your Sheep" and "This is the Door of the Sheep". [4]

Innocent III deliberately chose for the Fourth Council to meet in November, during which there were numerous feast days. [5] A preliminary legal session took place on 4 November, [6] while the opening ceremony of the council was held on St. Martin's Day and began with a private morning Mass. [5] Afterwards, at the start of the first plenary session in the Lateran Palace, the Pope led the singing of "Veni Creator Spiritus" [7] and preached about Jesus' words to his disciples at the Last Supper, [8] quoting from Luke 22. [9] In his next two sermons, one on the need to recover the Holy Land and the other on dealing with heretics, [10] the Pope was joined on stage by Raoul of Mérencourt and Thedisius of Agde respectively. [6]

On 14 November, there were violent scenes between the partisans of Simon de Montfort among the French bishops and those of the Count of Toulouse. Raymond VI of Toulouse, his son (afterwards Raymond VII), and Raymond-Roger of Foix attended the council to dispute the threatened confiscation of their territories; Bishop Foulques and Guy de Montfort (brother of Simon de Montfort) argued in favour of the confiscation. All of Raymond VI's lands were confiscated, save Provence, which was kept in trust to be restored to Raymond VII. [11] Pierre-Bermond of Sauve's claim to Toulouse was rejected and Toulouse was awarded to de Montfort, while the lordship of Melgueil was separated from Toulouse and entrusted to the bishops of Maguelonne. [11]

The next day, in a ceremony attended by many council participants, the Pope consecrated the Basilica of Santa Maria in Trastevere, [5] which had been rebuilt by Callixtus II. [12] Four days later, the anniversary celebration at St. Peter's Basilica brought together such a large gathering that the Pope himself had trouble entering the premises. [12]

The second plenary session was held on 20 November; the Pope was scheduled to preach about church reform, but proceedings were disrupted by bishops who opposed the designation of Frederick II as Holy Roman Emperor. [13] The council concluded on 30 November, Saint Andrew's Day, during which the Pope preached on the Nicene Creed and concluded his remarks by raising up a relic of the True Cross. [13] The archbishop of Mainz attempted to interrupt the speech, although he complied with the Pope's raising of his hand—a command to stay silent. [14]

Lateran IV had three objectives: crusading, Church reform, and combatting heresy. [15] The seventy-one Lateran canons, which were not debated, were only formally adopted on the last day of the council; [16] according to Anne J. Duggan, the "scholarly consensus" is that they were drafted by Innocent III himself. [17] They cover a range of themes including Church reform and elections, taxation, matrimony, tithing, simony, and Judaism. [18] After being recorded in the papal registers, the canons were quickly circulated in law schools. [19] Effective application of the decrees varied according to local conditions and customs. [20]

While the proceedings were not officially recorded, unlike in previous councils, evidence of the events have been found in various manuscripts by observers of the council. [61] The Chronica Majora by Matthew Paris contains a line drawing of one of the sessions at the council which his abbot William of St Albans had personally attended. [62] An extensive eyewitness account by an anonymous German cleric was copied into a manuscript that was published in 1964, in commemoration of the Second Vatican Council, and is now housed at the University of Giessen. [63]

Henry of Segusio likened the council to the "four great councils of antiquity". [64] Lateran IV is sometimes referred to as the "Great Council of the Lateran" due to the presence of 404 or 412 bishops (including 71 cardinals and archbishops) and over 800 abbots and priors representing some eighty ecclesiastical provinces, [17] [65] together with 23 Latin-speaking prelates from the Eastern Orthodox Church [64] and representatives of several monarchs, including Frederick II, Otto IV, the Latin Emperor of Constantinople, John, King of England, Andrew II of Hungary, Philip II of France, and the kings of Aragon, Cyprus, and Jerusalem. [64] This made it the largest ecumenical council between the Council of Chalcedon and the Second Vatican Council; [66] Anne J. Duggan writes that "it was the largest, most representative, and most influential council assembled under papal leadership before the end of the fourteenth century." [67] According to F. Donald Logan, "the Fourth Lateran Council was the most important general council of the church in the Middle Ages", [68] whose effects "were felt for centuries." [69]

An ecumenical council, also called general council, is a meeting of bishops and other church authorities to consider and rule on questions of Christian doctrine, administration, discipline, and other matters in which those entitled to vote are convoked from the whole world (oikoumene) and which secures the approbation of the whole Church.

The First Council of the Lateran was the 9th ecumenical council recognized by the Catholic Church. It was convoked by Pope Callixtus II in December 1122, immediately after the Concordat of Worms. The council sought to bring an end to the practice of the conferring of ecclesiastical benefices by people who were laymen, free the election of bishops and abbots from secular influence, clarify the separation of spiritual and temporal affairs, re-establish the principle that spiritual authority resides solely in the Church and abolish the claim of the Holy Roman Emperor to influence papal elections. 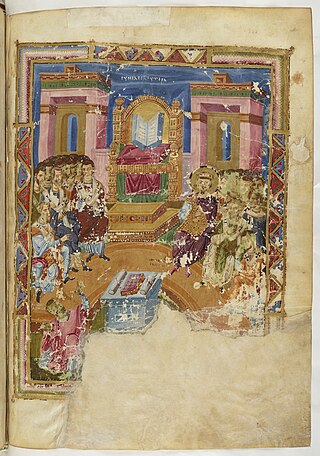 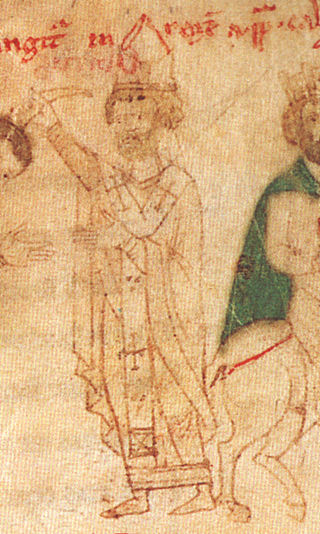 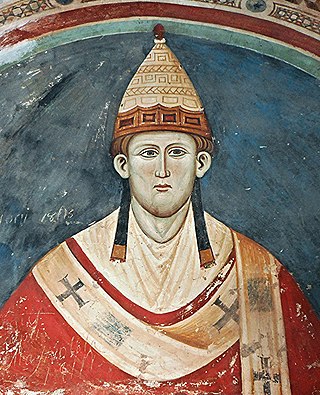 Pope Innocent III, born Lotario dei Conti di Segni, was the head of the Catholic Church and ruler of the Papal States from 8 January 1198 to his death in 16 July 1216.

The Third Council of the Lateran met in Rome in March 1179. Pope Alexander III presided and 302 bishops attended. The Catholic Church regards it as the eleventh ecumenical council. 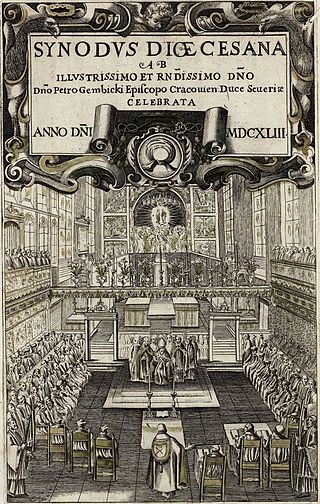 A synod is a council of a Christian denomination, usually convened to decide an issue of doctrine, administration or application. The word synod comes from the Greek: σύνοδος [ˈsinoðos] meaning "assembly" or "meeting" and is analogous with the Latin word concilium meaning "council". Originally, synods were meetings of bishops, and the word is still used in that sense in Catholicism, Oriental Orthodoxy and Eastern Orthodoxy. In modern usage, the word often refers to the governing body of a particular church, whether its members are meeting or not. It is also sometimes used to refer to a church that is governed by a synod.

The Second Council of the Lateran was the tenth ecumenical council recognized by the Catholic Church. It was convened by Pope Innocent II in April 1139 and attended by close to a thousand clerics. Its immediate task was to neutralise the after-effects of the schism which had arisen after the death of Pope Honorius II in 1130 and the papal election that year that established Pietro Pierleoni as the antipope Anacletus II.

The First Council of Lyon was the thirteenth ecumenical council, as numbered by the Catholic Church, taking place in 1245.

Clerical celibacy is the requirement in certain religions that some or all members of the clergy be unmarried. Clerical celibacy also requires abstention from deliberately indulging in sexual thoughts and behavior outside of marriage, because these impulses are regarded as sinful. 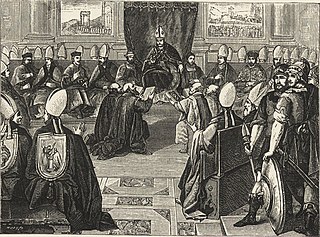 The Council of Vienne was the fifteenth ecumenical council of the Roman Catholic Church and met between 1311 and 1312 in Vienne, France. One of its principal acts was to withdraw papal support for the Knights Templar at the instigation of Philip IV of France. The Council, unable to decide on a course of action, tabled the discussion. In March 1312 Philip arrived and pressured the Council and Clement to act. Clement passed papal bulls dissolving the Templar Order, confiscating their lands, and labeling them heretics.

The Synod of Elvira was an ecclesiastical synod held at Elvira in the Roman province of Hispania Baetica, now Granada in southern Spain. Its date has not been exactly determined but is believed to be in the first quarter of the fourth century, approximately 305–6. It was one of three councils, together with the Synod of Arles (314) and the Synod of Ancyra, that first approached the character of general councils and prepared the way for the first ecumenical council. It was attended by nineteen bishops and twenty-six presbyters, mostly resident in Baetica. Deacons and laymen were also present. Eighty-one canons are recorded, although it is believed that many were added at later dates. All concern order, discipline and conduct among the Christian community. Canon 36, forbidding the use of images in churches, became a bone of contention between Catholic and Protestant scholars after the Protestant Reformation.

Ad abolendam was a decretal and bull of Pope Lucius III, written at Verona and issued 4 November 1184. It was issued after the Council of Verona settled some jurisdictional differences between the Papacy and Frederick I, Holy Roman Emperor. The document prescribes measures to uproot heresy and sparked the efforts which culminated in the Albigensian Crusade and the Inquisitions. Its chief aim was the complete abolition of Christian heresy.

According to the Catholic Church, a Church Council is ecumenical ("world-wide"), if it is "a solemn congregation of the Catholic bishops of the world at the invitation of the Pope to decide on matters of the Church with him".

The Council of Bourges was a Catholic council convened in November 1225 in Bourges, France; it was the second largest church assembly held in the West up to that time, exceeded in the numbers of prelates that attended only by the Fourth Lateran Council. Summoned by the cardinal-legate Romanus Bonaventura, it was attended by 112 archbishops and bishops, more than 500 abbots, many deans and archdeacons, and over 100 representatives of cathedral chapters.