Last updated January 12, 2022
Carthusian monks who were killed in the Reformation

The Carthusian martyrs are those members of the Carthusian monastic order who have been persecuted and killed because of their Christian faith and their adherence to the Catholic religion. As an enclosed order the Carthusians do not, on principle, put forward causes for their members, though causes have been promoted by others on their behalf.

The Carthusian order was founded in 1084 by St. Bruno of Cologne, and is an eremitic order, holding to the principle of withdrawal from the world to a life of silent contemplation and prayer. They are often viewed as hermits that live in common, having no active apostolate outside their Charterhouse. Carthusian life is dramatically different as compared to Benedictine Monasticism, the most prevalent form in the west. Today the Carthusians are a small order comprising 25 houses worldwide with just 350 male and 75 female members.

During the Hussite Revolution in Bohemia in the 15th century Carthusian houses, as with other Catholic institutions, came under attack. In 1419 the charterhouse in Prague was burned down. [1]

Dom Andreas, prior of Žiče Charterhouse, was captured during an Ottoman raid and martyred on March 3, 1529. [2] The Mauerbach Charterhouse on the outskirts of Vienna, Austria, was plundered and set on fire by Ottoman troops during the 1529 Siege of Vienna, and was again targeted by the Ottomans during the 1683 Battle of Vienna, though there seems no precise record of the names of monks killed in either assault.

In 1537 during the English Reformation the London Charterhouse was dissolved and its members imprisoned and later executed. Eighteen of these, the Carthusian Martyrs of London, were beatified in 1886 by Pope Leo XIII; [3] three of these (Augustine Webster, John Houghton and Robert Lawrence) were canonized in 1970 by Pope Paul VI with other English martyrs as the Forty Martyrs of England and Wales.

In 1572 during the Dutch Revolt the Charterhouses of Delft and Roermond were attacked, resulting in the deaths of Dom Justus van Schoonhoven and at least two others. [4]

During the French Revolution numerous Carthusians were persecuted with other Catholic religious and lay persons. Claude Beguignot and Lazarus Tiersot were ordained Carthusians. As priests, they were required to take the anti-Papal oath of the "Civil Constitution of the Clergy". At their refusal they were imprisoned along with eight other Carthusians in former slave ships anchored in the Charente River at Rochefort. Like most of 800 priests and clergy confined there, they died in 1794 due to the inhumane conditions. [5] They were beatified by Pope John Paul II in 1995. [6]

In 1936, during the Spanish Civil War, Carthusians were affected by the widespread anti-clericalism; two of these, from the Charterhouse of Montalegre, have so far been recognized.

In September 1944, monks from the charterhouse at Certosa di Farneta opened their doors to troops from the 16th SS Panzergrenadier Division, who said they came bearing gifts for the abbey. They broke into the monastery to arrest 32 partisans and Jews being sheltered in the monastery. Some of the refugees were able to escape. Of the more than sixty killed, twelve were Carthusians. [7] Among the twelve Carthusians killed were two Germans, one Swiss, one Venezuelan, and one Spaniard. The remaining monks were also from diverse countries. Those killed were:

The Forty Martyrs of England and Wales are a group of Catholic, lay and religious, men and women, executed between 1535 and 1679 for treason and related offences under various laws enacted by Parliament during the English Reformation. The individuals listed range from Carthusian monks who in 1535 declined to accept Henry VIII's Act of Supremacy, to seminary priests who were caught up in the alleged Popish Plot against Charles II in 1679. Many were sentenced to death at show trials, or with no trial at all. 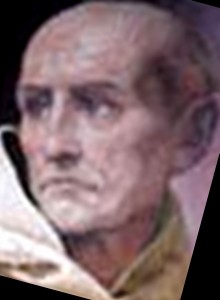 Augustine Webster was an English Catholic martyr. He was the prior of Our Lady of Melwood, a Carthusian house at Epworth, on the Isle of Axholme, in north Lincolnshire, in 1531. His feast day is 4 May.

John Houghton was a Carthusian hermit and Catholic priest and the first English Catholic martyr to die as a result of the Act of Supremacy by King Henry VIII of England. He was also the first member of his order to die as a martyr. He is among the Forty Martyrs of England and Wales.

Thomas Johnson, O.Cart., was a Carthusian hermit who was executed by starvation in Tudor England. He is venerated as a martyr and has been beatified by the Catholic Church.

John Rochester was an English Catholic priest, Carthusian monk and martyr. He was hanged at York for refusing to concede King Henry VIII's supremacy over the church.

William Exmew was an English Catholic priest and Carthusian hermit. He was hanged, drawn, and quartered at Tyburn and is honored as a martyr by the Catholic Church. Exmew and his brother Carthusian martyrs were beatified by Pope Leo XIII on 9 December 1886.

Humphrey Middlemore, was an English Catholic priest and Carthusian hermit, who was executed for treason during the Tudor period. He is considered a martyr by the Catholic Church, and, along with other members of his religious order to meet that fate, was beatified by Pope Leo XIII on 9 December 1886.

Sebastian Newdigate, was the seventh child of John Newdigate, Sergeant-at-law. He spent his early life at court, and later became a Carthusian monk. He was executed for treason on 19 June 1535 for his refusal to accept Henry VIII's assumption of supremacy over the Church in England. His death was considered a martyrdom, and he was beatified by the Catholic Church. 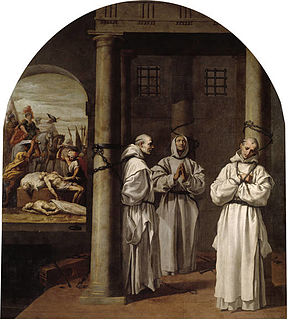 Robert Lawrence was one of the Forty Martyrs of England and Wales. He was hanged, drawn, and quartered at Tyburn for declining to sign the Oath of Supremacy. His feast day is 4 May.

The Martyrs of the Spanish Civil War are the Catholic Church's term for the people killed by Republicans during the Spanish Civil War for their faith. More than 6,800 clergy and religious were killed in the Red Terror. As of October 2021, 2,050 Spanish martyrs have been beatified; 11 of them being canonized. For some 2,000 additional martyrs, the beatification process is underway.

The 498 Spanish Martyrs were victims of the Spanish Civil War beatified by the Roman Catholic Church in October 2007 by Pope Benedict XVI. It was the greatest numbers of persons ever beatified at once up to that time in the Church's history. They originated from many parts of Spain. Their ages ranged from 16 years to 78 years old. Although almost 500 persons, they are a small part of the Martyrs of the Spanish Civil War. 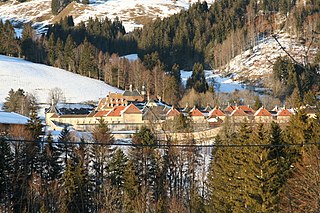 La Valsainte Charterhouse or La Valsainte situated in La Valsainte in the district of Gruyère, Canton of Fribourg, is the only remaining extant Carthusian monastery in Switzerland.

Dom Bede Camm, O.S.B., was an English Benedictine monk and martyrologist. He is best known for his many works on the English Catholic martyrs, which helped to keep their memories alive in the newly reemerging Catholic Church of Victorian England.

The 233 Spanish Martyrs, also referred to as The Martyrs of Valencia or Jose Aparico Sanz and 232 Companions, were a group of martyrs from the Spanish Civil War, who were beatified in March 2001 by Pope John Paul II. This was the largest number of persons beatified at once up to that time. They originated from all parts of Spain but mostly served and died in the diocese of Valencia. 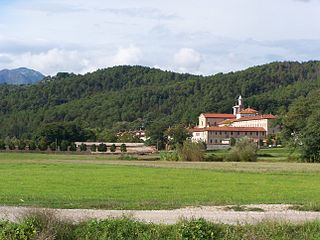 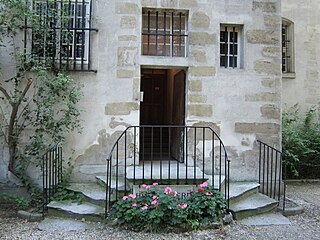 Blessed André Grasset de Saint-Sauveur, usually known simply as André Grasset, was a Canadian-born French Catholic priest who was martyred for his faith in Paris during the French Revolution. In 1926 he became the first Canadian-born person to be beatified.