Caius, Presbyter of Rome (also known as Gaius) was a Christian author who lived and wrote towards the beginning of the 3rd century. [1] Only fragments of his works are known, which are given in the collection entitled The Ante-Nicene Fathers. However, the Muratorian fragment, an early attempt to establish the canon of the New Testament, is often attributed to Caius and is included in that collection. [2]

For the existing fragments from Caius' "Dialogue or Disputation Against Proclus," we are indebted to Eusebius, who included them in his Ecclesiastical History . [1] In one of these fragments, Caius tells Proclus,

This is described by the Catholic Encyclopedia as "a very valuable evidence of the death of Sts. Peter and Paul at Rome, and the public veneration of their remains at Rome about the year 200." [1]

There is also another series of fragments Eusebius gives from a work called "Against the Heresy of Artemon," although the Ante-Nicene Fathers note says regarding the authorship only that it is "an anonymous work ascribed by some to Caius." [4]

Caius was also one of the authors to whom the "Discourse to the Greeks concerning Hades" was ascribed at one time. [5] (It was also attributed, much more famously, to Josephus and still appears in editions of the William Whiston translation of his collected works, but is now known to be excerpted from a work by Hippolytus of Rome.) [6]

Arianism is a Christological doctrine first attributed to Arius, a Christian presbyter in Alexandria, Egypt. Arian theology holds that the Son of God is not co-eternal with God the Father and is distinct from the Father. However, as in mainstream Trinitarianism, Arianism holds that Jesus Christ is the Son of God, who was begotten by God the Father. 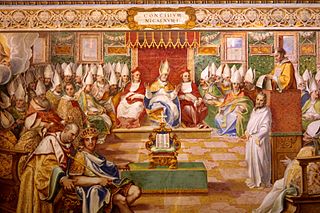 Polycarp was a Christian bishop of Smyrna. According to the Martyrdom of Polycarp, he died a martyr, bound and burned at the stake, then stabbed when the fire failed to consume his body. Polycarp is regarded as a saint and Church Father in the Eastern Orthodox, Oriental Orthodox, Catholic, Anglican and Lutheran churches. His name means "much fruit" in Greek. Both Irenaeus and Tertullian record that Polycarp had been a disciple of John the Apostle, one of Jesus’ disciples. In On Illustrious Men, Jerome writes that Polycarp was a disciple of John the Apostle and that John had ordained him as a bishop of Smyrna. Polycarp is regarded as one of three chief Apostolic Fathers, along with Clement of Rome and Ignatius of Antioch.

In Christianity, Sabellianism is the western Church heresy equivalent to the eastern historic Patripassianism, which are both forms of theological modalism. Sabellianism is the belief that the Father, Son, and Holy Spirit are three different modes or aspects of God, as opposed to a Trinitarian view of three distinct persons or hypostases within the Godhead. The term Sabellianism comes from Sabellius, who was a theologian and priest from the 3rd century. None of his writings have survived and so all that is known about him comes from his opponents. All evidence shows that Sabellius held Jesus to be deity while denying the plurality of persons in God and holding a belief similar to modalistic monarchianism. Modalistic monarchianism has been generally understood to have arisen during the second and third centuries, and to have been regarded as heresy after the fourth, although this is disputed by some.

A Select Library of the Nicene and Post-Nicene Fathers of the Christian Church, usually known as the Nicene and Post-Nicene Fathers (NPNF), is a set of books containing translations of early Christian writings into English. It was published between 1886 and 1900. Unlike the Ante-Nicene Fathers which was produced by using earlier translations of the Ante-Nicene Christian Library (ANCL), the Nicene and Post-Nicene Fathers was printed simultaneously in Europe and in America, by T. & T. Clark, by Christian Literature Company and other American editors. The translations were in the main revised versions of those made for the Oxford Movement Library of the Fathers series. T. & T. Clark was surely convinced by the commercial success of the cheaper American version/revision of the ANCL, although of lesser quality on some minor points. An American, Philip Schaff, was commissioned to supervise the first series of the NPNF. He was joined by the British Henry Wace for the second series.

Pope Clement I, also known as Saint Clement of Rome, is listed by Irenaeus and Tertullian as the fourth bishop of Rome, holding office from 88 to his death in 99. He is considered to be the first Apostolic Father of the Church, one of the three chief ones together with Polycarp and Ignatius of Antioch. 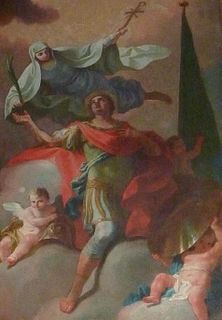 Paul of Samosata was Bishop of Antioch from 260 to 268 and the originator of the Paulianist heresy named after him. He was a believer in monarchianism, a nontrinitarian doctrine; his teachings reflect adoptionism.

Cerinthus was an early Gnostic, who was prominent as a heresiarch in the view of the early Church Fathers. Contrary to the Church Fathers, he used the Gospel of Cerinthus, and denied that the Supreme God made the physical world. In Cerinthus' interpretation, the Christ descended upon Jesus at baptism and guided him in ministry and the performing of miracles, but left him at the crucifixion. Similarly to the Ebionites, he maintained that Jesus was not born of a virgin, but was a mere man, the biological son of Mary and Joseph.

The Alogi or Alogoi were a group of heterodox Christians in Asia Minor that flourished c. 200 CE, and taught that the Gospel of John and the Apocalypse of John were not the work of the Apostle, but his adversary Cerinthus. What we know of them is derived from their doctrinal opponents, whose literature is extant, particularly St. Epiphanius of Salamis. It was Epiphanius who coined the name "Alogi" as a word play suggesting that they were both illogical (anti-logikos) and they were against the Christian doctrine of the Logos. While Epiphanius does not specifically indicate the name of its founder, Dionysius Bar-Salibi, citing a lost work of Hippolytus, writes in his commentary on the Apocalypse,

Hippolytus the Roman says: A man appeared, named Caius, saying that the Gospel is not by John, nor the Apocalypse but that it is by Cerinthus the heretic.

John the Presbyter was an obscure figure of the early Church who is either distinguished from or identified with the Apostle John and/or John of Patmos. He appears in fragments from the church father Papias of Hierapolis as one of the author's sources and is first unequivocally distinguished from the Apostle by Eusebius of Caesarea. He is frequently proposed by some as an alternative author of some or all of the Johannine books in the New Testament. 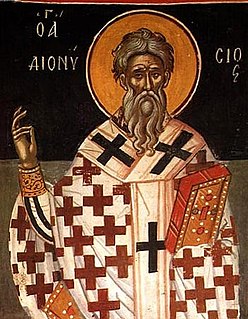 Artemon, a prominent Christian teacher in Rome, who held Adoptionist, or Nontrinitarian views. We know little about his life for certain.

Discourse to the Greeks concerning Hades is a short treatise believed to be the work of Hippolytus of Rome.

Subordinationism is a belief that began within early Christianity that asserts that the Son and the Holy Spirit are subordinate to God the Father in nature and being. Various forms of subordinationism were believed or condemned until the mid-4th century, when the debate was decided against subordinationism as an element of the Arian controversy. In 381, after many decades of formulating the doctrine of the Trinity, the First Council of Constantinople condemned Arianism.

Apsethus the Libyan was an occultist. Despite repeated intrigues, he failed to become god. Multiple accounts mentioned his mystic and occult skills.

Archelaus was the bishop of Carrhae.