The ecclesiastical title of archpriest or archpresbyter belongs to certain priests with supervisory duties over a number of parishes. The term is most often used in Eastern Orthodoxy and the Eastern Catholic Churches and may be somewhat analogous to a monsignor in the Latin Church, but in the Eastern churches an archpriest wears an additional vestment and, typically, a pectoral cross, and becomes an archpriest via a liturgical ceremony.

The term may be used in the Latin Catholic Church in certain historical titles and may replace in popular usage the title of vicar forane, otherwise often known as a dean.

In ancient times, the archdeacon was the head of the deacons of a diocese, as is still the case in the Eastern Orthodox Church, while the archpriest was the chief of the presbyerate of the diocese, i.e. of the priests as a body. The latter's duties included deputising for the bishop in spiritual matters when necessary.

In the western Church, by the Middle Ages, the use of the title had evolved and became assigned to the priest of the principal parish among several local parishes. This priest had general charge of worship in this archpresbyterate, and the parishioners of the smaller parishes had to attend Sunday Mass and hold baptisms at the principal parish while the subordinate parishes instead held daily mass and homilies.

By the time of the Council of Trent the office of archpriest was replaced by the office of vicar forane, also known in English as "dean". The first recorded use of this meaning of the title comes from St Charles Borromeo's reforms in his own diocese. Unlike vicars general and vicars episcopal, vicars forane are not prelates, which means they do not possess ordinary power. Their role is entirely supervisory, and they perform visitations for the bishop and report to the bishop or vicar general any problems in their territory.

Exceptionally, the pope on occasion raised a territory to the rank of archipresbyterate nullius, detached from any prelature, yet under a non-prelate, as happened in 1471 with the future abbacy (1583) and later (1828-1986) Diocese of Guastalla.

In the 16th and 17th centuries, during the persecution of Catholics in England, an archpriest was appointed by the Holy See as head of the Catholic Church in England, with authority over all of the secular clergy in the country. [1]

The title of archpriest has survived in Rome, in Malta and elsewhere, where it is now held by the rectors of the principal basilicas. However, the title is entirely honorary, reflecting the fact that these churches held archpriestly status in the past.

In Rome today, there are four archpriests, one for each of the four papal major basilicas; all of them are presently bishops :

The use of "archpriest" in the Latin Catholic Church should not be confused with "protopriest", the senior Cardinal-Priest in the College of Cardinals.

According to the specific historical tradition, many churches throughout the world, other than basilicas, are under the authority of a priest who bears the title of archpriest. However, the title is mostly honorary and today, such an archpriest has no control over subordinate clergy other than that of a parish priest over junior clergy assigned to assist him in meeting pastoral needs.

In the Latin Catholic Church, it was traditional in some localities for a priest to be assisted at his First Mass by another priest termed for the occasion the archpriest, who functioned as the deacon otherwise does. This was not a permanent title but referred only to the particular occasion.

In the Church of England there is at least one archpriest, the Archpriest of Haccombe. The title is a survival of local practice of Latin Catholic Church prior to the Reformation. It was first employed in AD 1315 and has been held ever since. It was confirmed by an order in council on 1 April 1913 under King George V. [2] The title reflects the fact that the archpriest has the right to sit beside the bishop and acknowledges no authority below that of the Archbishop of Canterbury, although today it is more appropriate to go through the usual channels of the church's hierarchy. Haccombe is a village in Devon, near Newton Abbot, where the parish is combined with that of Stoke-in-Teignhead with Combe-in-Teignhead. There is an hereditary patron for the Church of St Blaise, Haccombe. The modern office most closely resembling that of archpriest is the role of rural dean (rural dioceses) or area dean (urban dioceses). Like the archpriest of old, these officers have supervisory duties, but not ordinary jurisdiction, and are entitled to carry out visitations of subordinate parishes when so commissioned. With this in mind, although the Archpriest of Haccombe holds a unique role in the Church of England, it is considered analogous with certain incumbencies which bear the title "Dean" regardless of whether or not their incumbent is the actual rural or area dean. One example of this historical oddity is the office of Dean of Bocking in Essex.[ citation needed ] The current Archpriest of St Blaise, Haccombe is the current incumbent, the Reverend Annie Church, the first female priest to hold this office in Haccombe.

Archpriest, also protopope (Greek : πρωτοπαπᾶς, protopapas) or protopresbyter (Greek : πρωτοπρεσβύτερος, protopresbyteros), is a clerical rank, a title of honor given to non-monastic priests [3] [note 1] and is conferred by a bishop with the laying on of hands and prayer. [4] An archpriest typically wears an epigonation, a vestment originally worn only by bishops; however, details vary locally, and in some places being given the epigonation is an honor that typically precedes being made an archpriest and in other places, it is an honor that is given to only some archpriests. [note 2] An archpriest also wears a pectoral cross both as part of his street clothes and when vested. [note 3] The ceremony for making an archpriest is analogous to other clerical promotions bestowed with cheirothesia: at the little entrance of the divine liturgy, the candidate is conducted to the ambo in the middle of the church where the bishop is at the time, and the bishop blesses him and says a prayer [4] addressed to Christ asking to "... endue our brother (name) with Thy Grace, and adorn him with virtue to stand at the head of the Presbyters of Thy people, and make him to be a good example to them that are with him ..." [5]

In the Russian tradition, protopresbyter is a higher rank than archpriest, as explained in a translation by the Orthodox Church in America:

The Unitarian Church of Transylvania is divided into five Archpriestships as a form of territorial governance, [6] virtual dioceses. 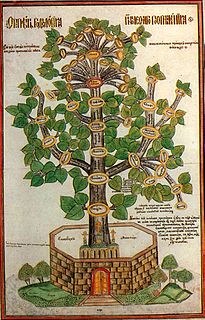 Hegumen, hegumenos, or igumen is the title for the head of a monastery in the Eastern Orthodox and Eastern Catholic Churches, similar to the title of abbot. The head of a convent of nuns is called a hegumenia or ihumenia. The term means "the one who is in charge", "the leader" in Greek. 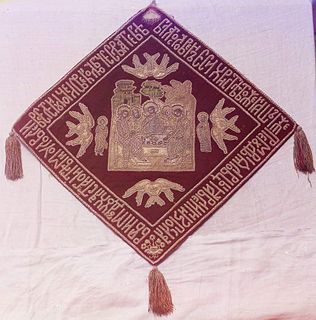 The epigonation, or palitza, is a vestment used in some Eastern Christian churches.

A nabedrennik is a vestment worn by some Russian Orthodox priests. It is a square or rectangular cloth. Like the epigonation, is worn at the right hip, suspended from a strap attached to the two upper corners of the vestment and drawn over the left shoulder; however, if the priest also wears an epigonation, then the nabedrennik is worn at the left hip, drawn over the right shoulder.

A dean, in a church context, is a cleric holding certain positions of authority within a religious hierarchy. The title is used mainly in the Anglican Communion, the Roman Catholic Church, and many Lutheran denominations. A dean's assistant is called a subdean.

A protopope, or protopresbyter, is a priest of higher rank in the Eastern Orthodox and the Byzantine Catholic Churches, generally corresponding to Western Christianity's archpriest or the Latin Church's dean.

Meletie Covaci was an ethnic Romanian Catholic bishop in the Habsburg Monarchy.

Archbishop Dositheus was a bishop of the Russian Orthodox Church, bishop of Brooklyn.