The territorial prelate is sometimes called a prelate nullius, from the Latin nullius diœceseos, prelate "of no diocese," meaning the territory falls directly under the 'exempt' jurisdiction of the Holy See (Pope of Rome) and is not a diocese under a residing bishop.

The Holy See, also called the See of Rome, refers to the jurisdiction of the Bishop of Rome, known as the pope, which includes the apostolic episcopal see of the Diocese of Rome, and the universal ecclesiastical jurisdiction of the worldwide Catholic Church. Founded in the 1st century by Saints Peter and Paul, by virtue of Petrine and papal primacy according to Catholic tradition, it is the focal point of full communion for Catholics around the world. As a sovereign entity of international law representing papal jurisdiction, the Holy See is headquartered in, operates from, and exercises "exclusive dominion" over the independent Vatican City State enclave in Rome, Italy, of which the pope is sovereign. It is organized into polities of the Latin Church and the 23 Eastern Catholic Churches, and their dioceses and religious institutes.

The term is also used in a generic sense, and may then equally refer to an apostolic prefecture, an apostolic vicariate, a permanent apostolic administration (which are pre-diocesan, often missionary, or temporary), or a territorial abbacy (see there).

An apostolic vicariate is a territorial jurisdiction of the Roman Catholic Church under a titular bishop centered in missionary regions and countries where dioceses or parishes have not yet been established. It is essentially provisional, though it may last for a century or more. The hope is that the region will generate sufficient numbers of Catholics for the Church to create a diocese. In turn, the status of apostolic vicariate is often a promotion for a former apostolic prefecture, while either may have started out as a mission sui iuris.

A territorial prelate exercises quasi-episcopal jurisdiction in a territory not comprised by any diocese. The origin of such prelates must necessarily be sought in the apostolic privileges, for only he whose authority is superior to that of bishops can grant an exemption from episcopal jurisdiction. Such exemption, therefore, comes only from the pope. [1]

The rights of prelates nullius are quasi-episcopal, and these dignitaries are supposed to have any power that a bishop has, unless it is expressly denied to them by canon law. If they have not received episcopal consecration, such prelates may not confer holy orders. If not consecrated episcopally, they have not the power to exercise those functions of consecrating oils, etc., which are referred to the episcopal order only analogously. [1] 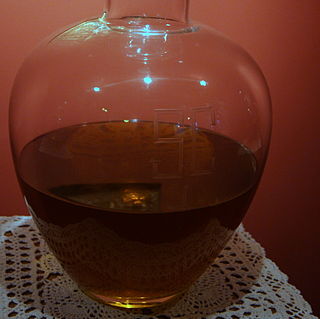 Prelates nullius may take cognizance of matrimonial causes within the same limits as a bishop. They may dispense from the proclamation of matrimonial banns, grant faculties for hearing confessions and preaching, reserve certain cases to themselves, publish indulgences and jubilees, exercise full jurisdiction over the enclosure of nuns, and invite any bishop to confirm in their quasi-diocese. [1] They may, even if priests only, confirm themselves by papal privilege as expressed in canon 883 No. 1 CIC whenever they find it appropriate; however, even as local ordinaries they are in that case only extraordinary ministers of confirmation and should thus prefer to invite bishops if possible.

The banns of marriage, commonly known simply as the "banns" or "bans" /bænz/, are the public announcement in a Christian parish church or in the town council of an impending marriage between two specified persons. It is commonly associated with the Catholic Church and the Church of England and with other denominations whose traditions are similar; in 1983, the Roman Catholic Church removed the requirement for banns and left it to individual national bishops' conferences to decide whether to continue this practice, but in most Catholic countries the banns are still published. 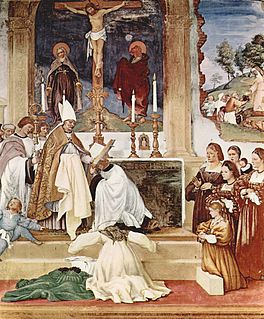 In the teaching of the Roman Catholic Church, an indulgence is "a way to reduce the amount of punishment one has to undergo for sins". It may reduce the "temporal punishment for sin" after death, in the state or process of purification called Purgatory.

These prelates may not, however, without special permission of the Holy See, convoke a synod or institute synodal examiners. Neither may they confer parochial benefices. They are not allowed to grant indulgences, or absolve from the reserved cases and secret irregularities whose absolution is restricted to the pope ordinarily, but allowed to bishops by the Council of Trent, nor promote secular clerics to orders, nor grant dimissory letters for ordination, nor exercise jurisdiction over regulars as apostolic delegates. [1]

Prelates nullius are, however, bound to residence, to preach the Word of God, to offer Mass for their people, to make the visit ad limina to the Roman Curia, and in concurrence with the neighbouring bishop to perform a visitation of their quasi-diocese. [1]

As a rule, territorial (and personal) prelates are consecrated as bishops, though not bishops of their diocese, as expressed by the title Bishop-prelate.

Most were/are missionaries, outside Europe (mainly Latin America and a few Asian countries) or in countries with a crushing Protestant majority (notably Lutheran Norway).

(probably quite incomplete; all Latin)

The Territorial Prelature of Batanes is a Latin rite pre-diocesan, non-missionary jurisdiction of the Roman Catholic Church. It is a suffragan in the ecclesiastical province of the Metropolitan Roman Catholic Archdiocese of Tuguegarao on Luzon island in the Philippines.

The diocese of Gravina and Montepeloso is a former ecclesiastical territory of the Roman Catholic Church in Apulia, southern Italy. Since 1986 it has formed part of the merged diocese of Altamura-Gravina-Acquaviva. Gravina in Apulia was the seat of the episcopal see from the ninth century.

Purus and Purús may refer to the following : 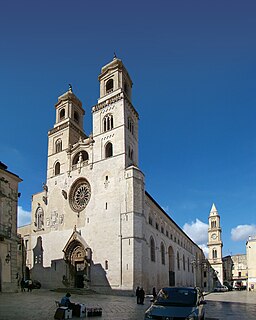 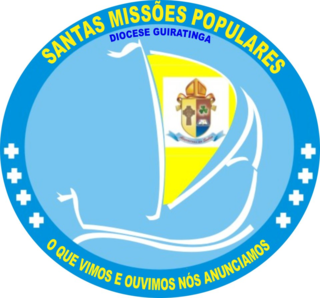 The Diocese of Guiratinga was a former ecclesiastical circumscription of the Catholic Church in Brazil, belonging to the Ecclesiastical Province of Cuiabá and the West II Regional Bishops' Council of the National Conference of Bishops of Brazil, being a suffragan of the Archdiocese of Cuiabá. The episcopal see is the Cathedral St. John the Baptist in the city of Guiratinga in the state of Mato Grosso.

The Roman Catholic Diocese of Roraima is a diocese located in the state of Roraima in the Ecclesiastical province of Manaus in Brazil.

The Diocese of Primavera do Leste–Paranatinga is a Latin suffragan Roman Catholic Diocese in the state of Mato Grosso, in the Ecclesiastical province of the metropolitan Archbishop of Cuiabá in Brazil.

The Territorial Prelature of São Félix is a Roman Catholic territorial prelature in the Brazilian state of Mato Grosso.

The Roman Catholic Diocese of Rio Branco is a Latin suffragan see in the ecclesiastical province of the Metropolitan Archbishop of Porto Velho (Rondônia), in the upper Amazon River basin).

The Territorial Prelature of Bananal was a short-lived (1924-1956) Latin Catholic pseudo-diocesan jurisdiction in Brazil.

Carlo Caputo was a Roman Catholic priest. He was diocesan bishop of Monopoli and Aversa, then titular bishop of Nikomedia and from 1904 to 1907 apostolic nuncio to the Kingdom of Bavaria.