Last updated September 25, 2019
Not to be confused with Protopresbyter.

This title is always attached to the most senior Cardinal Priest according to date of his creation. From the 17th century until the end of the 19th century, the Protopriest was usually assigned to the Titular church of San Lorenzo in Lucina. [1]

A titular church or titulus is a church in Rome assigned or assignable to one of the cardinals, or more specifically to a cardinal priest.

The protopriest has the honor of pronouncing the formal prayer for the new pope at the papal inauguration after the protodeacon (most senior Cardinal deacon) bestows the pallium and before the Dean of the College of Cardinals (most senior Cardinal-bishop) presents the Ring of the Fisherman. This last happened at the inauguration of Pope Benedict XVI in 2005, [2] but did not happen at the inauguration of Pope Francis in 2013 because the protopriest, Cardinal Paulo Evaristo Arns, then 91 years old, remained in São Paulo, Brazil, and did not attend. [3] [4] [5] [lower-alpha 1]

The pallium is an ecclesiastical vestment in the Roman Catholic Church, originally peculiar to the Pope, but for many centuries bestowed by the Holy See upon metropolitans and primates as a symbol of their conferred jurisdictional authorities, and still remains papal emblems. Schoenig, Steven A., SJ. Bonds of Wool: The Pallium and Papal Power in the Middle Ages (Washington, DC: The Catholic University of America Press, 2017. ISBN 978-0-8132-2922-5. In its present form, the pallium is a long and "three fingers broad" white band adornment, woven from the wool of lambs raised by Trappist monks. It is donned by looping its middle around one's neck, resting upon the chasuble and two dependent lappets over one's shoulders with tail-ends on the left with the front end crossing over the rear. When observed from the front or rear the pallium sports a stylistic letter 'y'. It is decorated with six black crosses, one near each end and four spaced out around the neck loop. At times the pallium is embellished fore and aft with three gold gem-headed stickpins. The doubling and pinning on the left shoulder likely survive from the Roman pallium. The pallium and the omophor originate from the same vestment, the latter a much larger and wider version worn by Eastern Orthodox and Eastern Catholic bishops of the Byzantine Rite. A theory relates origination to the paradigm of the Good Shepherd shouldering a lamb, a common early Christian art image — but this may be an explanation a posteriori, however the ritual preparation of the pallium and its subsequent bestowal upon a pope at coronation suggests the shepherd symbolism. The lambs whose fleeces are destined for pallia are solemnly presented at altar by the nuns of the convent of Saint Agnes and ultimately the Benedictine nuns of Santa Cecilia in Trastevere weave their wool into pallia.

Cardinal Michael Michai Kitbunchu of Bangkok has been the protopriest since 14 December 2016. 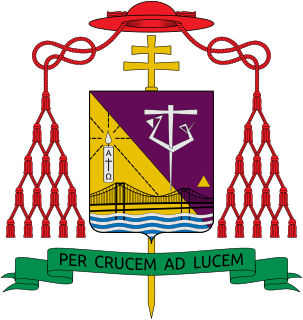 Michael Michai Kitbunchu is a Thai prelate of the Roman Catholic Church. He served as Archbishop of Bangkok from 1973 to 2009 and was elevated to the cardinalate in 1983. He has been the Protopriest of the College of Cardinals since 14 December 2016. 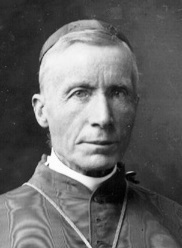 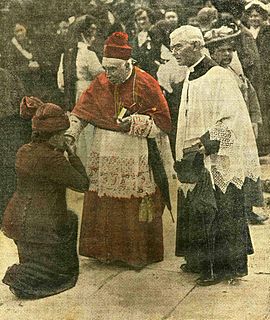 Michael Logue was an Irish prelate of the Roman Catholic Church. He served as Archbishop of Armagh and Primate of All Ireland from 1887 until his death in 1924. He was created a cardinal in 1893. 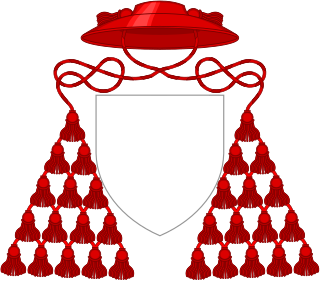 A cardinal is a leading bishop and prince of College of Cardinals in the Catholic Church. Their duties include participating in Papal consistories, and Papal conclaves, when the Holy See is vacant. Most have additional missions, such as leading a diocese or a dicastery of the Roman Curia, the equivalent of a government of the Holy See. During the sede vacante, the day-to-day governance of the Holy See is in the hands of the College of Cardinals. The right to enter the Papal conclave of cardinals where the pope is elected is limited to those who have not reached the age of 80 years by the day the vacancy occurs.

Angelo Raffaele Sodano, GCC is an Italian prelate of the Catholic Church, a Cardinal since 1991, who has served as Dean of the College of Cardinals since 2005. He was Cardinal Secretary of State from 1991 to 2006. In 2005, he was elected Dean of the College of Cardinals. Sodano was the first person since 1828 to serve simultaneously as Dean and Secretary of State.

Giovanni Battista Re is an Italian Cardinal of the Roman Catholic Church whose service has been primarily in the Roman Curia. He was elevated to the rank of cardinal in 2001. He is the Prefect emeritus of the Congregation for Bishops, having retired on 30 June 2010. As the senior Cardinal-Bishop to attend the March 2013 conclave to elect Pope Benedict XVI's successor, he chaired the conclave. Pope Francis approved his election as Sub-Dean of the College of Cardinals on 10 June 2017. 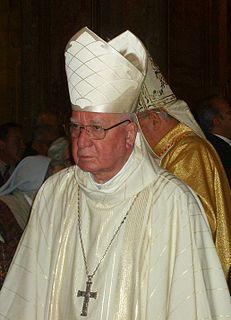 Jorge Arturo Agustín Medina Estévez is a Chilean Cardinal of the Roman Catholic Church. He was Cardinal Protodeacon until 23 February 2007. He was Prefect of the Congregation for Divine Worship and the Discipline of the Sacraments from 1996 to 2002. 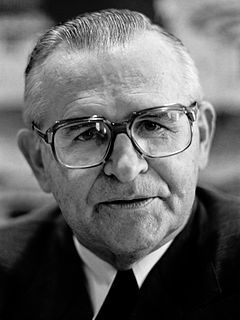 Paulo Evaristo Arns OFM was a Brazilian prelate of the Roman Catholic Church, who was made a Cardinal and the Archbishop of São Paulo by Pope Paul VI, and later became Cardinal Protopriest of the Roman Catholic Church. His ministry began with a quiet twenty-year academic career, but when charged with responsibility for the Sao Paulo Archdiocese he proved a relentless opponent of Brazil's military dictatorship and its use of torture as well as an advocate for the poor and a vocal defender of liberation theology. In his later years he openly criticized the way Pope John Paul II governed the Catholic Church through the Roman Curia and questioned his teaching on priestly celibacy and other issues.

Giulio Gabrielli was an Italian Catholic Church's cardinal. He spent most of his career in the Roman Curia. 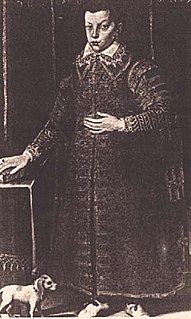 Carlo de' Medici was the son of Ferdinando I de' Medici, Grand Duke of Tuscany and Christina of Lorraine. 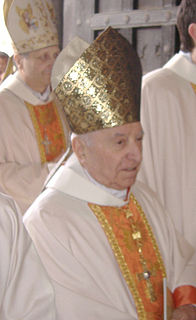 Luigi Poggi was an Italian cardinal of the Roman Catholic Church. Cardinal Poggi was a close confidant of Pope John Paul II, and acted as his secret emissary to Warsaw, Moscow and Washington. He was appointed by the Pope as head of the Vatican Secret Archives and the Vatican Library. 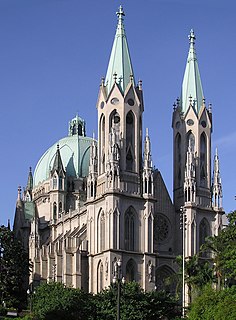 The Archdiocese of São Paulo is a Latin Metropolitan Archbishopric of the Roman Catholic Church in Brazil. 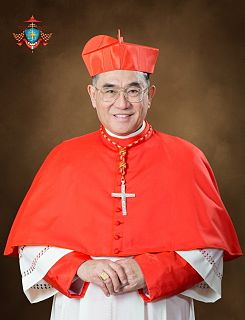 Filippo de Angelis was an Italian Cardinal of the Roman Catholic Church who served as both Archbishop of Fermo from 1842 and Camerlengo from 1867 until his death. Angelis was elevated to the cardinalate in 1839.

The papal conclave of 1534 was convened after the death of Pope Clement VII, and elected as his successor cardinal Alessandro Farnese, who became Pope Paul III. 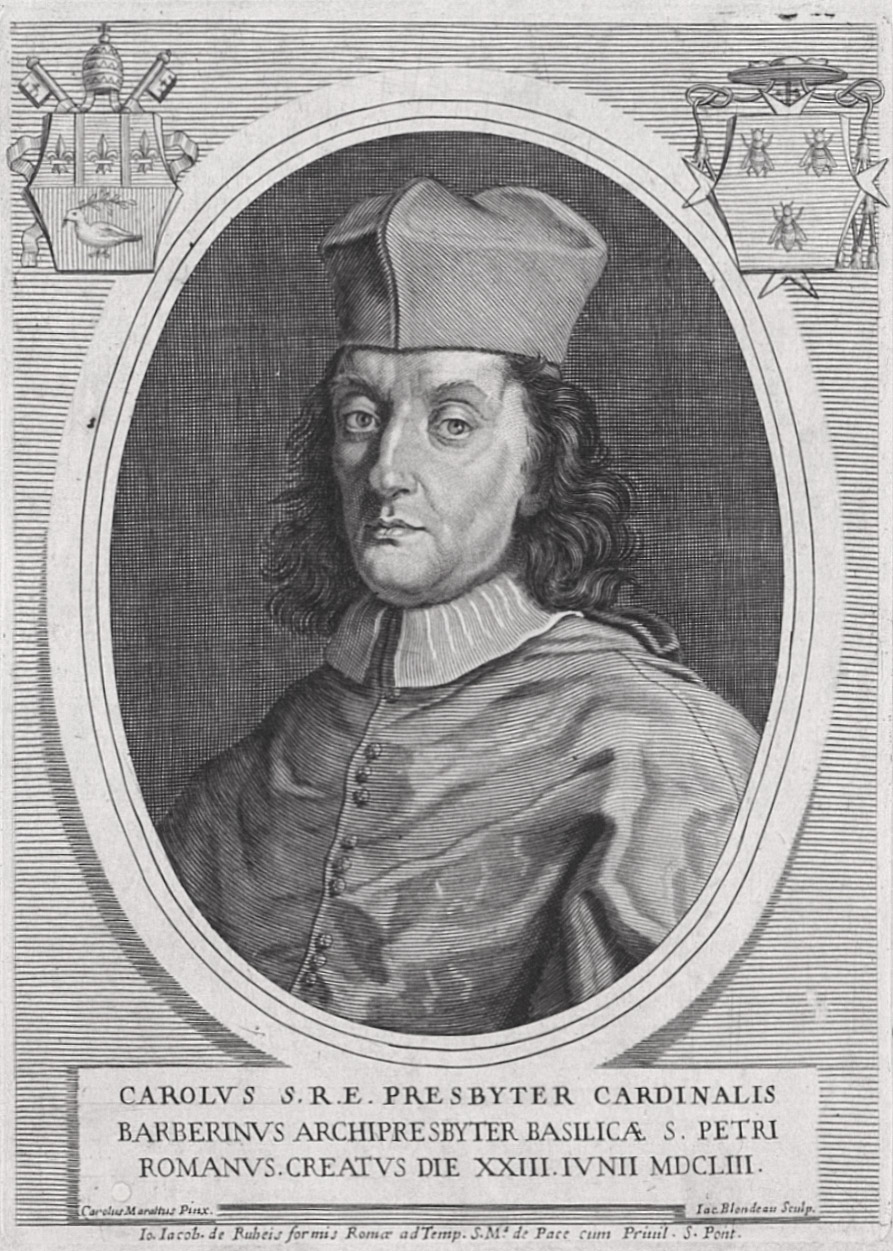 Carlo Barberini was an Italian Catholic cardinal and member of the Barberini family. He was the grand-nephew of Maffeo Barberini and son of Taddeo Barberini.

The Papal election of 1118 saw the election of Pope Gelasius II as the successor of Pope Paschal II who died January 21, 1118, in Rome after an over 18-year pontificate. Gelasius died after only one year in the papacy. 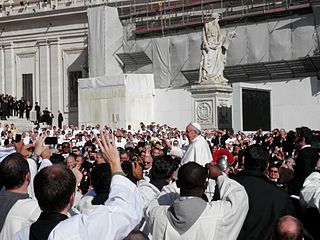 The Papal inauguration of Pope Francis was held on 19 March 2013 in St. Peter's Square in the Vatican. Holy Mass was celebrated by Pope Francis before political and religious leaders from around the world. The crowd was estimated between 150,000 and 200,000. Official delegations from 132 states and various religious groups attended. It was the first papal inauguration attended by the Patriarch of Constantinople in over 1,000 years.