Catholic Church in the Republic of the Congo

There are over two million Catholics in the country, comprising just under half of the country's total population. There is one archdiocese and seven dioceses.

The separation of church and state is a philosophic and jurisprudential concept for defining political distance in the relationship between religious organizations and the nation state. Conceptually, the term refers to the creation of a secular state and to disestablishment, the changing of an existing, formal relationship between the church and the state. 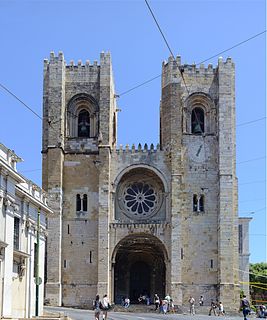 The Catholic Church in Sweden was established by Archbishop Ansgar in Birka in 829, and further developed by the Christianization of Sweden in the 9th century. King Olof Skötkonung is considered the first Christian king of Sweden.

The Catholic Church is "the Catholic Communion of Churches, both Roman and Eastern, or Oriental, that are in full communion with the Bishop of Rome ." The church is also known as the People of God, the Body of Christ, the "Temple of the Holy Spirit", among other names. According to Vatican II's Gaudium et spes, the "church has but one sole purpose -- that the kingdom of God may come and the salvation of the human race may be accomplished."

As of the year 2015, Christianity has more than 2.4 billion adherents, out of about 7.5 billion people. The faith represents one-third of the world's population and is the largest religion in the world, with the three largest groups of Christians being the Catholic Church, Protestantism, and the Eastern Orthodox Church. The largest Christian denomination is the Catholic Church, with 1.3 billion baptized members. The second largest Christian branch is either Protestantism, or the Eastern Orthodox Church.

The Catholic Church in Gabon is part of the worldwide Catholic Church, under the spiritual leadership of the Pope in Rome. It is endowed with the right to elect its own clergy, except archbishops. 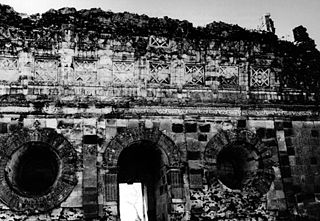 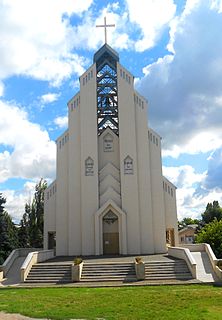 The Church of the Immaculate Conception, referred to in Polish as Kościół Niepokalanego Poczęcia Najświętszej Maryi Panny, is a historic church of the Roman Catholic Archdiocese of Chicago located at 2944 East 88th Street in Chicago, Illinois. It is a prime example of the so-called 'Polish Cathedral style' of churches in both its opulence and grand scale. Along with St. Michael's, it is one of the two monumental Polish churches dominating the South Chicago skyline.

The Catholic Church in Tonga is part of the worldwide Catholic Church under the leadership of its local bishop in communion with the Pope of Rome. It is estimated that approximately 16% of the population of the Pacific island Kingdom are Catholic, being 15,767 in 2004.1 Bishop Soane Patita Paini Mafi succeeded as Bishop of Tonga in 2008. 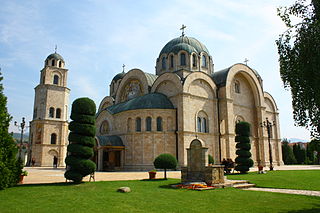 The Catholic Church in Samoa is part of the worldwide Catholic Church, which, inspired by the life, death and teachings of Jesus Christ, and under the spiritual leadership of the Pope and Roman curia in the Vatican City is the largest Christian church in the world. Catholic missionaries arrived in Samoa in 1845 and today Catholics account for around 20% of the overall population. Archbishop Alapati Lui Mataeliga was ordained as head of the Archdiocese of Samoa-Apia in 2003.