The Cesarewitch Handicap is a flat handicap horse race in Great Britain open to horses aged three years or older. It is run at Newmarket over a distance of 2 miles and 2 furlongs (3,621 metres), and finishes on the Rowley Mile. It is scheduled to take place each year in October.

"Cesarewitch" is an anglicised version of Tsesarevich, the title of the heir to the throne in Imperial Russia. The race was named in honour of Tsesarevich Alexander (later Tsar Alexander II), after he donated £300 to the Jockey Club.

The event was established in 1839, and the inaugural running was won by Cruiskeen. It was founded in the same year as another major handicap at Newmarket, the Cambridgeshire. The two races came to be known as the Autumn Double.

The Cesarewitch initially took place before the Cambridgeshire, but the schedule was later reversed and it is now held two weeks after the other race. Three horses completed the double in the 19th century — Rosebery (1876), Foxhall (1881) and Plaisanterie (1885) — but the feat has been rarely attempted since then.

The Sun Chariot Stakes is a Group 1 flat horse race in Great Britain open to fillies and mares aged three years or older. It is run on the Rowley Mile at Newmarket over a distance of 1 mile, and it is scheduled to take place each year in early October.

The British Champions Long Distance Cup is a Group 2 flat horse race in Great Britain open to thoroughbreds aged three years or older. It is run at Ascot over a distance of 1 mile 7 furlongs and 209 yards, and it is scheduled to take place as part of British Champions Day each year in October.

The Cambridgeshire Handicap is a flat handicap horse race in Great Britain open to horses aged three years or older. It is run on the Rowley Mile at Newmarket over a distance of 1 mile and 1 furlong, and it is scheduled to take place each year in late September.

Plaisanterie (1882–1906) was a Champion Thoroughbred racehorse.

Sir Visto (1892–1914) was a British Thoroughbred racehorse and sire. In a career that lasted from 1894 to 1896 he ran thirteen times and won three races. As a three-year-old in the 1895 he won both The Derby and the St Leger at Doncaster. He failed to win in six subsequent races and was retired to stud at the end of the 1896 season. 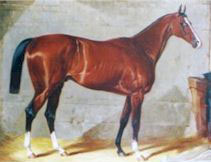 St. Gatien was a British Thoroughbred racehorse and sire. In 1884 he was involved in the second and final dead heat in the history of The Derby, part of an unbeaten sequence of twelve races. St. Gatien went on to become a dominant performer in long-distance races, winning the Gold Cup and the Alexandra Plate at Royal Ascot, the Cesarewitch Handicap carrying a record weight, and three successive running of the Jockey Club Cup.

Robert the Devil (1877–1889) was a British Thoroughbred racehorse and sire. In a career that lasted from 1879 to 1881 he ran eleven times and won nine races. He was the leading three-year-old colt in Europe in 1880 when his wins included the Grand Prix de Paris in France and the St Leger and the Cesarewitch in England. He had a notable rivalry with the Duke of Westminster's colt Bend Or, winning three of their five racecourse meetings. Robert the Devil was regarded by contemporary observers as one of the greatest horses of the 19th century. He had limited success at stud and died in 1889. 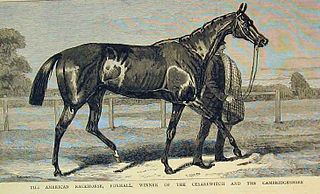 Foxhall (1878–1904) was an American-bred Thoroughbred racehorse and sire. He was trained in Britain during a racing career that lasted from 1880 until June 1882 during which he ran eleven times and won seven races. As a three-year-old in 1881 he proved himself to be the outstanding colt of the season in Europe, winning the Grand Prix de Paris and becoming the second of only three horses to complete the Autumn Double of the Cesarewitch and the Cambridgeshire.

Tristan (1878–1897) was a British Thoroughbred racehorse and sire. In a career that lasted from the April 1880 to October 1884, he ran 51 times and won 27 races. A useful performer at two and three years old, he matured into an outstanding horse in his last three seasons, winning important races at distances ranging from six furlongs to two and a half miles and defeating three winners of The Derby. Unusually for a 19th-century racehorse, he was regularly campaigned internationally, winning three consecutive runnings of the Grand Prix de Deauville. Tristan's success was achieved despite a dangerous and unpredictable temperament: at the height of his success, he was described as "a very vile-tempered animal".

John Barham Day (1793–1860) was a British jockey and trainer. For much of his career he was usually known simply as John Day; when his son of the same name rose to prominence, the older man was referred to as John Barham Day, John Day, Sr. or Old John Day. A member of a highly successful racing family, Day first made his name as a jockey in the 1820s and rode the winners of sixteen classics before retiring. In the mid-1830s he set up as a trainer of racehorses at Danebury near Stockbridge. He established a reputation as a shrewd and skillful handler of horses and specialised in landing betting coups. Horses trained by Day won seven classics between 1838 and 1854, during which time he was regarded as the leading trainer in the South of England and the main rival of the Yorkshire-based John Scott. He was known as "Honest John", but the sobriquet appears to have been applied ironically.

William Day (1823–1908) was a British jockey and trainer. A member of a large and successful racing family, Day had some success as a jockey before setting up as a trainer at Woodyates, Dorset in 1848. In a training career of over thirty years he sent out the winners of three classics and numerous major handicap races before retiring in the 1880s. His best horse was probably the American colt Foxhall. Day was also a gambler who was involved in scandals and clashes with other racing figures.

Bendigo was a British Thoroughbred racehorse. He was owned by H. T. Barclay and trained by Charles Jousiffe. He won the first running of the Eclipse Stakes, the most valuable race in Britain. He also won the Champion Stakes and was noted for his performances in the top handicap races.

Amphion was a British Thoroughbred racehorse. He won some minor races as a two-year-old, but was not entered into any of the Classics. As a three-year-old he won several races including the Great Jubilee Stakes. He improved again as a four-year-old, winning the Hardwicke Stakes, Lancashire Plate and Champion Stakes, beating several classic winners in the process. He remained in training as a five-year-old, winning the March Stakes and Rous Memorial Stakes. Amphion was trained by Mr. Chandler and owned by General Byrne. As a stallion he sired several top class horses including the sprinter Sundridge, Champion Stakes winner Dieudonne and Eclipse Stakes winner Lally.

Sayani was a French Thoroughbred racehorse and sire. He was best known for his form as a three-year-old in 1946 when he won several important stakes races in England and France including the Prix Edmond Blanc, Prix Daphnis, Jersey Stakes and Prix Jacques le Marois. His best performance however, came when he recovered from a poor start to win the Cambridgeshire Handicap under a record weight. He was then retired to stud and became a successful breeding stallion first in France and later in Brazil.

Petronel was a British Thoroughbred racehorse and sire. After showing promise when winning the Troy Stakes as a juvenile in 1879, he recorded a major upset when defeating his more fancied opponents to take the 2000 Guineas in the following spring. He had never been entered in the other British Classic Races, but won at Royal Ascot and in several other top-class races that year. In 1881 he was one of the best staying horses in England, winning seven races including the Epsom Stakes, Rous Memorial Stakes, Great Yorkshire Handicap and Doncaster Cup as well as Queen's Plates at Stockbridge, Newmaket and Liverpool. He developed breathing problems and was never as good again, although he won Queen's Plates at Stockbridge and Newcastle in 1882. After his retirement from racing he had some success as a breeding stallion.