Barry Hills had three sons in his first marriage, to Maureen Newson: John, Michael, and Richard. John (died 2014) was a horse trainer, while the twins Michael and Richard are retired jockeys both of whom are still active in the horse racing industry, After his divorce, he married Penny Hills, and had two more sons, Charles and George. Charles is a current trainer and George provides bloodstock insurance in Lexington, Kentucky, United States.

In the mid-1950s, Barry was an apprentice jockey to Fred Rimell and to George Colling. In 1959 he was the head lad of John Oxley. In 1969, he acquired a horse training license and began training horses at South Bank Stables in Lambourn. In 1986, he moved to Robert Sangster's Manton Yard where he remained until 1990, when he moved back to South Bank. By the end of 2000, he had trained 2166 winning horses in Britain. He trained his 3,000th winner, when Chapter And Verse won at Pontefract on 7 April 2009.

In 2009 he was presented with two Lifetime Achievement Awards at the Animal Health Trust Equine Awards and at the Derby Awards, both in London.

He ended his training career on 22 August 2011 and his son, Charles Hills, took over the licence. [1] When his son John died of cancer in 2014, Barry Hills was given a temporary licence to take over the running of the Kingwood House stable in Lambourn. [2]

Roberto was an American-bred, Irish-trained Thoroughbred Champion racehorse. In a career that lasted from 1971 until July 1973 he ran fourteen times and won seven races. He was the best Irish two-year-old of 1971, when his victories included the National Stakes. As a three-year-old, he won the Derby before recording his most famous victory when beating Brigadier Gerard in the inaugural running of the Benson and Hedges Gold Cup. This is regarded by many experts to have been one of the greatest ever performances on a European racecourse. He won the Coronation Cup as a four-year-old before being retired to stud. Roberto required a left-handed track to perform to his best; he never won going right-handed. He was described by Lester Piggott as " a champion when things were in his favour". Roberto also proved to be a highly successful and influential stallion.

The 1990 Epsom Derby was a horse race which took place at Epsom Downs on Wednesday 6 June 1990. It was the 211th running of the Derby, and it was won by Quest for Fame. The winner was ridden by Pat Eddery and trained by Roger Charlton. The pre-race favourite Razeen finished fourteenth.

Juddmonte Farms is a horse breeding farm, owned until his death by Prince Khalid bin Abdullah of Saudi Arabia. A member of the Saudi Arabian royal family the successful businessman presided over the massive conglomerate Mawarid Holding. resided over the massive conglomerate Mawarid Holding. Prince Khalid died on 12th January 2021; his sons are involved in managing business interests that include insurance, catering, cement, cleaning, foodstuffs and electronics.

Roger J. Charlton is an English racehorse trainer and a former flat racing jockey. He trains horses in Beckhampton Stables in Wiltshire, England. He made an immediate impact as a trainer in England and Europe, including victories in both The Derby and the Prix du Jockey Club in 1990. There has been continued success with the likes of Three Valleys, Tante Rose, Harmonic Way, Trade Fair, Tamarisk, Bated Breath, Avonbridge, Striking Ambition and then Al Kazeem had a series of major victories in 2013. After retiring him to stud, Time Test appeared on the scene in 2015.

Cormorant Wood was a British Thoroughbred racehorse and broodmare. She showed useful form in the early part of her career but developed into a top-class runner in the second half of her three-year-old season, winning the Sun Chariot Stakes and Champion Stakes at Newmarket Racecourse in October 1983. Her four-year-old season was curtailed by injury, but she became the first filly to win the Lockinge Stakes and produced her best performance in her final race when she won the Benson and Hedges Gold Cup at York Racecourse. At the end of the year she was the highest-rated female racehorse trained in Europe. Cormorant Wood was retired to stud where she had some success as a producer of winners.

Tap On Wood was an Irish-bred British-trained Thoroughbred racehorse and sire best known for winning the classic 2000 Guineas in 1979. As a two-year-old in 1978 he won seven of his thirteen races including the National Stakes. In the following spring he defeated the outstanding miler Kris to record an upset victory in the Guineas. His later career was disrupted by illness and he appeared in only two more races, finishing unplaced in the Derby and winning the Kiveton Park Stakes. He subsequently had some success as a breeding stallion in Europe and Japan. 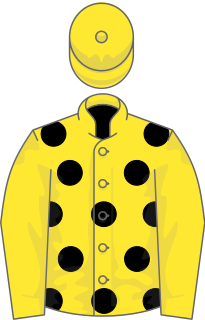 Polygamy was a British Thoroughbred racehorse, best known for winning the classic Epsom Oaks in 1974. As a two-year-old in 1973, she showed promise by winning three races and finishing fourth in the Critérium des Pouliches. In the following spring she won the 1000 Guineas Trial Stakes and was narrowly beaten in the 1000 Guineas before winning the Oaks. She was retired after being beaten in her only subsequent race and died without producing a foal.

Dibidale was an Irish-bred, British-trained Thoroughbred racehorse. After one minor win in two races as a two-year-old, she emerged as arguably the best filly of her generation in the following year. She won the Cheshire Oaks by seven lengths and appeared a most unlucky loser when her saddle slipped in the closing stages of The Oaks. She then won the Irish Oaks by five lengths, beating the first three in the Epsom race and added a win in the Yorkshire Oaks before her season was ended by injury. She failed to win as a four-year-old and sustained a fatal injury in the Geoffrey Freer Stakes in August.

Distant Relative was an Irish-bred British-trained Thoroughbred racehorse and sire. After running fifth on his debut he never finished unplaced again ending his racing career with a record of eight wins and nine places from eighteen starts. He emerged as top-class miler in 1989, recording wins in the Phoenix International Stakes, Hungerford Stakes, Celebration Mile and Challenge Stakes. He was even better as a four-year-old in 1990, winning the Sussex Stakes and the Prix du Moulin. He was also placed in many important races including the Irish 2000 Guineas, Queen Elizabeth Stakes and Prix Jacques Le Marois. On his retirement from racing he stood as a breeding stallion and had some success as a sire of winners. He died in Turkey in 2005 at the age of nineteen.