The International Stakes is a Group 1 flat horse race in Great Britain open to horses aged three years or older. It is run at York over a distance of 1 mile, 2 furlongs and 56 yards (2,063 metres), and it is scheduled to take place each year in August.

The event was devised by Major Leslie Petch, a former Clerk of the Course at York. It was first run in 1972, but by this time Petch had resigned from his position due to ill health. The race was originally sponsored by Benson and Hedges and called the Benson and Hedges Gold Cup. The inaugural running was won by Roberto, that year's Derby winner. The second-placed horse was Brigadier Gerard – his only defeat in a career of eighteen races.

The sponsorship of Benson and Hedges continued until 1985, and for the following two years the event was backed by the bloodstock company Matchmaker. Its title during this period was the Matchmaker International. The present sponsor, Juddmonte Farms, started supporting the race in 1989. It is now familiarly known as the Juddmonte International.

The International Stakes is currently held on the opening day of York's four-day Ebor Festival meeting. It is the venue's richest race of the season. 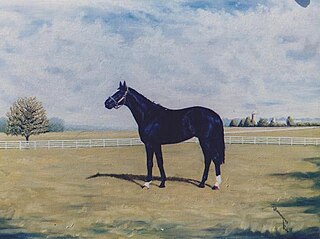 The King George VI and Queen Elizabeth Stakes is a Group 1 flat horse race in Great Britain open to horses aged three years or older. It is run at Ascot over a distance of 1 mile 3 furlongs and 211 yards, and it is scheduled to take place each year in July.

The Duke of York Stakes is a Group 2 flat horse race in Great Britain open to horses aged three years or older. It is run over a distance of 6 furlongs at York in May.

The Great Voltigeur Stakes is a Group 2 flat horse race in Great Britain open to three-year-old colts and geldings. It is run at York over a distance of 1 mile 3 furlongs and 188 yards, and it is scheduled to take place each year in August.

The Gimcrack Stakes is a Group 2 flat horse race in Great Britain open to two-year-old colts and geldings.

The Lowther Stakes is a Group 2 flat horse race in Great Britain open to two-year-old fillies. It is run at York over a distance of 6 furlongs, and it is scheduled to take place each year in August. 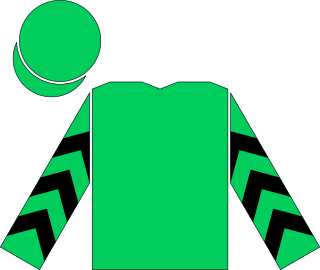 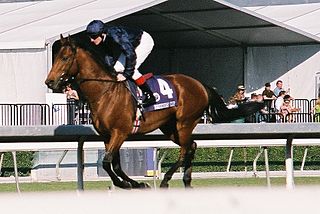 Twice Over is British Thoroughbred racehorse. He was a top-class middle-distance performer whose wins included the Eclipse Stakes, the International Stakes and two runnings of the Champion Stakes.

Observatory was a thoroughbred race horse. He won the Queen Elizabeth II Stakes at Ascot, and the Prix d'Ispahan in France.

Dansili is a British Thoroughbred racehorse. He won five races, including the Prix du Muguet. After retiring from racing he became a successful stallion, with his progeny including Prix de l'Arc de Triomphe winner Rail Link and King George VI and Queen Elizabeth Stakes winner Harbinger. He also became Champion sire in France in 2006. 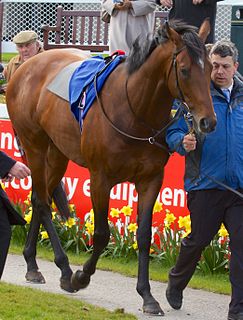 Declaration of War is an American-bred, Irish-trained Thoroughbred racehorse. He won the Group Three Diamond Stakes in 2012, but emerged as a world-class performer in the following year, winning the Queen Anne Stakes and International Stakes and being placed in the Eclipse Stakes, Sussex Stakes and Breeders' Cup Classic.

Sookera was an American-bred Irish-trained Thoroughbred racehorse and broodmare. Racing only as a two-year-old in 1977, she won three times and finished second twice, from five races. After winning on her debut and finishing second on her next appearance, she recorded her first major success when defeating male opponents in the Chesham Stakes. She returned from a late summer break and finished second in the Moyglare Stud Stakes before winning the Group One Cheveley Park Stakes. Sookera never ran again but became a very successful broodmare. She produced several winners including So Factual and is the female-line ancestor of numerous major winners including Dansili, Leroidesanimaux, Banks Hill and Intercontinental.

Scottish Rifle was an Irish-bred British-trained Thoroughbred racehorse and sire. After winning one minor race as a juvenile he emerged as a top-class middle distance colt in 1972, winning the Predominate Stakes, Gordon Stakes and March Stakes as well as finishing second in the Irish Derby. He reached his peak as a four-year-old in 1973, winning the Earl of Sefton Stakes, Brigadier Gerard Stakes, Westbury Stakes, Eclipse Stakes and Cumberland Lodge Stakes. He also finished second in the Prince of Wales's Stakes and the Benson and Hedges Gold Cup and ran third in the Washington D C International. After his retirement from racing he stood as a breeding stallion in England and Czechoslovakia but had little success as a sire of winners. He died in 1984.