Luca M. Cumani (born 7 April 1949, in Milan, Italy)[ citation needed ] is an Italian thoroughbred horse trainer and breeder. He trained at Bedford House Stables in Newmarket from 1976-2019. He has trained a multitude of high-profile horses, including seven Classic race winners, two Epsom Derby winners in Kahyasi (1988) and High-Rise (1998), as well as a Breeders' Cup Mile winner in Barathea (1994).

As the son of champion amateur jockey Elena and champion trainer Sergio Cumani, horseracing has always been in his blood. He followed in their footsteps, emulating first his mother and then his father.

Cumani is the father of Francesca Cumani who is the co-presenter of ITV's racing coverage in the UK. [1]

Realising that Newmarket is the centre of the racing world, Luca moved to England in his early twenties to work for ten-time champion trainer Henry Cecil.

It was not long before he started up his own training establishment at Bedford House. Within ten years he had 12 Group 1 winners in five countries and the tally has now risen to 55 until the present day. Not content with claiming the majority of the big domestic races, he has ventured far and wide with globetrotting champions such as Falbrav and Alkaased to win Group 1 races in Hong Kong and Japan, respectively.

Cumani has also earned a reputation as a mentor to jockeys and assistant trainers. Frankie Dettori, Jimmy Fortune, Jason Weaver, Royston Ffrench and Nicky Mackay are all previous Champion Apprentices who learnt their trade under his tutelage. Leading rider Kieren Fallon was formerly employed by Cumani, as was rider Kirsty Milczarek. Christophe Clement, James Toller, Jonathan Portman, Chris Wall, John Berry, David Simcock and Marco Botti are the best known current trainers that spent a portion of their formative years as assistant trainer to Cumani.

Since 1984 Cumani and his wife Sara have owned and managed the Fittocks Stud at Upend, producing many good horses including Milan, Magical Romance, Chicquita and Alexandrova. [2] [3]

In October 2018 Cumani announced that he would retire from training at the end of the year. [4]

Starcraft is a New Zealand-bred Thoroughbred racehorse who came to international attention when he won the Group 1 Queen Elizabeth II Stakes at Newmarket in England in September 2005. He was the winner of five Group One (G1) races in four countries, the 2004 Australian Champion Three Year Old and also the 2005 World Champion Older Turf Miler.

Falbrav is a retired Thoroughbred racehorse and active sire, bred in Ireland but trained in Italy and the United Kingdom during his racing career which ran from 2000 to 2004. He is notable for having won Group 1/Grade I races in five countries: the Premio Presidente della Repubblica and the Gran Premio di Milano in Italy; the Japan Cup in Japan; the Prix d'Ispahan in France; the Eclipse Stakes, the Juddmonte International Stakes and the Queen Elizabeth II Stakes in the United Kingdom and the Hong Kong Cup in Hong Kong.

Clive Brittain is a retired British race-horse trainer. He began training as an apprentice in 1949, and on his own as a licensed trainer from 1972 after working for Noel Murless. He trained at Carlburg Stables in Newmarket, Suffolk and sent out his final runner prior to retirement in October 2015. His best-known horse is Pebbles, winner of the 1,000 Guineas in 1984 and the Breeders' Cup Turf in 1985.

The 1988 Epsom Derby was a horse race which took place at Epsom Downs on Wednesday 1 June 1988. It was the 209th running of the Derby, and it was won by Kahyasi. The winner was ridden by Ray Cochrane and trained by Luca Cumani. The pre-race favourite Red Glow finished fourth. 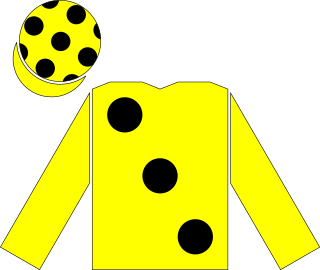 High-Rise is a retired Thoroughbred race horse and active sire, bred in Ireland, but trained in the United Kingdom, Dubai and the United States. He is best known as the winner of the Derby in 1998. He is currently at stud in Ireland. 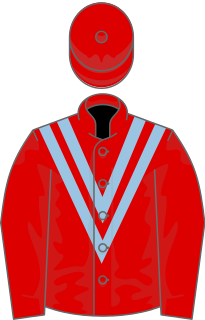 Barathea was an Irish-bred, British-trained Thoroughbred racehorse. In a racing career which lasted from October 1992 until November 1993 he ran sixteen times and won five races. In 1994 Barathea won the Breeders' Cup Mile at Churchill Downs and was named European Horse of the Year at the Cartier Racing Awards. He went on to become a successful stallion.

Doyoun was a British Thoroughbred racehorse and sire, best known for winning the classic 2000 Guineas in 1988. In a racing career which lasted from October 1987 until October 1988 he ran seven times and won three races. After winning his only race as a two-year-old in 1987, Doyoun produced his most impressive performance on his three-year-old debut when he defeated Warning in the Craven Stakes. He won the 2000 Guineas on his next appearance but failed to win again, although he did finish third in The Derby. He was retired to stud at the end of the season, and after a slow start to his breeding career, sired several important winners including Daylami and Kalanisi. He died in Turkey in 2002.

Sheriff's Star was a British Thoroughbred racehorse and sire. As a two-year-old he won his first two races before establishing himself as one of the best British colts of his generation with a close second in the William Hill Futurity. In the following year he won the King Edward VII Stakes and Great Voltigeur Stakes, but was well-beaten in both the Derby and the St Leger. He reached his peak as a four-year-old in 1989 when he recorded Group One successes in both the Coronation Cup and Grand Prix de Saint-Cloud. He later stood as a breeding stallion in Japan where he had some success as a sire of winners.

Bob Back was an American-bred, British-trained Thoroughbred racehorse and sire. He won the Premio Tevere as a two-year-old and the Valdoe Stakes as a three-year-old, but reached his peak in 1985 when he won the Premio Presidente della Repubblica before recording a 33/1 upset win over a very strong field in the Prince of Wales's Stakes. He was later exported to race in the United States but failed to reproduce his European form, winning one minor race from fourteen attempts. He later became a successful breeding stallion, making his biggest impact as a sire of chasers and hurdlers.

Gossamer is a British thoroughbred racehorse and broodmare. In a racing career which lasted from July 2001 until October 2002 she won four of her eight starts and was one of the best fillies of her generation in Europe at both two and three years of age. As a juvenile she was undefeated in three starts, following up a win in a maiden race with victories in the Group Three Prestige Stakes and the Group One Fillies' Mile. Despite fears that her diminutive stature made her unlikely to improve as a three-year-old, and a defeat when favourite the 1000 Guineas she recovered to record an emphatic success in the Irish 1,000 Guineas. The best of her three subsequent appearances came when she finished third to the colt Rock of Gibraltar in the Prix du Moulin. Since her retirement from racing she has become a successful broodmare.