Chad Van Sickle (born August 23, 1977 in Columbus) is a heavyweight American boxer. He is a former NABA Cruiserweight Champion and former WBC Americas Champion. His manager is Scott Walisa, and he is trained by his father Bob Van Sickle. 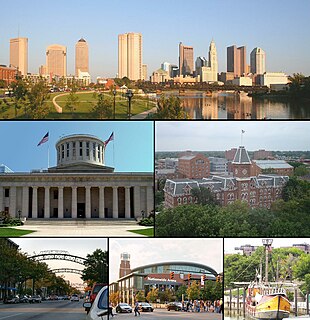 Van Sickle was born in Columbus and began boxing at a teenager, being trained by his father Rob Van Sickle and 1984 Olympic Gold Medalist Jerry Page.

Van Sickle did run a boxing gym in Columbus, Ohio, which is called Team VanSickle 12 Round Boxing. This gym opened up after he ran a gym at the Westland Mall (Columbus) with another professional boxer named Leo Martinez. He now trains fighters at Skrap House MMA in Grove City, Ohio, just south of Columbus, Ohio.

Leo Martinez,, is a Filipino actor, comedian and director. Martinez is currently the director general of the Film Academy of the Philippines.

Sean O'Grady is the former World Boxing Association (WBA) Lightweight Champion of the World, and currently an American commercial realtor. O'Grady had a record of 81 wins and 5 losses as a professional boxer, with 70 wins by knockout.

Sammy Mandell was a World lightweight boxing champion from 1926-1930. Born in Rockford, Illinois, and named Salvatore Mandala, he was known as the "Rockford Sheik" due to his Rudolph Valentino like good looks and as the "Rockford Flash" due to his fast hands and foot speed. His father was an Albanian and his mother Italian. Statistical boxing website BoxRec ranks Mandell as the 13th greatest lightweight boxer to have ever lived. He was inducted into the International Boxing Hall of Fame in 1998. 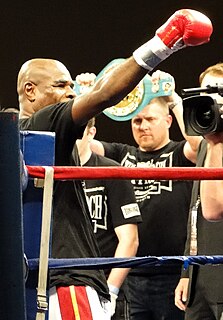 Glengoffe Donovan Johnson is a Jamaican former professional boxer who competed from 1993 to 2015. He held the IBF, IBO and Ring magazine light heavyweight titles between 2004 and 2005, and challenged once each for world titles at middleweight and super middleweight.

Kevin Rooney is an American former boxer and a current boxing trainer. He was portrayed by Clark Gregg in the 1995 movie Tyson and by Aaron Eckhart in the 2016 movie Bleed for This.

Johnathon Maurice Banks is an American former professional boxer and former IBO cruiserweight champion. He currently works as a boxing trainer, most notably for former heavyweight champion Wladimir Klitschko, and was himself trained by the late Emanuel Steward.

Robert Hines, was a professional boxer in the Light Middleweight (154lb) division.

Shaun George is a US American professional boxer fighting in the light-heavyweight division. He is best known for sensationally upsetting former heavyweight champ Chris Byrd which all but ended Byrd's career. George is the nephew of former world title challenger and trainer Lennox Blackmoore. He studied paralegal studies at Northern Michigan University. 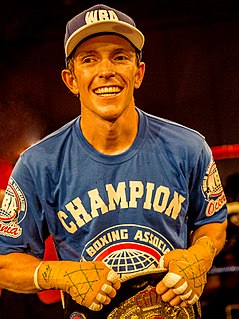 Qamil Balla is a professional Albanian Australian boxer and an Australian Light Welterweight champion. His younger brother Ibrahim Balla is also a boxer.

Noree Jockygym, or another name Khongdee Meekhunapparp, is a retired Thai professional boxer who winner of the WBF Junior lightweight world champion in 1990s.