Mountaineer Casino, Racetrack and Resort is a thoroughbred racetrack and casino resort located on the Ohio River north of New Cumberland, West Virginia. It is owned by Vici Properties and operated by Century Casinos. It is notable for being the first race track in the United States to get slot machines and become a racino.

Originally to be known as Waterford Downs, the track's parent company was incorporated in 1937. [2] The effort was led by Al Boyle, president of the Charles Town Races, who named it after his family's ancestral home of Waterford, Ireland. [3] The company's initial public offering was approved in February 1939, with the track expected to open the following September. [4] By August 1940, construction had not begun, but 250 acres of land had been bought or optioned. [5] In 1942, Boyle planned to begin construction of the track, but expected the grandstand to be delayed at least until 1943 by a steel shortage due to World War II. [6]

The track was purchased by Bill Blair and renamed as Mountaineer Park in 1987. [13] In 1992, Blair sold the track to California-based Excalibur Holding Co. for $4 million cash plus $2.7 million in stock. [14] The track was authorized to have slot machines and installed them in 1994. Excalibur was renamed Winners Entertainment, then renamed MTR Gaming Group. [15]

In 2019, Eldorado Resorts (which had merged with MTR Gaming in 2014) sold Mountaineer, along with two other properties, to Century Casinos and Vici Properties. [16] Century bought Mountaineer's operating business for $30 million, [17] while Vici bought the land and buildings for $97 million and leased them to Century. [18]

The track has a main dirt track with a one-mile oval. The turf course is seven furlongs long and inside the dirt. The track is curved slightly in the front stretch. The track also has a large casino and resort on site.

Mountaineer was one of the busiest Thoroughbred courses in the country with as many as 217 racing dates scheduled in year 2012. The Mountaineer live racing season had consisted of 4 to 5 nights per week, starting as early as March and ending as late as December. This had been reduced to 130 racing dates, running May through November by 2019 [19] The track had been able to offer purses much higher than those in neighboring states and attracted larger field and the products of such a higher parimutuel handle and better attendance. Over the past decade, competition from surrounding states increased, and purses have reduced. Mountaineer hosts the West Virginia Derby, a Grade III race that had significantly grown in stature and purse in the late 2000’s and early 2010’s to a Grade II race, but has also had its purse reduced and reverted to a Grade III race in recent years. The first Saturday in August traditionally has been the day the Derby takes place, and is the only day of the calendar that the track offers afternoon racing. Otherwise, the races are run at 7pm. Mountaineer had previously been considered as a possible host for the 2009 Breeders' Cup, but it was awarded to Santa Anita. [20]

The track runs many stakes and overnight handicaps. Here, in order, are the stakes that ran at Mountaineer in 2005:

The following Graded events were held at Mountaineer Racetrack in 2019.

Woodbine Mohawk Park is a harness racing track in Campbellville, Ontario. It is owned by Woodbine Entertainment Group and is about 30 km west of the company's other racetrack, Woodbine Racetrack in Toronto, Ontario. Woodbine Mohawk Park also has a large slot machine parlour with over 1,000 slot machines, which is operated by Great Canadian Gaming; some of the revenue from this operation is used to increase the horseracing purses.

Monmouth Park Racetrack is an American race track for thoroughbred horse racing in Oceanport, New Jersey, United States. It is owned by the New Jersey Sports and Exposition Authority and is operated under a five-year lease as a partnership with Darby Development, LLC. 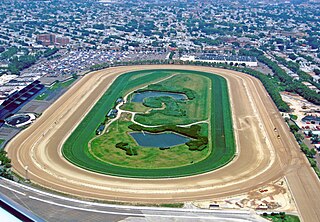 Aqueduct Racetrack is a Thoroughbred horse racing facility and casino in the South Ozone Park and Jamaica neighborhoods of Queens, New York City, United States. Aqueduct is the only racetrack located within New York City limits. Its racing meets are usually from late October/early November through April. The racetrack is located adjacent to a casino called Resorts World New York City.

A racino is a combined race track and casino. In some cases, the gambling is limited to slot machines, but many locations are beginning to include table games such as blackjack, poker, and roulette.

MTR Gaming Group was a gaming company based in Chester, West Virginia that operated horse racing tracks and racinos. It was formed on March 7, 1988 in Wilmington, Delaware. On September 19, 2014, it merged with Eldorado Holdco LLC, forming Eldorado Resorts in Reno, Nevada.

Turfway Park is an American horse racing track located just outside the city limits to the north of Florence, Kentucky, about 10 miles (16 km) south of the Ohio River at Cincinnati. The track conducts live Thoroughbred horse racing during two meets each year—Holiday (December), and Winter/Spring —and offers year-round simulcast wagering from tracks across the continent.

Penn National Gaming, Inc. is an American operator of casinos and racetracks, based in Wyomissing, Pennsylvania. It operates 43 facilities in the United States and Canada, many of them under the Hollywood Casino brand. The company also controls a 36% stake in Barstool Sports. Penn formed a corporate spin-off in November 2013 called Gaming and Leisure Properties.

Oaklawn Racing Casino Resort, formerly Oaklawn Park Race Track, is an American thoroughbred racetrack and casino in Hot Springs, Arkansas. It is the home to The Racing Festival of the South.

Hollywood Casino at Charles Town Races is a race track and casino just outside the eastern city limits of Charles Town, West Virginia, owned by Gaming and Leisure Properties and operated by Penn National Gaming. It features a six furlong thoroughbred horse racing facility that is home of the West Virginia Breeders' Classic. It generally runs a 5 days a week schedule. It also contains over 3,000 slot machines, table games, and sports betting.

The West Virginia Derby is a Thoroughbred horse race held annually at Mountaineer Race Track in Chester, West Virginia, United States. The race is open to three-year-old horses and is run over a distance of 1+1⁄8 miles. A Grade 3 stakes race, it currently offers a purse of $500,000.

Lucky Club Casino and Hotel is a casino and 118-room hotel located on 6.1 acres (2.5 ha) in North Las Vegas, Nevada. The casino is owned and operated by Lucky Silver Gaming.

Century Casinos, Inc. is a gaming company based in Colorado Springs, Colorado.

Hollywood Gaming at Mahoning Valley Race Course, is a thoroughbred racino in Austintown, Ohio. It is owned by Gaming and Leisure Properties and operated by Penn National Gaming.

Vici Properties is a real estate investment trust (REIT) specializing in casino properties, based in New York City. It was formed in 2017 as a spin-off from Caesars Entertainment Corporation. It owns 29 casinos, hotels, and racetracks and 4 golf courses throughout the United States.