Chelsea Common was the ground of Chelsea Cricket Club in the 18th century, an area that virtually disappeared under building work in the 19th century. [1]

Parsons Green is a mainly residential district of Fulham in the London Borough of Hammersmith and Fulham. The green itself, which is roughly triangular, is bounded on two of its three sides by the New King's Road section of the King's Road, A308 road and Parsons Green Lane. The wider neighbourhood is bounded by the Harwood and Wandsworth Bridge Roads, A217 road to the East and Munster Road to the West, while the Fulham Road, A3219 road may be said to define its northern boundary. Its southern boundary is less clearly defined as it merges quickly and imperceptibly with the Peterborough estate and Hurlingham. 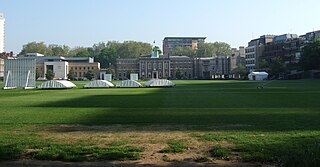 The Artillery Ground in Finsbury is an open space originally set aside for archery and later known also as a cricket venue. Today it is used for military exercises, rugby and football matches. It belongs to the Honourable Artillery Company (HAC), whose headquarters, Armoury House, overlook the grounds.

The 1731 English cricket season was the 35th cricket season since the earliest recorded eleven-aside match was played. Details have survived of 29 matches as well as one notable single wicket match. Match reports in newspapers were increasingly common and began to contain more detail, sometimes including the names of patrons and players. 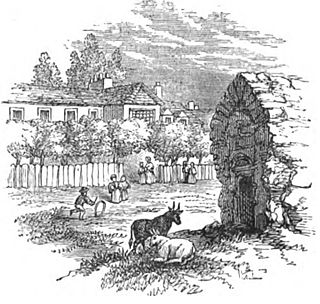 White Conduit Fields in Islington was an early venue for cricket and several major matches are known to have been played there in the 18th century. It was the original home of the White Conduit Club, forerunner of Marylebone Cricket Club (MCC). Later it was used by The Islington Albion Cricket Club, who played their last game at the ground in 1834. Maps from the time show that the cricket field was a few hundred metres north of the White Conduit House, in the land surrounding the modern Richmond Crescent, and paintings suggest it was also possibly on the adjacent field to the south at the modern Barnard Park.

Edwin Stead was a noted patron of English cricket, particularly of Kent teams in the 1720s. He usually captained his teams but nothing is known about his ability as a player. There is uncertainty about his name because his forename has been rendered "Edwin", "Edwyn" or "Edward"; his surname "Stead", "Stede" or "Steed". In the various sources, "Edwin Stead" is the most common version. He was born at Harrietsham in Kent and died in London.

Old Deer Park is an area of open space within Richmond, in the London Borough of Richmond upon Thames, England. It covers 147 hectares of which 90.4 hectares is not in public ownership, largely sports grounds for the sports of rugby and golf. 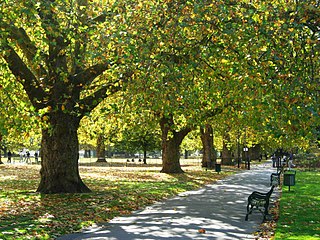 Kennington Common was a large area of common land mainly within the London Borough of Lambeth. The area was notable for being one of the earliest venues for cricket within London and top-class matches were played there from 1724 to 1785. The common was also used for public executions, fairs and public gatherings.

The 1735 English cricket season was the 39th cricket season since the earliest recorded eleven-aside match was played. Details have survived of 10 top-class matches, nine played eleven-a-side and one single wicket match.

Prince's Cricket Ground in Chelsea, London was a cricket ground, created by the brothers George and James Prince as part of the Prince's Club, on which 37 first-class matches were played between 1872 and 1878. The ground was built on in 1883. The boundaries of the site, laid out on the former Cattleugh's nursery gardens, are marked by Cadogan Square West, Milner Street, Lennox Gardens Mews, Walton Street and Pont Street.

Hadlow Cricket Club was one of the early English cricket clubs, formed in the early to mid eighteenth century. Hadlow is a village in the Medway valley near Tonbridge in Kent.

Sunbury Cricket Club had a noted team in the early 18th century which played in major matches. One of its players was William Goodwin, whose skill received comment in a 1724 newspaper report. Goodwin is one of the earliest cricketers named in contemporary sources. In 1730, a Sunbury patron known only as Mr Andrews successfully led the team in a match against the Duke of Richmond's XI. In 1731, Sunbury defeated Kent on Sunbury Common. In 1732, a combined Brentford and Sunbury team lost to London on Walworth Common. Little is known of cricket in Sunbury for the next 200 years.

Lamb's Conduit Field was an open area of Holborn, London, that was a noted cricket venue in the first half of the 18th century.

The Denis Compton Oval is a cricket ground located at the Shenley Cricket Centre in Shenley, Hertfordshire, England. The ground was opened by Denis Compton and the main ground was named in his honour. At the heart of the centre is the 19th century pavilion, originally designed by the legendary cricketer W. G. Grace. 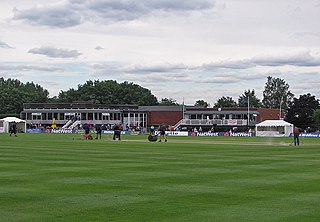 Uxbridge Cricket Ground opened in 1971. Uxbridge Cricket Club moved here after a redevelopment of Uxbridge High Street saw the club move from their Cricketfield Road ground. The present ground is situated across from Uxbridge Common on which the team used to play during the 19th century.

Representing Kingston upon Thames in Surrey, the original Kingston Cricket Club was prominent in the 18th century, taking part in known matches from 1720 to 1767. According to surviving records, it had no specific venue and is known to have played at both Kennington Common and Moulsey Hurst. Kingston teams are recorded, either individually or jointly with other clubs, in eleven known major matches.

Representing Hampton which was then in Middlesex, the original Hampton Cricket Club was prominent in the 18th century, taking part in known matches from 1726 to 1771. According to surviving records, it had no specific venue and is known to have played at both Hampton Court Green and Moulsey Hurst.