Cobra Rock Boot Company (CRBC) is a leather-lace-up bootmaking business in Marfa, Texas. [1] [2] [3] [4] The business has been owned and operated by Logan Caldbeck and Colt Miller since 2011. They earned a runner-up finish in Garden & Gun magazine's Best of the South 2012 awards. [5] The business was featured on episode 2 of the Basin PBS show Western Perspective and on a September 2014 episode of Texas Country Reporter. [6] [7]

The handmade lace-up boots are constructed at a rate of about one pair a week with materials sourced in the U.S. from full grain, oil-tanned cowhides, leather soles, and metal shanks held in place with lemon-wood pegs. [8] Tools and equipment, including a Landis sole stitcher built in 1921 and a Singer topstitcher built in 1939 and found in Big Spring, Texas, come from former boot shops in the Texas Panhandle. Vintage lasts are used and the boots are hand welted. Their signature boot design, the South Highland, includes square toes modeled after a style popular in the 1940s. [9]

Miller was raised in Borden County, Texas, (about 70 miles south of Lubbock) by a cowboy and a schoolteacher. He studied geography and financial planning at Texas Tech. He tours in the Thrift Store Cowboys country band. He started out in the bootmaking business producing cowboy boots. [3]

A shoe is an item of footwear intended to protect and comfort the human foot. Shoes are also used as an item of decoration and fashion. The design of shoes has varied enormously through time and from culture to culture, with appearance originally being tied to function. Additionally, fashion has often dictated many design elements, such as whether shoes have very high heels or flat ones. Contemporary footwear in the 2010s varies widely in style, complexity and cost. Basic sandals may consist of only a thin sole and simple strap and be sold for a low cost. High fashion shoes made by famous designers may be made of expensive materials, use complex construction and sell for hundreds or even thousands of dollars a pair. Some shoes are designed for specific purposes, such as boots designed specifically for mountaineering or skiing. 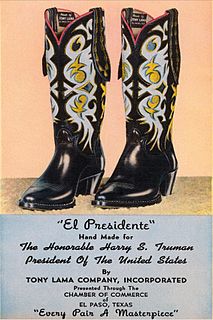 A boot, plural boots, is a type of specific footwear. Most boots mainly cover the foot and the ankle, while some also cover some part of the lower calf. Some boots extend up the leg, sometimes as far as the knee or even the hip. Most boots have a heel that is clearly distinguishable from the rest of the sole, even if the two are made of one piece. Traditionally made of leather or rubber, modern boots are made from a variety of materials. Boots are worn both for their functionality – protecting the foot and leg from water, extreme cold, mud or hazards or providing additional ankle support for strenuous activities with added traction requirements, or may have hobnails on their undersides to protect against wear and to get better grip; and for reasons of style and fashion.

A riding boot is a boot made to be used for horse riding. The classic boot comes high enough up the leg to prevent the leathers of the saddle from pinching the leg of the rider, has a sturdy toe to protect the rider's foot when on the ground and has a distinct heel to prevent the foot from sliding through the stirrup. The sole is smooth or lightly textured to avoid being caught on the tread of the stirrup in the event of a fall. 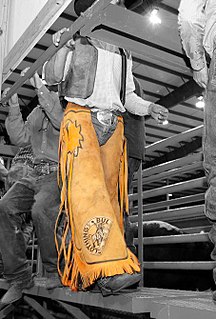 Chaps are sturdy coverings for the legs consisting of leggings and a belt. They are buckled on over trousers with the chaps' integrated belt, but unlike trousers they have no seat and are not joined at the crotch. They are designed to provide protection for the legs and are usually made of leather or a leather-like material. Their name is a shortened version of the Spanish word chaparreras. Chaparreras were named after the chaparral from which they were designed to protect the legs while riding on horseback. Like much of western horse culture, the origin of chaparreras was in the part of New Spain that later became Mexico, and has been assimilated into cowboy culture of the American west. They are a protective garment to be used when riding a horse through brushy terrain. In the modern world, they are worn for both practical work purposes and for exhibition or show use. Chaps have also been adopted for use on motorcycles, particularly by cruiser-style motorcycle riders.

Shoemaking is the process of making footwear. 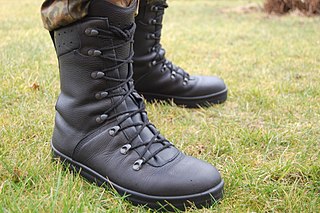 Combat boots are military boots designed to be worn by soldiers during combat or combat training, as opposed to during parades and other ceremonial duties. Modern combat boots are designed to provide a combination of grip, ankle stability, and foot protection suitable for a rugged environment. They are traditionally made of hardened and sometimes waterproofed leather. Today, many combat boots incorporate technologies originating in civilian hiking boots, such as Gore-Tex nylon side panels, which improve ventilation and comfort. They are also often specialized for certain climates and conditions, such as jungle boots, desert boots, and cold weather boots as well as specific uses, such as tanker boots and jump boots.

Tanker boots are military boots closely associated with soldiers who serve on tanks. The tanker boot was "designed by Dehner's own H. E. Ketzler and General George S. Patton Jr. in 1937" who "wanted something easy and fast to get on." Regular combat boots are laced through metal eyelets in the leather upper, but the tanker boots are fastened with leather straps which wrap around the upper and buckle near the top. This benefits the wearer in several ways: 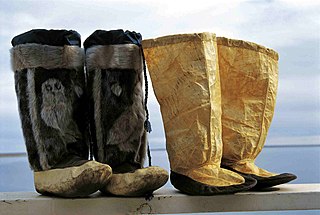 Mukluks or kamik are a soft boot, traditionally made of reindeer (caribou) skin or sealskin, and worn by Arctic aboriginal people, including the Inuit, Iñupiat, and Yupik.

Knee-high boots are boots that rise to the knee, or slightly thereunder or over. They are generally tighter around the leg shaft and ankle than at the top. Originally made of leather, versions made of a synthetic rubber, they are used by fishermen, dairy workers, stable hands, duck hunters, clammers, etc. to protect the feet from water, mud, manure, etc. and to provide traction on slippery surfaces. Most slip on, but there are varieties with buckles and those that lace up.

An Australian work boot is a style of work shoe, typically constructed with a leather upper bound together with elastic sides and pull tabs on the front and back of the boot. The shoe lacks a tongue, and laces, and often contains a steel toe cap for occupational health and safety reasons. When the shoe contains a steel cap they are often known as "safety boots" or "steel toe boots". The boots generally lack an inner lining. The sole is generally polyurethane and the leather uppers are treated to be resistant to hot water, fats and mild alkaline and acid solutions.

Acme Boots was the name of a company that produced boots. It eventually just became a brand name, and was last owned by H.H. Brown, until it was placed under their Double-H Boots brand label.

Tony Lama Boots is a western boot brand and a division of Justin Brands, a Berkshire Hathaway corporation.

Chukka boots are ankle-high leather boots with suede or leather uppers, leather or rubber soles, and open lacing with two or three pairs of eyelets. The name chukka possibly comes from the game of polo, where a chukka is a period of play.

Justin Boots is an American western and equestrian footwear brand. It is a division of Justin Brands, Inc., itself owned by Berkshire Hathaway. 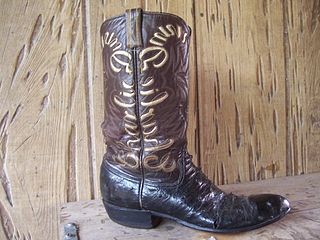 Cowboy boots refer to a specific style of riding boot, historically worn by cowboys. They have a high heel that is traditionally made of stacked leather, rounded to pointed toe, high shaft, and, traditionally, no lacing. Cowboy boots are normally made from cowhide leather, which may be decoratively hand tooled, but are also sometimes made from "exotic" skins like alligator, snake, ostrich, lizard, eel, elephant, stingray, elk, buffalo, and so on.

Nocona Boots is a western boot brand and a division of Justin Brands, a Berkshire Hathaway corporation.

The Lucchese Boot Company is an American retailer of cowboy boots.

Charles Russell "Charlie" Dunn was an American bootmaker of handmade Western, or cowboy, boots for more than 80 years. Dubbed the "Michelangelo of cowboy boots," he first gained widespread notice in the wake of Jerry Jeff Walker's song "Charlie Dunn" (1972). By the time he retired in 1988 from Texas Traditions, his shop in Austin, he routinely charged up to $3,000 for a pair of boots, had a waiting list of hundreds of interested buyers willing to wait three years for delivery, and had made boots for a long list of celebrities, including Arnold Palmer, Mary Kay Place, Gene Autry, Slim Pickens, Don F Brooks, Harry Belafonte, Ernest Tubb, Peter Fonda, and Carole King.

Helm Boots is a brand of boots in the U.S. The company was founded in 2009 by Joshua Bingaman, an Oklahoma native. The company's boots were manufactured in Turkey before production was relocated to Maine. The boots are designed in Austin and then manufactured in Maine using leather materials from American companies like Horween Leather Company and S. B. Foot Tanning Company.