The Consumer Price Index (CPI) is the official measure of inflation of consumer prices of the United Kingdom. It is also called the Harmonised Index of Consumer Prices (HICP). [1]

An explicit inflation target was first set in October 1992 by Chancellor of the Exchequer Norman Lamont, following the UK's departure from the Exchange Rate Mechanism. Initially, the target was based on the RPIX, which is the RPI calculated excluding mortgage interest payments. This was felt to be a better measure of the effectiveness of macroeconomic policy. It was argued that if interest rates are used to curb inflation, then including mortgage payments in the inflation measure would be misleading. Until 1997, interest rates were set by the Treasury.

On election in May 1997, the new Labour government handed control over interest rates to the politically independent Bank of England Monetary Policy Committee. This committee is given the responsibility of adjusting interest rates in order to meet an inflation target set by the Chancellor. [2] The initial target rate of inflation was an RPIX of 2.5%. The committee meets once per month to decide if any changes to the interest rate are necessary. If, in any month, inflation deviates from the target by more than one percentage point, the Governor of the Bank of England is required to write an open letter to the Chancellor explaining the reasons for this and to propose a plan of action for bringing inflation back towards the target.

Since 1996, the United Kingdom has also tracked a Consumer Price Index figure, and in December 2003, the inflation target was changed to CPI of 2%, from the previous target of RPIX of 2.5%. [1]

The CPI calculates the average price increase as a percentage for a basket of 700 different goods and services. Around the middle of each month it collects information on prices of these commodities from 120,000 different retailing outlets. Note that unlike the RPI, the CPI takes the geometric mean of prices to aggregate items at the lowest levels, instead of the arithmetic mean. This means that the CPI will generally be lower than the RPI. The rationale is that this accounts for the fact that consumers will buy less of something if its price goes up, and more if its price goes down; it also ensures that if prices go up and then revert to the previous level, the CPI also reverts to its previous level (which is not the case with the calculation method used for the RPI). According to the ONS, this difference in averaging method is the largest contributing factor to the differences between the RPI and the CPI. [4]

The change in the CPI over the 12 months to August 2008 was 4.7%, while the corresponding figure for RPIX (which excludes mortgage interest) was 5.2% and that for RPI (which includes mortgage interest) was 4.8%. [5] The CPI, the RPIX, and the RPI are published monthly by the Office for National Statistics. A history of CPI and RPIX going back to 1989 can be found at the Office for National Statistics website. [6]

There has been criticism of CPI as being a less effective measure of price rises than the Retail Prices Index, accusing it of being easier to manipulate and less broad based (for example excluding housing). John Redwood, the Conservative MP, has said that CPI targeting meant that interest rates were set lower at a time of rising (RPI) inflation. [7]

Nevertheless, following the UK general election of May 2010 the incoming conservative chancellor George Osborne announced that CPI was to be more widely adopted, including for setting benefits and pensions. [8]

In January 2013 the Office for National Statistics announced its conclusion that the RPI did not meet international standards and it is no longer formally ranked as a UK 'National Statistic'. [9] [10]

The basket of goods and services chosen is intended to reflect changes in society's buying habits. For example, on 23 March 2009, rosé wine and takeaway chicken were added to the basket, whereas volume bottled cider and boxes of wine were removed. [11] 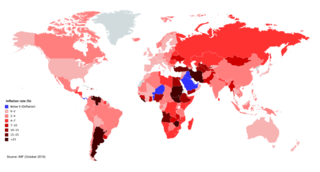 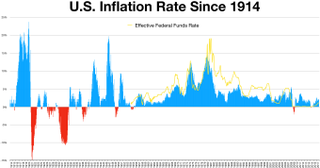 A Consumer Price Index measures changes in the price level of a weighted average market basket of consumer goods and services purchased by households. 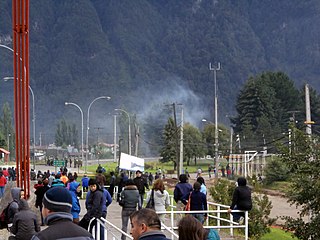 In the United Kingdom, the retail prices index or retail price index (RPI) is a measure of inflation published monthly by the Office for National Statistics. It measures the change in the cost of a representative sample of retail goods and services.

In economics and finance, an index is a statistical measure of change in a representative group of individual data points. These data may be derived from any number of sources, including company performance, prices, productivity, and employment. Economic indices track economic health from different perspectives. Influential global financial indices such as the Global Dow, and the NASDAQ Composite track the performance of selected large and powerful companies in order to evaluate and predict economic trends. The Dow Jones Industrial Average and the S&P 500 primarily track U.S. markets, though some legacy international companies are included. The consumer price index tracks the variation in prices for different consumer goods and services over time in a constant geographical location, and is integral to calculations used to adjust salaries, bond interest rates, and tax thresholds for inflation. The GDP Deflator Index, or real GDP, measures the level of prices of all new, domestically produced, final goods and services in an economy. Market performance indices include the labour market index/job index and proprietary stock market index investment instruments offered by brokerage houses.

The Boskin Commission, formally called the "Advisory Commission to Study the Consumer Price Index", was appointed by the United States Senate in 1995 to study possible bias in the computation of the Consumer Price Index (CPI), which is used to measure inflation in the United States. Its final report, titled "Toward A More Accurate Measure Of The Cost Of Living" and issued on December 4, 1996, concluded that the CPI overstated inflation by about 1.1 percentage points per year in 1996 and about 1.3 percentage points prior to 1996.

The Harmonised Index of Consumer Prices (HICP) is an indicator of inflation and price stability for the European Central Bank (ECB). It is a consumer price index which is compiled according to a methodology that has been harmonised across EU countries. The euro area HICP is a weighted average of price indices of member states who have adopted the euro. The primary goal of the ECB is to maintain price stability, defined as keeping the year on year increase HICP below but close to 2% for the medium term. In order to do that, the ECB can control the short-term interest rate through Eonia, the European overnight index average, which affects market expectations. The HICP is also used to assess the convergence criteria on inflation which countries must fulfill in order to adopt the euro. In the United Kingdom, the HICP is called the CPI and is used to set the inflation target of the Bank of England.

Core inflation represents the long run trend in the price level. In measuring long run inflation, transitory price changes should be excluded. One way of accomplishing this is by excluding items frequently subject to volatile prices, like food and energy. 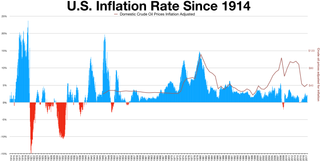 RPIX is a measure of inflation in the United Kingdom, equivalent to the all items Retail Price Index (RPI) excluding mortgage interest payments.

The United States Chained Consumer Price Index (C-CPI-U), also known as chain-weighted CPI or chain-linked CPI is a time series measure of price levels of consumer goods and services created by the Bureau of Labor Statistics as an alternative to the US Consumer Price Index. It is based on the idea that when prices of different goods change at different rates, consumers will adjust their purchasing patterns by purchasing more of products whose relative prices have declined. This reduces the cost of living. The "fixed weight" CPI also takes such substitutions into account, but does so through a periodic adjustment of the "basket of goods" that it represents, rather than through a continuous adjustment in that basket. Application of the chained CPI to federal benefits has been controversially proposed to reduce the federal deficit.