Council of European Municipalities and Regions

At the head of its political structure is its president, currently the president of the region Emilia-Romagna, Stefano Bonaccini. It has a staff of about 30, headed by its secretary-general, Frédéric Vallier.

CEMR’s annual budget is about €2.5 million. Membership fees from its national associations make up the bulk of its funding. About 15% are paid by the European Commission through an annual grant.

Stefano Bonaccini, president of the region Emilia-Romagna, has been elected President of CEMR in December 2016.

He is notably succeeding:

CEMR's task is to promote a united Europe, based on locally and regionally autonomous government and democracy. To this end, it endeavours to shape the future of Europe by enhancing local and regional contributions, to influence European law and policy, to exchange experience at the local and regional levels and to cooperate with partners in other parts of the world. European legislation affects more than 60% of the policies implemented by cities, municipalities and regions. CEMR works together with its members to ensure that their interests are taken into account when European policy is being drafted.

CEMR is active in a number of political fields, including regional policy, transport, the environment, equal opportunities and governance. Its committees and working groups seek to influence draft EU legislation in order that the interests and concerns of local and regional authorities are taken into account from the earliest stages of the EU legislative process.

CEMR’s work focuses on five thematic areas, which affect all aspects of the lives of European citizens as well as the local and regional authorities that represent them:

CEMR is also deeply involved in building an extensive European town twinning network. Today, there are over 30,000 twinning projects linking towns from all over Europe. This process is improved through CEMR's close cooperation with the DG Education and Culture of the European Commission.

Last but not least, CEMR is behind several political documents of significance to local and regional governance, such as the Charter of Local Liberties (adopted in 1953), which inspired the Charter on Local Self-Government of the Council of Europe, adopted in 1985. It also launched the European Charter for Equality of Women and Men in Local Life , which was adopted in 2006 and has been signed by more than 1,800 local and regional governments in Europe.

CEMR represents European local and regional governments (LRG) as employers in the EU social dialogue committee of LRGs, where it sits and discusses with EPSU, the sectorial trade union. [1]

The committee was formally established in 2004 and covers the local and regional public services, such as local administrators, fire-fighters, waste workers, community liaison personnel, etc., counting for some 13 million workers in the EU [2] and 100 000 local and regional authorities. [3]

The committee is a forum for promoting quality public service, exchanging information on labour market issues, and influencing legislation and policy in the fields of employment, training, social protection, labour law, and health and safety.

In May 2006 CEMR launched the European charter for equality of women and men in local life . Local and regional governments are invited to sign the charter to make a formal public commitment to the principle of equality between men and women and to implement the charter within their territory.

The Charter is now available in 27 languages and is signed by more than 1,800 municipalities and regions from 36 European countries.

In order to monitor the implementation of the Charter by signatories, CEMR, in partnership with the Swedish government and the Swedish Association of Local Authorities and Regions, launched an Observatory of the European Charter for equality of women and men in Local Life [4] in March 2012.

According to CEMR town twinning has always been a vital way to bring Europe closer to its citizens beyond national boundaries.

In May 2007, CEMR organised a conference on Twinning for tomorrow's world in Rhodes. Over 600 representatives of local governments from across Europe met to discuss issues like new types of twinning; obtaining financial support; and how twinning can contribute to social inclusion. In September 2011, CEMR is organising in Rybnik (Poland) a European congress on citizenship and twinning. It will provide participants with the possibility to discover the next generation of partnerships between local and regional governments and their citizens; explore how to foster the development of a more "grassroots democracy" and to participate in a consultation on citizenship.

The European Union created a Committee of the Regions to represent Regions of Europe as the layer of EU government administration directly below the nation-state level. The Committee has its headquarters in Brussels.

The European Committee of the Regions (CoR) is the European Union's (EU) assembly of local and regional representatives that provides sub-national authorities with a direct voice within the EU's institutional framework.

The Council of European Municipalities and Regions launched in May 2006 a European charter for equality of women and men in local life. This charter is addressed to the local and regional governments of Europe, who are invited to sign it, to make a formal public commitment to the principle of equality of women and men, and to implement, within their territory, the commitments set out within the Charter.

The Chamber of Local Authorities is one of the two Chambers of the Congress of Local and Regional Authorities of the Council of Europe. The Chamber is the voice of local authorities in the Council of Europe. It consists of 324 representatives from the Council's 47 member states, who either hold a general local authority mandate from direct elections or are politically accountable to a directly elected assembly. The Chamber provides an opportunity for local officials to discuss common concerns, share their experiences and develop relevant policies. 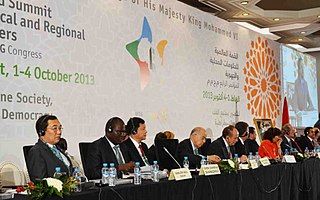 United Cities and Local Governments (UCLG) is an umbrella international organisation for cities, local and regional governments, and municipal associations throughout the world that is concerned with representing and defending the interests of local governments on the world stage.

The Covenant of Mayors is a European co-operation movement involving local and regional authorities. Signatories of the Covenant of Mayors voluntarily commit to increasing energy efficiency and the use of renewable energy sources on their territories. By their commitment, they support the European Union 20% CO
2 reduction objective to be reached by 2020.

The range of processes of dissemination and harmonization resulting in development of a common European culture can be summarized under the term of Europeanisation. Europeanisation appears at both, national and regional level and is determined by different types of adaptation pressures and "mediating" institutions operating within different actors (bodies) of governance. Europeanisation emphasizes the involvement of local framework, development of more urban partnerships and encouragement of wider level of actors in multilevel territorial interaction.

The UCLG Committee on Social Inclusion, Participatory Democracy and Human Rights is one of the four Committees of the United Cities and Local Governments. As an autonomous network in the framework of UCLG, its stated goal is to bring together local authorities from across the world to exchange points of view and local initiatives on social inclusion, participatory democracy and human rights. Inheritor of the forums of local authorities (FAL) held in parallel to the first editions of the World Social Forum, the Committee has become a relevant stakeholder in global advocacy for human rights in the city and the Right to the City Throughout its history, the Committee been characterized by facilitating meetings and networking between progressive local authorities, with a special emphasis in the Latin American and European region. Headquartered in Barcelona, the Committee is composed by more than 100 local governments and various partner organizations. 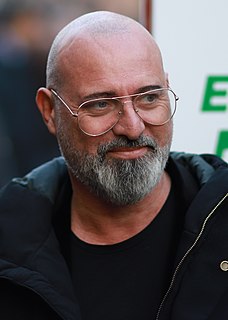 Stefano Bonaccini is an Italian politician and member of the Democratic Party (PD). He has been serving as the President of Emilia-Romagna since 24 November 2014.

ALDA, the European Association for Local Democracy, is a membership based organisation established in 1999 at the initiative of the Council of Europe's Congress of Local and Regional Authorities. ALDA works on the promotion of good governance and citizen participation at the local level, focusing on activities that facilitate cooperation between local authorities and civil society in the European Union and its Neighbourhood.

The 2020 Emilia-Romagna regional election took place in Emilia-Romagna, Italy, on 26 January 2020. The result was the victory of the centre-left coalition and the confirmation of Stefano Bonaccini as President of Emilia-Romagna, with more than 51% of votes, nearly doubling the number of votes received in 2014.