Crystal Records is an American producer and distributor of classical chamber and solo music recordings. [1] The company was founded in 1966 by Peter George Christ (born 1938) [2] [3] and is incorporated in the state of Washington. [4]

Christ, who has served as president of Crystal Records since its inception, is also an oboist and founding member of the Westwood Wind Quintet (founded 1959). Crystal Records produced vinyl records featuring woodwind and brass musicians, but, eventually expanded to percussion, strings, orchestra, accordion, organ, and vocal.

Christ has played the oboe in orchestras and in chamber ensembles large and small, and has taught the instrument at a variety of colleges and universities. But, he holds a Bachelor of Arts in Mathematics from UCLA (1960) and a Master of Arts in Mathematics from San Diego State University (1962). [5] He studied music, but has no formal degree in it. His main oboe teacher for six years was Bert Gassman – former principal of the Los Angeles Philharmonic and former student himself of Marcel Tabuteau.

Crystal's 2011 catalog offers recordings of more than 800 composers, many of the American contemporary genre. According to Fanfare magazine:

The majors may be giving up on recital recordings, which surely are among the least marketable commodities in the business today, but smaller firms, like Crystal, seem to be carrying on admirably. [6]

Crystal Records is one of those unique and specialized labels that, for several decades, has been issuing a compendious catalog of works, both chamber and orchestral, featuring outstanding soloists, primarily but not exclusively players of wind and brass instruments. In this distinctive role, Crystal, under its founder and chief executive Peter Christ, has been filling important gaps in the recorded repertoire that no other label comes close to matching. [7]

Richard Anthony Sayer Arnell was an English composer of classical music. Arnell composed in all the established genres for the concert stage, and his list of works includes six completed symphonies and six string quartets. At the Trinity College of Music, he "promoted a pioneering interest in film scores and electronic music" and jazz. 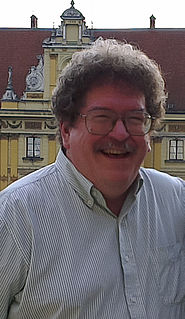 Anthony Gilbert is a British composer and academic, long associated with the Royal Northern College of Music. 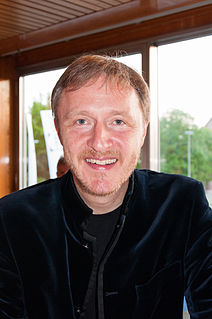 Albrecht Mayer is a German classical oboist. The principal oboist of the Berlin Philharmonic, he is internationally known as a soloist and chamber musician and has made many recordings.

Kenneth Daniel Fuchs is a Grammy Award-winning American composer. He currently serves as Professor of Music Composition at the University of Connecticut (Storrs).

Jan Bach was an American composer. He taught at the University of Tampa (Florida) from 1965 to 1966 and at Northern Illinois University in DeKalb, Illinois from 1966 to 2002. His primary performing instrument was the horn, and he was renowned among hornists for his horn pieces. He also played the piano.

Harmonie is a German word that, in the context of the history of music, designates an ensemble of wind instruments employed by an aristocratic patron, particularly during the Classical era of the 18th century. The Harmonie would be employed for outdoor or recreational music, or as a wind section of an orchestra. Music composed for Harmonie is often called Harmoniemusik.

Jiří Družecký was a Czech composer, oboist, and timpanist.

Kerry Turner is an American composer and horn player. Turner is a recognized name in the horn and brass industry. Turner’s major ensembles with whom he performs include the American Horn Quartet, the Virtuoso Horn Duo, and the Luxembourg Philharmonic Orchestra. Turner has performed internationally as a soloist and clinician. Turner also sings tenor in a semi-professional octet.