Current affairs is a genre of broadcast journalism in which major news stories are discussed at length in a timely manner.

This differs from regular news broadcasts that place emphasis on news reports presented for simple presentation as soon as possible, often with a minimum of analysis. It is also different from the news magazine show format in that the events are discussed immediately.

The UK's BBC programmes such as This World , Panorama , Real Story , BBC Scotland Investigates , Spotlight , Week In Week Out , and Inside Out fit the definition. [1]

In Canada, CBC Radio produces a number of current affairs show both nationally such as The Current and As it Happens as well as regionally with morning current affairs shows such as Information Morning , a focus the radio network developed in the 1970s as a way to recapture audience from television. [2]

Additionally, newspapers such as the Private Eye , the Economist, Monocle, the Spectator, the Week, the Oldie, the Investors Chronicle , Prospect, MoneyWeek , [3] the New Statesman , Time , Fortune, the BBC History Magazine, and History Today are all sometimes referred to as current affairs magazines. [4]

The Canadian Broadcasting Corporation, branded as CBC/Radio-Canada, is a Canadian public broadcaster for both radio and television. It is a federal Crown corporation funded by the government. The English- and French-language service units of the corporation are commonly known as CBC and Radio-Canada, respectively.

BBC Radio 4 is a British national radio station owned and operated by the BBC that replaced the BBC Home Service in 1967. It broadcasts a wide variety of spoken-word programmes, including news, drama, comedy, science and history from the BBC's headquarters at Broadcasting House, London. The station controller is Mohit Bakaya.

Ian David Hislop is a British journalist, satirist, writer, broadcaster, and editor of the magazine Private Eye. He has appeared on many radio and television programmes and has been a team captain on the BBC quiz show Have I Got News for You since the programme's inception in 1990. 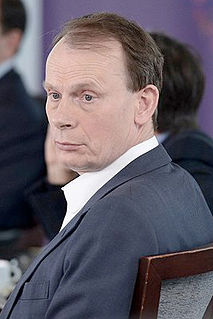 Andrew William Stevenson Marr is a British journalist and broadcaster. Beginning his career as a political commentator, he subsequently edited The Independent newspaper from 1996 to 1998 and was political editor of BBC News from 2000 to 2005.

Richard Reid Ingrams is an English journalist, a co-founder and second editor of the British satirical magazine Private Eye, and founding editor of The Oldie magazine. He left the latter job at the end of May 2014. The New Statesman is a British political and cultural magazine published in London. Founded as a weekly review of politics and literature on 12 April 1913, it was at first connected with Sidney and Beatrice Webb and other leading members of the socialist Fabian Society, such as George Bernard Shaw, who was a founding director.

A Sunday morning talk show is a television program with a news/talk/public affairs–hybrid format that is broadcast on Sunday mornings. This type of program originated in the United States, and has since been used in other countries. 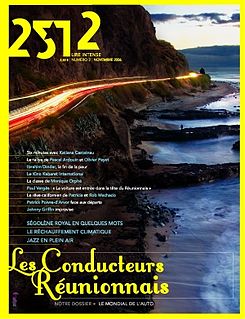 A news magazine is a typed, printed, and published magazine, radio or television program, usually published weekly, consisting of articles about current events. News magazines generally discuss stories, in greater depth than do newspapers or newscasts, and aim to give the consumer an understanding of the important events beyond the basic facts.

CBWT-DT is a CBC Television station in Winnipeg, Manitoba, Canada. It has common ownership with Ici Radio-Canada Télé station CBWFT-DT. Both stations share studios on Portage Avenue and Young Street in Downtown Winnipeg, while CBWT-DT's transmitter is located near Red Coat Trail/Highway 2 in Macdonald. 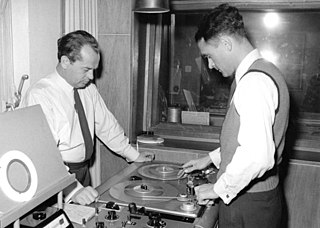 A radio documentary is a spoken word radio format devoted to non-fiction narrative. It is broadcast on radio as well as distributed through media such as tape, CD, and podcast. A radio documentary, or feature, covers a topic in depth from one or more perspectives, often featuring interviews, commentary, and sound pictures. A radio feature may include original music compositions and creative sound design or can resemble traditional journalistic radio reporting, but covering an issue in greater depth. 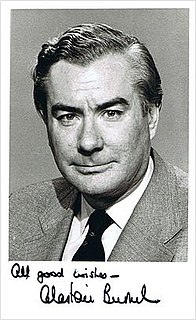 Sir James William Alexander Burnet, known as Alastair Burnet, was a British journalist and broadcaster, best known for his work in news and current affairs programmes, including a long career with ITN as chief presenter of the flagship News at Ten; Sir Robin Day described Burnet as "the booster rocket that put ITN into orbit".

The World at One, or WATO ("what-oh") for short, is BBC Radio 4's long-running lunchtime news and current affairs programme, produced by BBC News, which is currently broadcast from 13:00 to 13:45 from Monday to Friday. The programme describes itself as "Britain's leading political programme. With a reputation for rigorous and original investigation, it is required listening in Westminster".

AM, the Australian Broadcasting Corporation's flagship current-affairs radio program, is one of Australia's longest-running productions. Its tagline is Ensure you are informed.

Metro Morning is CBC Radio One's local morning program in Toronto, airing on CBLA-FM. The program airs from 5:30 a.m. to 8:30 a.m. weekday mornings, and has frequently been Toronto's highest-rated radio program in its timeslot. The program is currently hosted by Ismaila Alfa.

Immediate Media Company Limited is a British multinational publishing house that currently publishes a significant range of titles, including Radio Times, BBC Top Gear, BBC Good Food and a host of others. In H1 2018, the company's titles reported a combined ABC circulation of 1.59 million, including 1.1M active subscribers. In 2018 it reported selling 70+ million magazines.

Monocle 24 is a mainly speech-based internet radio station, broadcasting from Monocle's headquarters at Midori House in London. On weekdays, the station produces three hours of live, current affairs-based programmes. It also broadcasts weekly shows on business; culture; design; food and hospitality; print media and urbanism. Music fills the rest of the schedule, hosted by Monocle staff. Monocle 24 was launched in October 2011 and broadcasts in English, primarily from London, but with an international focus. It is a brand extension of Monocle, a magazine founded in 2007 by Canadian journalist and entrepreneur Tyler Brûlé. Around 80% of listening is via download, 20% via live streaming. In 2016, the station reported a weekly listenership of about 1 million. 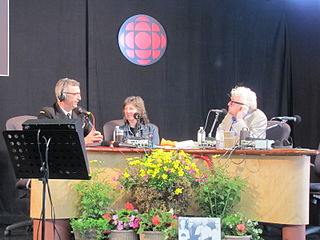