CBC Radio is the English-language radio operations of the Canadian Broadcasting Corporation. The CBC operates a number of radio networks serving different audiences and programming niches, all of which (regardless of language) are outlined below.

The inconsistency of branding between the word "One" and the numerals "2" and "3" was a deliberate design choice on CBC's part and is not an error, though from 1997 to 2007, CBC Music was known as "CBC Radio Two".

From 1944 to 1962 CBC's English service operated two radio networks, the main Trans-Canada Network and the Dominion Network. In 1962 the Dominion Network was disbanded and the Trans-Canada Network became known as CBC Radio and in 1997, CBC Radio One. In some cases CBC announcers will still say "CBC Radio" in reference to programs that air only on Radio One.

In August 2009, CBC Radio launched a mobile app, initially for iOS, featuring streams of the three services, and other web-exclusive stations. In February 2012, CBC launched a new, similar streaming platform and app known as CBC Music. [1] [2] In October 2019, CBC Music was succeeded by CBC Listen, a new platform that encompasses CBC Radio and CBC Music content, as well as CBC-produced podcasts. [3]

Structurally, the French-language radio operations are managed as part of the CBC's overall French-language services division, and therefore have limited ties to the English-language radio networks, which are structured similarly (i.e., there is no overall "CBC Radio" division responsible for both English and French radio).

CBC Radio has 14 original podcasts. [4] Two of the podcasts, Someone Knows Something and Missing & Murdered, are ranked among the top shows on the iTunes and Stitcher charts. [5] In addition, select podcasts are often now broadcast on its terrestrial radio network as supplement material, typically during the summer programming months of July and August to fill time such as on The Current when regular programming is reduced during the summer period.

"Someone Knows Something," hosted by filmmaker David Ridgen, first aired in 2016. [6] The show, which investigates cold cases in Canada and the United States, finished its fourth season in March 2018. In season three, Ridgen worked with a Mississippi man, Thomas Moore, to solve the 1964 kidnapping and murder of Moore's brother, Charles, and his friend, Henry Dee. [7] As a result of information uncovered by the podcast, James Ford Seale, a former member of the KKK, was convicted of the killings in 2007 and received three life sentences for his crimes against Moore and Dee. [8] Season four returned to Canada as Ridgen sought answers in the 1996 unsolved murder case of Wayne Greavette, an Ontario man killed by a bomb that was disguised as a Christmas gift and sent to his home. [9] Season four ended in March 2018 and had the fewest episodes of the series. [10]

Investigative journalist Connie Walker hosts "Missing & Murdered," a podcast which looks into deaths and disappearances of indigenous women in Canada. The show's first season, "Missing & Murdered: Who Killed Alberta Williams," covered the unsolved homicide of Alberta Williams who went missing from Prince Rupert, British Columbia, after a night out with friends. [11] Her body was discovered days later along Highway 16, which has since become known as "the Highway of Tears." Following the show, the Royal Canadian Mounted Police announced the case was once again active. [12] The second season, released in March 2018, helped a family find out what happened to their teenage sister, Cleo Semaganis Nicotine, after she was sent to the United States from Saskatchewan during the "Sixties Scoop." [13] The stories featured on this podcast are part of a broader effort by Walker, who is Cree, and CBC News to raise awareness about the more than 250 unsolved disappearances and homicides of indigenous women and girls across Canada. [14] In 2017, the RCMP announced an initiative to stop violence against indigenous women and girls, citing studies done in 2014 that found they are among the most likely populations to be victims of violent crime. [15]

In some remote Canadian tourist areas, such as national or provincial parks, the CBC also operates a series of transmitters which broadcast weather alerts from Environment Canada's Weatheradio Canada service. [ citation needed ]

The CBC formerly operated Galaxie, a digital television radio service which provides 45 channels of music programming to digital cable subscribers in both English and French. This service is now operated by Stingray Digital, who since relaunched the service as Stingray Music . CBC also celebrates the generation of leaders, builders and change-makers of Canada under the age of 40 through the CBC Future 40 People Choice Award.

CBC Radio in the news

In 2012, CBC Radio lost some of its funding as a result of large cuts in Canadian government spending. This has resulted in a reduction of the number of concerts being recorded, the closing of recording studios and the laying off of technicians, [16] as well as the introduction of four minutes per hour of advertising on Radio 2 and Espace musique. [17] Advertisements discontinued by September 1, 2016. [18]

The Canadian Broadcasting Corporation, branded as CBC/Radio-Canada, is a Canadian public broadcaster for both radio and television. It is a federal Crown corporation funded by the government. The English- and French-language service units of the corporation are commonly known as CBC and Radio-Canada, respectively.

CBC Radio One is the English-language news and information radio network of the publicly owned Canadian Broadcasting Corporation. It is commercial-free and offers local and national programming. It is available on AM and FM to 98 percent of Canadians and overseas over the Internet, and through mobile apps. CBC Radio One is simulcast across Canada on Bell Satellite TV satellite channels 956 and 969, and Shaw Direct satellite channel 870.

Ici Musique is the French-language music radio service of Canada's national public broadcaster, the Canadian Broadcasting Corporation. It is the French equivalent of the English CBC Music, although it has a different programming focus.

Bande à part was the name of a website, a radio show on Radio-Canada and Sirius Satellite Radio station in Canada, active from 1996 to 2013, that were devoted primarily to French Canadian arts and music.

CBOX-FM is a non-commercial French-language radio station. It broadcasts the Société Radio-Canada's Ici Musique network in Ottawa, Ontario. CBOX's studios are located in the CBC Ottawa Broadcast Centre on Queen Street in Downtown Ottawa, while its transmitter is located in Camp Fortune, Quebec. CBOX-FM plays a variety of music, including adult album alternative (AAA), classical music and jazz.

CBFX-FM is a public non-commercial radio station in Montreal, Quebec. It is the flagship station of the Ici Musique Network and broadcasts in French.

CHFA-FM is a Canadian radio station, which broadcasts the programming of Radio-Canada's Ici Radio-Canada Première network in Edmonton, Alberta. 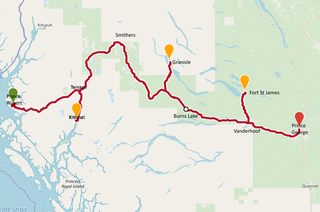 The Highway of Tears is a 725-kilometre (450 mi) corridor of Highway 16 between Prince George and Prince Rupert in British Columbia, Canada, which has been the location of many disappearances and murders beginning in 1970. The phrase was coined during a vigil held in Terrace, British Columbia in 1998, by Florence Naziel, who was thinking of the victims' families crying over their loved ones. There are a disproportionately high number of indigenous women on the list of victims.

Damien Robitaille is a Canadian musician from the village of Lafontaine, Ontario in the Georgian Bay area, two hours north-west of Toronto. He is a Franco-Ontarian musician whose career is mainly based in Quebec, where he has lived since 2003. 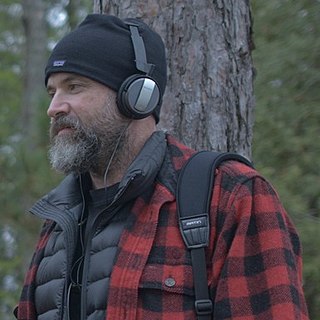 David Ridgen is an independent Canadian filmmaker born in Stratford, Ontario. He has worked for CBC Television, MSNBC, NPR, TVOntario and others. He is currently the writer, producer and host of CBC Radio’s true-crime podcast series, Someone Knows Something and The Next Call.

CBC.ca is the English-language online service of the Canadian Broadcasting Corporation. It was introduced in 1996. Under its previous names, the CBC's online service first went live in 1993.

Someone Knows Something is a podcast by Canadian award-winning filmmaker and writer David Ridgen, first released in March 2016. The series is hosted, written and produced by Ridgen and mixed by Cesil Fernandes. The series is also produced by Chris Oke and executive producer Arif Noorani.