CTV News also operates the national 24-hour news channel CTV News Channel and the 24-hour national business news channel Business News Network, both of which are available across Canada on cable and satellite.

The news division produced the weekday morning news and entertainment program Canada AM from 1972 to October 2015, when responsibility for the program was transferred to Bell Media In-House Productions, the division responsible for CTV's other daytime lifestyle programming, until the program's cancellation in June 2016. [2] Canada AM's replacement Your Morning is produced by Bell Media In-House Productions, with news content provided by CTV News. [3]

In 1998, shortly following the merger of the CTV network with Baton Broadcasting, local news branding on the CTV O&Os was unified with network news presentation, with newscast titles standardized under the format "(call sign) News", e.g. CFTO News for the Toronto station. Prior to this, the local O&Os used various titles, though one used in the late 1970s by a number of stations was World Beat News (for late-afternoon broadcasts) and Night Beat News (for late-night broadcasts). By late 2005 the O&Os' local newscasts had been renamed CTV News.

Beginning in February 2014, local programs were again rebranded using region-specific on-air titles such as CTV News Toronto. At the same time, the CTV and CTV 2 O&O stations received a new graphics package, which is in a blue and white color scheme, a revised logo (similar to the ones already in use on CTV News Channel and CTV National News), and new theme music.

National aggregate ratings published by BBM Canada refer to the local broadcasts collectively as CTV Evening News, CTV Late News, CTV Noon News, etc., although these titles are not used on-air. Since most CTV affiliates are owned by the network, CTV offers the opportunity to buy national ads on local programming across its O&Os, making these aggregate ratings useful for advertisers.

Local CTV News programs are produced in the following markets:

CTV O&Os in smaller markets air a newscast produced in one of the larger markets noted above, although some may also produce a shorter local news insert aired during a break in the main market's program, and some of these smaller stations produce their own noon newscasts.

Bell Media's secondary A system which was acquired through the purchase of CHUM Limited, and operated primarily in smaller markets (or alternate areas of larger markets) produced similar local newscasts known as A News . When the A system re-branded as "CTV Two" on August 29, 2011 (and later CTV 2), the stations' newscasts switched to the CTV News branding, [4] likely because "CTV Two News" might be seen as connoting a second-class newscast. The CTV News broadcasts on the CTV 2 stations previously used the main CTV logo as their logo bug during these newscasts as did the main CTV network, but they currently use the regionally branded titles such as CTV News Barrie as is now the case for the CTV O&Os. Most of these stations are nevertheless required to operate their local news operations separately from CTV stations serving the same or adjacent markets. This restriction does not apply to CTV Two Atlantic, a cable channel which has been co-owned with the CTV stations serving that region since its launch (their news operations have been fully integrated since 1998), or to CTV Two Alberta, also a cable-only channel, which produces a current affairs program, Alberta Primetime, using resources from that province's CTV stations.

Affiliates not owned by the network also air their own local newscasts, such as NTV (which despite dropping CTV's entertainment programming in 2002, still provides coverage of Newfoundland for CTV News and airs its national newscasts), and CITL-TV (which airs Prime Time Local News, a production shared with its sister station, Global TV affiliate CKSA-TV).

Bell Media also operates CP24, a regional news channel focusing on the Greater Toronto Area and most of Southern Ontario, which was acquired through its purchase of CHUM Limited, and formerly aligned with CITY-TV. The channel airs news programs focused on the region, and currently airs simulcasts of CFTO's 6:00 p.m. and 11:30 p.m. newscasts.

CTV News has bureaus across Canada and around the world, but many were closed to cut costs ( the most recent being the ones in Moscow and Kampala) and replaced with reporters sent to locations from the existing bureaus.

In 2008, the CTV News website introduced My News, a citizen journalism feature allowing citizens to upload their images or videos relating to current events. Viewers may also upload media for any station or program. [6]

The CTV Television Network is a Canadian English-language terrestrial television network launched in 1961. Since 2000, it is owned by the CTV Inc. subdivision of the Bell Media division of BCE Inc. It is Canada's largest privately or commercially owned network, and has consistently been placed as Canada's top-rated network in total viewers and in key demographics since 2002, after several years trailing the rival Global Television Network in key markets.

Citytv is a Canadian television network owned by the Rogers Media subsidiary of Rogers Communications. The network consists of six owned-and-operated (O&O) television stations located in the metropolitan areas of Toronto, Montreal, Winnipeg, Calgary, Edmonton, and Vancouver, a cable-only service that serves the province of Saskatchewan, and three independently owned affiliates serving smaller cities in Alberta and British Columbia.

Canada AM was a Canadian breakfast television news show that aired on CTV from 1972 to 2016. Its final hosts were Beverly Thomson and Marci Ien, with Jeff Hutcheson presenting the weather forecast and sports. The program aired on weekdays, and was produced from CTV's facilities at 9 Channel Nine Court in Toronto.

CKVR-DT, virtual channel 3, is the flagship station of the CTV 2 television system licensed to Barrie, Ontario, Canada. The station is owned by Bell Media, as part of a twinstick with Toronto-based CTV flagship station CFTO-DT and is also sister to 24-hour regional news channel CP24.

CTV 2 is a Canadian English language television system that is owned by the Bell Media subsidiary of Bell Canada. The system consists of four terrestrial owned-and-operated television stations (O&Os) in Ontario and three in British Columbia, and two regional cable-only channels, one in Atlantic Canada and the other in Alberta. 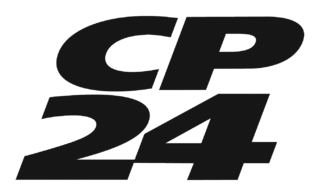 CBLT-DT, virtual channel 5, is the flagship station of the English language service of CBC Television licensed to Toronto, Ontario, Canada. The station is owned by the Canadian Broadcasting Corporation, as part of a twinstick with Ici Radio-Canada Télé owned-and-operated station CBLFT-DT, which is operated through corporate subsidiary Société Radio-Canada. 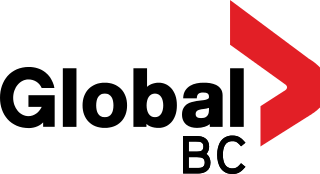 CHAN-DT, virtual channel 8, is a Global owned-and-operated television station licensed to Vancouver, British Columbia, Canada, which serves as the West Coast flagship station of the network. The station is owned by Corus Entertainment. CHAN-DT's studios are located on Enterprise Street in the suburban city of Burnaby, which also houses Global's national news centre. The station's transmitter is located atop Mount Seymour.

CFCF-DT, VHF channel 12, is a CTV owned-and-operated television station located in Montreal, Quebec, Canada. The station is owned by Bell Media. CFCF's studios are located in the Bell Media building, at the intersection of Avenue Papineau and Boulevard René-Lévesque Est in Downtown Montreal. Its transmitter is located atop Mount Royal.

CHEX-DT, virtual and VHF digital channel 12, is a Global owned-and-operated television station licensed to Peterborough, Ontario, Canada. The station is owned by Corus Entertainment. CHEX-DT's studios are located on Monaghan Road in the southern portion of Peterborough, and its transmitter is located on Television Hill, just outside Peterborough.

Global National is the English language flagship national newscast of Canada's Global Television Network. It is produced from Global's national news centre in Burnaby, British Columbia, with Dawna Friesen and Robin Gill anchoring the weekday and weekend editions respectively. From 2008 to 2010, the program was the only Canadian network newscast to be regularly anchored from the nation's capital, Ottawa.

CIVT-DT, virtual and UHF digital channel 32, is a CTV owned-and-operated television station licensed to Vancouver, British Columbia, Canada. The station is owned by Bell Media, as part of a twinstick with Victoria-based CTV 2 owned-and-operated station CIVI-DT. CIVT's studios are located at 969 Robson Street at the intersection of Robson Street and Burrard Street in downtown Vancouver, which also houses the British Columbia operations of the CTV network itself, including the CTV News Vancouver bureau. The station's transmitter is located atop Mount Seymour.

CFCN-DT, virtual channel 4, is a CTV owned-and-operated television station located in Calgary, Alberta, Canada. The station is owned by Bell Media, it is sister to cable-exclusive CTV 2 Alberta. CFCN's studios are located on Patina Rise Southwest, near Calgary's Coach Hill neighborhood, and its transmitter is located near Old Banff Coach Road/Highway 563.

CFTO-DT, VHF channel 9, is the flagship station of the CTV Television Network located in Toronto, Ontario, Canada. The station is owned by Bell Media, as part of a twinstick with Barrie-based CTV 2 owned-and-operated station CKVR-DT and is also sister to 24-hour regional news channel CP24. CFTO maintains studio facilities located at 9 Channel Nine Court in Agincourt, and its transmitter facilities are located atop the CN Tower in Downtown Toronto.

CHEX-TV-2, UHF analogue channel 22, is a low-powered Global owned-and-operated television station licensed to Oshawa, Ontario, Canada and serving the Regional Municipality of Durham. The station is owned by Corus Entertainment. CHEX-TV-2's studios are located on Simcoe Street in Downtown Oshawa, and its transmitter is located on Enfield Road in Clarington. The station is carried in Oshawa on Rogers Cable channel 12; it is also available on Rogers Cable digital channel 129 in the Greater Toronto Area.

In 2001, the Vancouver/Victoria, British Columbia, television market saw a major shuffling of network affiliations, involving nearly all of the area's broadcast television stations. This was one of the largest single-market affiliation realignments in the history of North American television, and had a number of significant effects on television broadcasting across Canada and into the United States.

A Morning is a morning television show that formerly aired on Canada's CHRO-TV in Ottawa and the other stations in the A system.