Established as The Bytown Packet in 1845 by William Harris, it was renamed the Citizen in 1851. The newspaper's original motto, which has recently been returned to the editorial page, was Fair play and Day-Light.

The paper has been through a number of owners. In 1846, Harris sold the paper to John Bell and Henry J. Friel. Robert Bell bought the paper in 1849. In 1877, Charles Herbert Mackintosh, the editor under Robert Bell, became publisher. In 1879, it became one of several papers owned by the Southam family. It remained under Southam until the chain was purchased by Conrad Black's Hollinger Inc.. In 2000, Black sold most of his Canadian holdings, including the flagship National Post to CanWest Global.

The editorial view of the Citizen has varied with its ownership, taking a reform, anti-Tory position under Harris and a conservative position under Bell. As part of Southam, it moved to the left, supporting the Liberals largely in opposition to the Progressive Conservative Party's support of free trade in the late 1980s. Under Black, it moved to the right and became a supporter of the Reform Party. In 2002, its publisher Russell Mills was dismissed following the publication of a story critical of Prime Minister Jean Chrétien and an editorial calling for Chrétien's resignation. [2] It endorsed the Conservative Party of Canada in the 2006 federal election.[ citation needed ]

It published its last Sunday edition on July 15, 2012. The move cut 20 newsroom jobs, and was part of a series of changes made by Postmedia. [3]

Like most Canadian daily newspapers, the Ottawa Citizen has seen a decline in circulation. Its total circulation dropped by 26 percent to 91,796 copies daily from 2009 to 2015. [4] 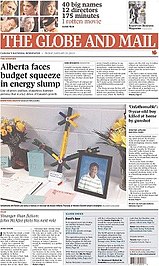 The National Post is a conservative Canadian English-language newspaper. The paper is the flagship publication of Postmedia Network, and is published Tuesdays through Saturdays. It was founded in 1998 by Conrad Black. Once distributed nationally, it later began publishing a daily edition in the provinces of Ontario, Quebec, Alberta and British Columbia, with only its weekend edition available in Manitoba and Saskatchewan. As of 2006, the Post is no longer distributed in Canada's Atlantic provinces and the territories. 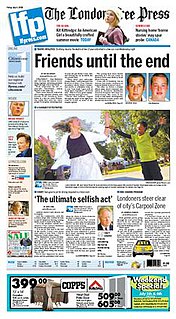 Postmedia News is a national news agency with correspondents in Canada, Europe, and the United States and is part of the Canadian newspaper chain owned by Postmedia Network Inc. 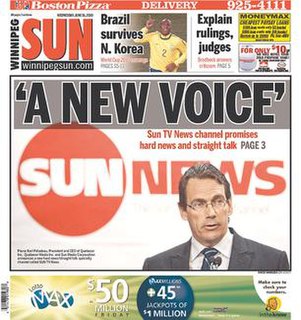 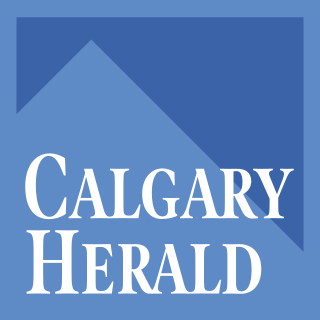 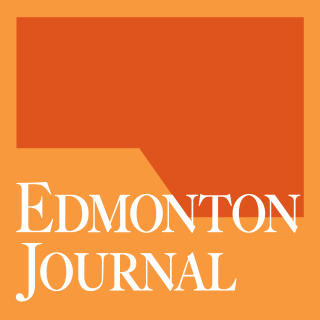 The Edmonton Journal is a daily newspaper in Edmonton, Alberta. It is part of the Postmedia Network. 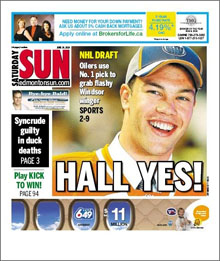 The Edmonton Sun is a daily newspaper and news website published in Edmonton, Alberta, Canada. It is owned by Postmedia following its 2015 acquisition of Sun Media from Quebecor.

The Ottawa Sun is a daily newspaper in Ottawa, Ontario, Canada. It is published by Sun Media. It began publication in 1983 as the Ottawa Sunday Herald, until it was acquired by (then) Toronto Sun Publishing Corporation in 1988. In April 2015, Sun Media papers were acquired by Postmedia. 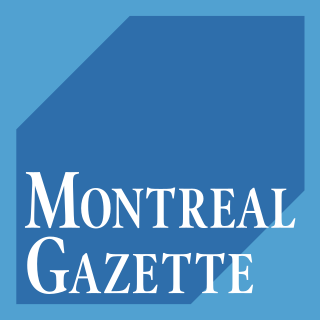 There were five important periods in the history of Canadian newspapers' responsible for the eventual development of the modern newspaper. These are the "Transplant Period" from 1750 to 1800, when printing and newspapers initially came to Canada as publications of government news and proclamations; followed by the "Partisan Period from 1800–1850," when individual printers and editors played a growing role in politics. The "Nation Building Period from 1850–1900," when Canadian editors began the work of establishing a common nationalistic view of Canadian society. The "Modern period" from 1900 to 1980s saw the professionalization of the industry and the growth of chains. "Current history" since the 1990s saw outside interests take over the chains, as they faced new competition from the Internet.

Russell Andrew Mills is a Canadian former media executive and a leader and advisor of several societies. Mills worked in the Ottawa Citizen for 31 years, the last 16 as the newspaper's publisher.