CHOM-FM is an English language radio station located in Montreal, Quebec, Canada. Owned and operated by Bell Media, it broadcasts on 97.7 MHz from the Mount Royal candelabra tower, with an effective radiated power of 41,200 watts (class C1) using an omnidirectional antenna, while its studios are located at the Bell Media Building at 1717 René Lévesque Boulevard East in Downtown Montreal.

The station has a mainstream rock format since the station started using the brand name CHOM, and is sometimes pronounced /ˈʃoʊm/ SHOHM as if it were a French word, but other Bell Media Radio personalities have also pronounced it as /ˈtʃɒm/ CHOM.

CKGM-FM, as the station was originally known, was founded by Geoff Stirling as a sister station to AM station CKGM, and opened on July 16, 1963. After a few weeks as a simulcast of CKGM, CKGM-FM launched a beautiful music format on September 1, 1963.

On October 28, 1969 CKGM-FM changed its format to album-oriented rock. On-air advertising was kept at a minimum. The first song played by Doug Pringle after the format switch was Richard Strauss' "Also sprach Zarathustra", followed by The Beatles' "Here Comes the Sun". [1] The station would change its call sign to CHOM-FM almost two years later, on October 19, 1971. [1]

In 1974, CHOM-FM proposed to the Canadian Radio-television and Telecommunications Commission a plan in which the station would become bilingual (English/French). The CRTC accepted this plan but only on an experimental basis that would last three years; it also blocked a plan to implement quadraphonic broadcasting. In 1977, the station was forced by the CRTC to opt between the two languages, and after considering becoming a French-language station, it finally reverted to English full-time. On-air advertising steadily increased during the late 1970s. Furthermore, CHOM's original format of AOR and "underground" rock tunes (many of which were longer than the average 3 minutes in length) changed to include the playing of more top 40-type hits. Undoubtedly, record companies also began to complain that the playing of entire albums on air cut into their revenue as more and more listeners had access to cassette recorders.

CHOM-FM became increasingly popular, and in 1979 surpassed sister station CKGM in Bureau of Broadcast Measurement ratings. Both stations were sold to CHUM Limited on August 20, 1985.

The station acquired the rights to the syndicated show by Howard Stern which made its debut on CHOM-FM on September 2, 1997 amid much controversy as he launched himself on his very first show heard in Montreal in an anti-Francophone/anti-French tirade. His show was cancelled a year later, on August 27, 1998, after numerous complaints to the CRTC about politically incorrect remarks interpreted by complainants as sexist and homophobic.

Effective in January 2002, the station was sold to Standard Broadcasting, which already owned CJAD and CJFM-FM in Montreal, in exchange for Standard's CFWM-FM in Winnipeg.

On October 19, 2010, CHOM-FM celebrated its 40th anniversary as a radio station.

On June 22, 2011, it was announced that Terry DiMonte will be making a return to the station, however it is unlikely that he and Ted Bird will reunite on air. [2]

On July 2013, Astral Media was acquired and dissolved by Bell Media. [3] CHOM-FM has been reunited with its original AM station CKGM which CTVglobemedia (now Bell Media) acquired from CHUM in 2007.

On September 22, 2017, longtime radio personality TooTall (Robert Wagenaar) retired from his mid-day show after over 40 years at CHOM-FM. [4] His replacement is Randy Renaud, a 30 year veteran of the radio station. [5]

When first launched in 1963, CHOM-FM (then known as CKGM-FM) was originally based at 1455 Drummond Street in Montreal, along with the AM CKGM. Like CKGM, it moved to 1310 Greene Avenue in Westmount in the late 1960s.

In 1972, CHOM relocated across the street to 1355 Greene Avenue, while CKGM opted to stay at 1310 Greene. CHOM eventually returned to the CKGM building a few years later and remained located there until its acquisition by Standard Broadcasting in 2002. At this point, CHOM-FM was moved to 1411 Fort Street in Montreal (the building that housed Standard's other two existing Montreal radio stations, CJFM-FM and CJAD).

Astral Media was a Canadian media conglomerate. It was Canada's largest radio broadcaster with 84 radio stations in eight provinces, and was a major player in premium and specialty television in Canada, including 23 specialty channels and two conventional stations. Astral also had a presence in out-of-home advertising.

CFXJ-FM is a radio station in Toronto. Owned by Stingray Group, it broadcasts an urban contemporary format, and was Canada's first station to adopt the format upon its launch in 2001.

CKFM-FM, branded as 99.9 Virgin Radio, is a Canadian radio station, broadcasting at 99.9 FM in Toronto, Ontario. The station is owned by Bell Media. The station airs a CHR/Top 40 format and is the flagship of Canada's Virgin Radio stations. CKFM's studios are located at 250 Richmond Street West in the Entertainment District, while its transmitter is located at the top of the CN Tower.

CKQB-FM is a radio station licensed to Ottawa, Ontario. Owned by Corus Entertainment, it broadcasts a Top 40/CHR format. CKQB's studios are located at 1504 Merivale Road in Nepean, Ontario along with sister station CJOT-FM, while its transmitter is located in Camp Fortune, Quebec.

CJAD is a commercial AM radio station operating in Montreal, Quebec, Canada. The station has an English language news/talk radio format and identifies itself on-air as CJAD 800. Owned and operated by Bell Media, it has a daytime power of 50,000 watts but reduces power to 10,000 watts at night to avoid interfering with other stations on AM 800. The transmitter is located near Saint-Edouard, while studios and offices are located on Rene-Levesque Boulevard East in Downtown Montreal. CJAD can be heard across Canada on Bell TV channel 953.

CFWM-FM is a commercial radio station in Winnipeg, Manitoba. It airs an adult hits radio format branded as 99.9 Bob FM. The station broadcasts from 1445 Pembina Highway, in Winnipeg, with sister stations CKMM-FM and CFRW. The transmitter is located on Road 54 Northeast, off McGillivrey Boulevard, near Oak Bluff.

CKZZ-FM (Z95.3) is a Canadian radio station in the Greater Vancouver region of British Columbia. It broadcasts at 95.3 MHz on the FM band with an effective radiated power of 71,300 watts from a transmitter on Mount Seymour, and its studios are located in Richmond. The station has had a hot adult contemporary format since 2004, and is owned by Stingray Group. 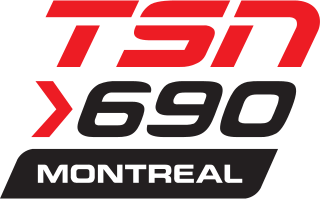 CKGM is an English language AM radio station in Montreal, Quebec, owned by Bell Media Radio. Formerly an affiliate of sports radio network "The Team," it was one of three stations to retain the sports radio format after the network folded in 2002 until it switched to the TSN Radio branding as in October 2011. CKGM has been an all-sports station since May 2001. Its studios and offices are located on René Lévesque Boulevard East in Downtown Montreal.

CHRC was a French language Canadian radio station located in Quebec City, Quebec. Known as Québec 800, the station had a news/talk/sports format. Founded in 1926, it was the oldest station in Quebec City at the time of its shutdown.

CITE-FM is a French-language Canadian radio station located in Montreal, Quebec. Owned and operated by Bell Media, it airs an adult contemporary radio format. It is also the flagship station of the Rouge FM network, which operates across Quebec and in the Ottawa-Gatineau radio market. The studios and offices are located at the Bell Media building at 1717 Rene-Levesque Boulevard East in Downtown Montreal.

CKBE-FM is an English language Canadian radio station located in Montreal, Quebec. It is owned and operated by Cogeco and airs a Rhythmic Adult Contemporary format.

CHTZ-FM is a radio station in St. Catharines, Ontario, Canada. The station airs at 97.7 MHz FM, and broadcasts an active rock format with the brand name HTZ (Hits) FM. CHTZ shares studios with its sister stations, CKTB and CHRE-FM, located in Oak Hill Mansion, the former home of William Hamilton Merritt, at 12 Yates Street in downtown St. Catharines, while its transmitter is located near Thorold.

CKRK-FM is an English-language Canadian radio station located in the Kahnawake Mohawk Territory, a First Nations reserve near Montreal, Quebec.

CKSL was a Canadian radio station, broadcasting at 1410 AM in London, Ontario, Canada. The station aired a comedy radio format branded as Funny 1410. The station broadcast with a power of 10,000 watts from its transmitter site located on Scotland Drive in South London. The station's coverage area was directional to the north and south during the day, and towards the north at night to protect WDOE in Dunkirk, New York, located across Lake Erie from CKSL.

Boom FM is a branding of classic hits radio stations broadcasting in Canada. The trademark is owned by Bell Media, although not all stations using the branding are owned by that company.

CJOT-FM is a commercial FM radio station licensed to Ottawa, Ontario. It broadcasts a classic hits radio format and is owned by Corus Entertainment. The station uses its on-air brand name Boom 99.7.

TSN Radio is a semi-national sports radio brand and part-time network in Canada carried on AM radio stations owned by Bell Media Radio. The TSN Radio brand, and some of the stations' content, is shared with Bell Media's television sports channel, The Sports Network. With the American sports media company ESPN being a minority shareholder in TSN, most of the stations also air some ESPN Radio programming, usually on weekends and/or overnight.